The Time Is Now For The Washington Mystics

The Washington Mystics demolished the Atlanta Dream on Wednesday to earn a share of first place in the Eastern Conference. Led by the play of Crystal Langhorne, the Mystics are poised to take their place as one of the DMV's favored franchises.

Share All sharing options for: The Time Is Now For The Washington Mystics

The Washington Mystics are playing on borrowed time. In a few short weeks, the DMV region's attention will turn back to it's masochistic relationship with the Redskins, the Wizards will start training camp and Alexander Ovechkin will return from Russia and begin another Don Quixote-esque quest for the Stanley Cup.

For now, though, the Mystics only have to share the stage with the Nationals and D.C. United, who suffer from the same perceived lack of attention as the Mystics. And they have a leg up in one major way, one that matters more in this area than outsiders realize.

Wednesday's win over the Atlanta Dream earned the Mystics share of first place in the WNBA's Eastern Conference, and local media is starting to notice. The few media members who have been covering the team for the entirety of the season were stunned to find themselves surrounded on Wednesday by colleagues who had been absent all season. Coach Julie Plank's first words upon entering the press room were "Wow, what a great turnout." Several Mystics players in the postgame interview session openly marveled at the presence of so many new faces and video cameras in the locker room. Whether fair or not, the Mystics are now back on Washington's radar. 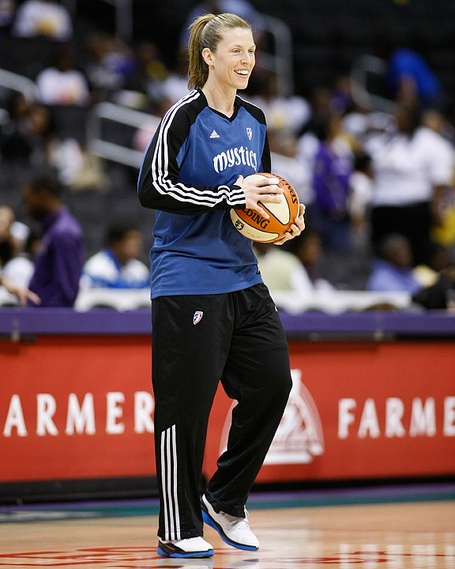 As with any newly discovered story, media members are constructing narratives to make the team appealing to a casual audience. Thus, Crystal Langhorne has been transformed from an eye-opening talent to a franchise savior, Katie Smith become the grizzled veteran providing a steadying influence and Matee Ajavon and Marissa Coleman become vital super-subs that swing the balance of games. We embrace these narratives because it gives us an instant affection for the team, and they serves as a valuable primer for us fans as we try to reacquaint ourselves with D.C.'s other re-emergent basketball team.

But the truth of the matter is that these perceived character traits have on display all year right under the DMV's nose. These narratives will help the Mystics gain support it the coming weeks, but it would be a disservice to both the team and the organization to deny that this has been happening all year. The team's current standing in the WNBA is not a fluke. It has been the result of steady managerial planning. 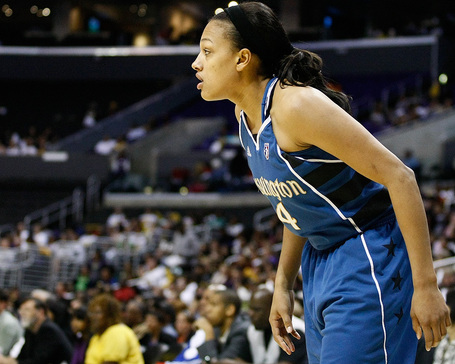 The Mystics were dismissed coming into the season largely because of the season-ending injury to guard Alana Beard, the Mystics best and most marketable player. The four-time All-Star, who averaged 15.9 points per game last season, underwent ankle surgery in April and has missed the entire 2010 season. With her out of action, most pundits dismissed Washington's chances of succeeding in the competitive Eastern Conference.

But Mystics General Manager Angela Taylor  believed that the organization had assembled the talent necessary to remain competitive despite Beard's absence. She says the team was close to achieving a breakthrough last season, when they finished 16-18, and had a better offseason than anyone realized.

"A bounce here, a bounce there and we really could have challenged Indiana to go further in the playoffs [last season]," she says. "We came into this season knowing that if we added a couple of key pieces and we tweaked a couple things we could be a potent team."

Taylor says this season's success has been a true team effort, citing the accomplishments of guard Lindsey Harding, forward Monique Currie and center Crystal Langhorne. Langhorne, a third-year center player from Maryland that was last season's Most Improved Player, has become a borderline MVP candidate, averaging 17.2 points and 10 rebounds per game, while Harding and Currie provide the necessary perimeter punch to complement Langhorne's inside dominance.

But it's not just those three players. The Mystics won a bidding war in the offseason for 36-year-old guard Katie Smith, a two-time WNBA champion and multiple-time All-Star. Smith is past her prime, but is the kind of veteran player that brings a winning culture everywhere she goes. For those old-school NBA fans, Smith is the Mystics' answer to former Bullet great Bobby Dandridge, who brought the necessary winning culture that finally put those great 70s Bullets teams over the top in 1978.

"We felt like we had a a very successful offseason in adding Katie Smith, a legend in her own right, who brings so much to women's basketball both on and off the court."

And then there's the rest of the squad. As Plank noted, Wednesday's victory in particular had a lot to do with the contributions of the Mystics bench.

"We had almost eight players playing twenty minutes, and that's how we are going to win," she said. "I don't like overloading people and playing them 36, 37 minutes. Our bench is key."

Taylor, however should get a large amount of the credit for the team's success this season. Prior to her taking over as Mystics' GM in 2008, the team had perennially underachieved or finished in the lower half of their conference. When Taylor interviewed for the Mystics, she said she had a "vision" for the franchise. I asked Taylor to explain that vision further and how it has helped the organization make its recent strides

"When I got here the cupboards weren't bare, but there hadn't been a lot of consistency," she said. "[The vision] was really to start to develop the infrastructure that was necessary to foster a winning atmosphere. Winning is a mentality. What we have started to do here is chip away at the players, maybe questioning their ability to win."

That new mentality can be seen in center Nakia Sanford, who has been on the team for seven years. This makes her one of the longest tenured Mystics, so she has dealt with a lot of disappointment. 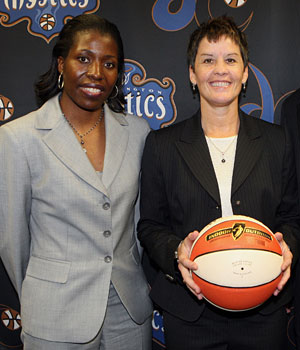 So what of the Mystics place in the DMV's sports psyche? If you ask Taylor, she believes that the organization will always have a place in the region. She said the product is already supported by a loyal group of fans, who will only grow as the team's overall performance improves. To prove it, she pointed to a specific characteristic of the region.

"I really feel that D.C and the DMV is a basketball town," she said. "These fans want to see successful basketball teams, and I have a belief in the fans and the collective community."

Taylor is only partially right in this statement. Football will always be the beating heart of the region, and the area's mood barometer will be judged by the on-field success of the Redskins. However, basketball is a sport with which we have also grown to expect success, due to the achievements of our local college teams and the quality of talent we are producing from our local high schools. The area is desperate for a successful pro basketball franchise, and with the Wizards still a few years away from truly competing, the title is there for the Mystics to take.

So embrace the narrative. Over the next few weeks, make nervous introductions with the new winner in town. I can promise that the entertainment  and delight provided for you will not only tide you over until football season begins, but could be the start of a new sports relationship. Angela Taylor and Julie Plank are building this organization for the long haul, and they would like you come aboard for the ride.