Should The Nationals Be Honoring Andre Dawson?

As we saw again with Andre Dawson being inducted into the Hall of Fame, the Nationals have been reluctant to recognize the franchise's history in Montreal as the Expos. Is this problematic? Federal Baseball's Patrick Reddington discusses the issue with several Nationals writers.

Share All sharing options for: Should The Nationals Be Honoring Andre Dawson?

Back before they moved to Washington D.C., the Washington Nationals went by a different name: the Montreal Expos. If you had forgotten about this, you're not alone. The franchise hasn't exactly done much in its five-and-a-half-year history in the District to honor its past roots.

We saw this once again as The Hawk, Andre Dawson, was inducted into the baseball Hall of Fame. Dawson was quoted in Chicago newspapers saying that he'd prefer to be representing the Cubs, but ultimately, he went into the Hall with an Expos cap. Thus far, the Nationals have done almost nothing to congratulate Dawson and honor him for his achievement. There are reportedly plans to honor Dawson in the nation's capital at some unspecified date in the future, but such plans haven't been announced yet. In fact, another team will honor Dawson before the Nationals do, as Florida owner Jeffrey Loria, of all people, and the Marlins will hold a Hall of Fame Luncheon for Dawson on Aug. 6. 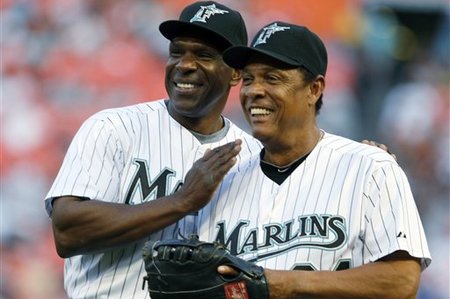 This is an issue that's cropped up before. Dawson's fellow Hall of Famer and former Montreal Expos' teammate Gary Carter, the only other Expo to wear the tri-color cap in the Hall, addressed the Nationals' unwillingness to acknowledge their French-Canadian roots in an article last year by New York Times' Tyler Kepner. Carter was quoted lamenting the fact that "the Expos’ history is not acknowledged at Nationals Park."

"'That’s really the sad part,' Carter said. 'At least recognize and embrace the fact that they were in Montreal for 36 years.'"

For his part, Dawson would love the recognition too. MLB.com's Bill Ladson talked to Dawson earlier this year and asked him how he would react if the Nationals did indeed honor him.

"'That would be a decision they would have to make,' Dawson said Wednesday. 'I really don't know how to answer that other than I would be honored and thrilled [if they did]. That would be up to them.'"

I talked to several writers who are currently covering the Nationals, and nearly everyone agrees that the franchise is not doing enough to commemorate the former Expos. Ladson, who covered the Expos from Nov. 1, 2002 until they played their last game in 2004, said one problem is that the issue is a "sore subject" with D.C. fans. However, he still believes the Nationals are doing Dawson wrong.

Andre Dawson should've been in the Hall a long time ago, before Gary Carter," Mr. Ladson says, "Dawson was a complete player, played in pain all the time, had a bad knee injury since he was a teenager," and in spite of the knee injuries, (first suffered playing football in high school in Florida, which required 12 operations over the course of his career), Dawson worked as hard as than anyone and was able to accomplish all of his Hall-of-Fame-worthy achievements on balky knees. Isn't that the sort of player you'd like to have as a part of your franchise's history?

Dave Nichols, who manages the web site Nationals News Network and was one of the first DC-based writers I met and befriended after the franchise left Montreal, agrees with Ladson.

"I understand the Nationals' desire to cultivate the ties to historical D.C. baseball, but there really should be some sort of recognition of the actual history of this franchise, and that history is in Montreal. I'm not suggesting a statue of Andre Dawson out in the centerfield plaza, but would a plaque or mural be out of the question? Surely the team could find a suitable place to honor those teams and players, other than mere footnotes in the history books."

Nichols makes a good point -- you can see pictures of non-Nationals Hall of Famers all around the stadium, but there's nary a sight of any former Expos.

Even Nationals fans with no connection to Montreal believe the team isn't doing enough. Will Yoder, who writes The Nats Blog, is part of a younger generation of Nats fans that grew up without a local team to root for. He was one of the area baseball fans petitioning for baseball's return to the nation's capital before it became a reality in 2005 and even had to deal with one person "verbally assaulting" him and his mom when he was 12 years old because he did not want a stadium to be built in Northern Virginia. So for Yoder, commemorating former Expos is more about recognizing the sacrifice Expos fans made so that Washington could finally see the return of the national pastime.

"As Washingtonian baseball fans, we need to remember how truly lucky we are. For years our city was without a baseball team to call our own. Many, like myself, grew up rooting for out of market teams just so we could have baseball in our lives. Then in 2005 we were given the gift of baseball from the MLB, and as recipients of any gift we should be both grateful and mindful. Grateful to the MLB for choosing our city, and mindful to the sacrifices made to make that happen. Montreal fans had their passion taken from them...the Nationals owe it to Expos fans, as well as the city of Montreal to recognize the history of their franchise." 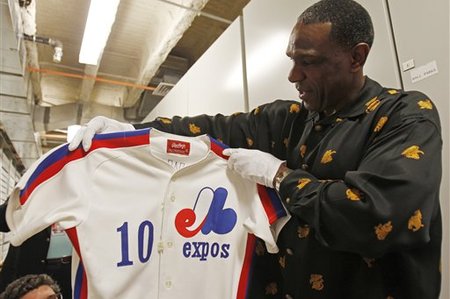 However, there are some that believe the Nationals do not actually have a duty to honor the Expos. MASN's Ben Goessling, who covered the Nats beat for the Washington Times before joining MASN, recently researched and wrote a children's book on the Montreal Expos' history. I asked Goessling if the time he spent examining the franchise's roots changed his opinion one way or the other on the issue.

"It didn't change my mind so much as it made me realize just how sad the history of the franchise is. This is a team that's been defined by missed opportunities - the Blue Monday game in 1981, the 1994 team, the 2003 squad that didn't get September call-ups, etc. - and though I wish the Nationals would give some nod to their Montreal roots, I can understand why they don't. It's not as though there's a World Series in their past to recognize."

Goessling also said he understands why the team hasn't yet gone out of their way to honor Dawson himself.

He's definitely a big part of that history. He was one of the best players on that 1981 team. But the Expos never put it together with him, and he left right about the time they were ready to make a run again. To go from the Expos to the Cubs and Red Sox, and then retire from the Marlins a year before they won a title...well, maybe Dawson understands the Expos' story a little too well."

Phil Wood, Goessling's colleague at MASN, has been one of the most eloquent voices of opposition to the idea of recognizing the Expos' past. Back in June, he noted that when franchises move and change their nicknames, they tend to do little to recognize their previous iterations. Ironically, he also noted that former Senators great Frank Howard's number 33 hasn't been worn by any player in D.C. since baseball's return, whereas both Dawson's No. 10 and Tim Raines' No. 30, which the Expos retired, have been handed out to Nationals' players. Wood also recounts a member of the Federal Baseball community calling in to the "Nationals Talk Live" postgame show to ask for his on whether or not the Expos' past should be a part of the Nationals' present:

"I replied as I have many times: I don't see much reason to do it. When the franchise moved to Washington in 2005 and left the name 'Expos' in Montreal, I think they left behind that legacy. Yes, the Expos had some outstanding players in their 1969-2004 history; but not many Washington-area baseball fans can really relate to that. Heck, the number of area fans who still relate to the Senators is dwindling, but they still far outnumber Expos' aficionados in the mid-Atlantic." 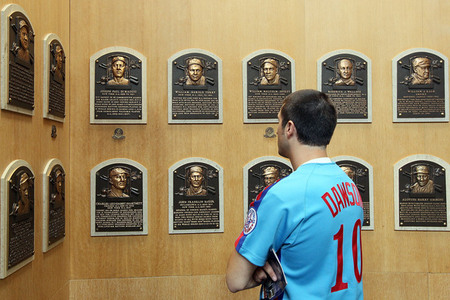 So that's where we're left, right where it's been since the franchise pulled up it's roots and relocated to the nation's capital. Andre Dawson will go into the Hall of Fame as potentially the last Montreal Expos player to receive the honor and wear the cap unless Tim Raines' support for election increases dramatically or Vladimir Guerrero's (or maybe even Larry Walker's) Montreal beginnings warrant their donning the tri-color cap upon induction. The history of the Expos' contribution to baseball's story will exist only in the Nats' record books, and eventually those marks will be surpassed. Then, the Expos' past will be relegated to only a couple plaques on the wall in Cooperstown.

Unless, of course, the Nationals choose to recognize their past ...