The conference known for basketball does play football too. Scott Jackson brings us an early look at how things might shape up in the ACC this year.

Share All sharing options for: ACC Football Still Looking for That Breakout Season

The ACC football kickoff does not have the sex appeal the SEC does, but at least they know how to pick a venue! I mean have you ever been to The Grandover Resort and Golf Club? This is a first-class place. Clearly the SEC, Big Ten (soon to be 12), Pac-10 (also soon to be 12) and Big 12 (soon to 10) cannot compete when it comes to media days.

OK, so there are no defending national champions here, and probably no 2010 BCS Championship contenders either. But despite the "it's a basketball conference" perception, make no mistake. The ACC is talent rich on the gridiron too:

For the sixth straight year, the Atlantic Coast Conference had over 30 of its players selected in the annual National Football league Draft which concluded Saturday afternoon, as 31 former ACC standouts were chosen by NFL teams.

Since 2005, the ACC and the Southeastern Conference are the only two leagues in the nation to have had 30 selections in the NFL Draft in each of the past six years.

None of the ACC Coaches are likely to call agents "pimps" and none have the star power OR national titles of Nick Saban, Urban Myer, Les Miles and  Steve Spurrier. There is no Bobby Bowden in the ACC anymore, which means despite the fine resumes of all the coaches, there are no longer any past national champions in the group. 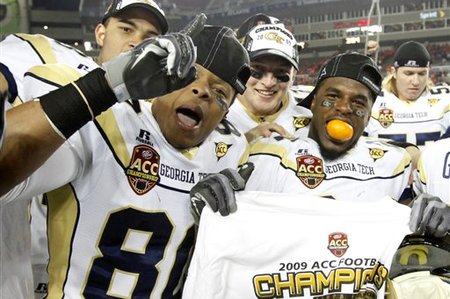 So what is the ACC selling? At media day, Commissioner John Swofford pointed to the "overall depth," "unpredictability," basketball and "excitement" of the league. Snarkiness aside, there is plenty of evidence the conference is cultivating talent that not only makes it to the next level, but excels, too:

For the second straight year, the Atlantic Coast Conference leads all conferences by a wide margin in the number of former football standouts selected from its current schools to play in the National Football League's Pro Bowl, which will be held this Sunday at Sun Life Stadium in Miami Gardens, Fla.

Current ACC schools saw 23 of their former standouts selected to play in this year's Pro Bowl. The Southeastern Conference was second with 15 selections, with the Big Ten third with 14. The Pac-10 had 13 selections followed by the Big 12 and the Big East with 11 honorees each.

The single biggest issue for the conference has been the BCS Bowl record (2-10) and the fact that Florida State and Miami have not been Florida State and Miami. The Hurricanes seem to be getting closer without the "issues" of the "U" days. As a matter of fact, the Hurricanes are achieving at a high rate off the field too. Duke and Miami were the ACC's only two football programs to earn Public Recognition Awards from the NCAA for their 2009-10 APR scores:

Miami had a 100 percent graduation rate for members of its freshman football class of 2002. It was the first time Miami had earned the award.

Jimmy Johnson and Dennis Erickson must be rolling over in their (metaphorical) graves. 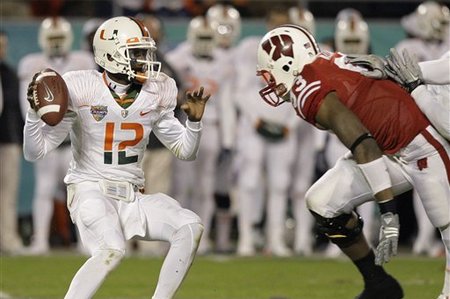 Before we crown them, we should mention the Hurricanes play on the Coastal side of the league, which appears to be a meat grinder. Miami could be ready to take the next step with QB Jacory Harris, but they will have plenty of competition. Yes, the Virginia Tech Hokies once again will be in the mix. This year they have a more experienced Tyrod Taylor under center and an amazing tandem of running backs with Ryan Williams and Darren Evans. The Hokies have been the league's bell cow for a while now and could get in the national title conversation if they can knock off Boise State at Fed Ex Field.

The rest of the Coastal Division is tough, too. Georgia Tech, under Paul Johnson, will once again frustrate teams with its triple-option offense. North Carolina should have a dominant defense (if no one is suspended), but will they get the QB play they need? After the Big Four in the Coastal, an improved Duke team under David Cutcliffe (everyone's favorite interview in the conference) will be no easy out. Cutcliffe is building something in Durham, and for the first time since Steve Spurrier, Duke football is no longer a joke. UVa will likely be the basement team in the Coastal this year, however Mike London is off to a great start with the Cavaliers (get them while you can).

The Seminoles, on the other hand, will probably be the choice in the weaker Atlantic Division. FSU is ultra-talented offensively, but they still need to figure out if their defense can hold up. They brought in Mark Stoops to run the defense, and many think he will be an upgrade over Mickey Andrews, who had more of an old-school approach. Boston College will be underappreciated as usual, but will likely be a contender. Clemson for now has Kyle Parker under center unless the Colorado Rockies give him a contract he cannot refuse. Maryland cannot be any worse than a year ago and have 12 returning starters and a favorable schedule. Wake Forest has to replace QB Riley Skinner but has 13 returning starters. N.C. State has one of the best QBs in the conference with Russell Wilson but will they be able to stop anyone and stay healthy for once under Tom O'Brien? 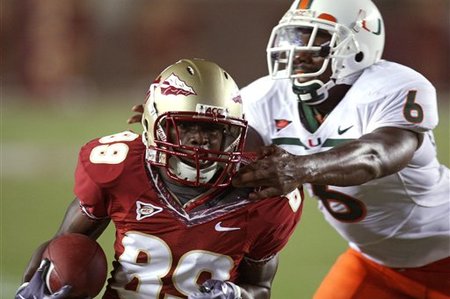 So who do I like to take the ACC?  Clearly Coach K has another National Championship Contender. For what it is worth I think the league will finally get the dream Miami-Florida State matchup in the championship game, which could be a complete debacle since the title game is in Charlotte, N.C., this year. Timing has not been a friend to ACC football since expansion.

I think the Hurricanes will beat Florida State in the title game, not because they are smarter, but because they sent their kicker/punter Matt Bosher to media days. They clearly feel they are capable of winning close games, which is where you need your kicker and punter.

(Just kidding, sort of. I do think it'll be Miami over Florida State though).