D.C. Talking Points: The Heat Is On For The Redskins, While The Nationals Cool Off

The Nationals' summer swoon continues, the Redskins prepare to start training camp and the Wizards and Capitals enjoy their time off.

Share All sharing options for: D.C. Talking Points: The Heat Is On For The Redskins, While The Nationals Cool Off

Welcome to Talking Points, where each week I will run down the stories that made the biggest splashes in the blogosphere last week and will tell you what to keep an eye on for the week to come. Last week was much like the week before, only even quieter. The D.C. sports scene in the offseason is pretty stagnant during the dog days of summer. With only the Nationals and D.C. United playing games, we are left to wait for training camps to open up as quick as possible. For the Redskins, that means this week. Hallelujah! Lets dive into the Talking Points.

The free fall continues, but manager Jim Riggleman's job is safe ... for now. The team was swept last week by the Milwaukee Brewers but they did manage to split a series against the Reds with some clutch pitching by Stephen Strasburg and Livan Hernandez.

Strasburg was, again, dominant, while Livan was typical Livan. I would watch Livan on Top Chef if he was cooking like he was during the Brewers game. That guy is made of pure magic. Those two pitchers are the only two bright points in a starting rotation that is living up to its potential as being quite average to below average. Bring on the cavalry?

The Nationals now sit at 42-57, which is good for dead last in the NL East and fourth worst in the National League. Remember those days earlier in the year when people were talking about a possible wild-card spot? Yeah, they aren't talking so much now.

Adam Dunn trade rumors still persist, but Mike Rizzo is apparently asking quite a lot for Dunn since he thinks he's statistically on par with Ryan Howard. Guess what? He's right. You wouldn't trade Howard for a bag of peanuts, the Nationals shouldn't do the same for Dunn. If you don't get "fair" value for the slugger, sign him for another couple seasons more. Having a 40-HR hitter can't hurt a lineup.

As an indication of the talent level of the rest of the team, few other players have even been rumored in a trade scenario. Food for thought there.

Two words: Training Camp. Three more words. Starts THIS WEEK. Can you feel the excitement? I, for one, can. Let the speculation begin! Will the line hold up through training camp, let alone the season? Is this Clinton Portis' last year as the No. 1 back in D.C.? Will any of the receivers play up to their potential? Can Donovan McNabb stay upright long enough to make a difference on the team? Will the defense be the steadying force it has been despite the shift to a 3-4 front?

I eagerly await these answers. Let the fun begin!

With Summer League over, the Wizards are in full off-season mode. Not much interesting news coming from fun street for these guys, except for JaVale McGee trying to lead the league in capital letters in his name and trying to get on the U.S. Men's National basketball team. Good luck JaVale!

As quiet as the Wizards are, the Caps are even quieter as they continue to enjoy their offseason.
Other Tidbits:

Frankly, I'm surprised I've gotten this much news out of our teams. You now want more? So demanding.

Truly an underrated Rob Base song. "It Takes Two" always gets so much play, but this song is pure hip hop goodness. 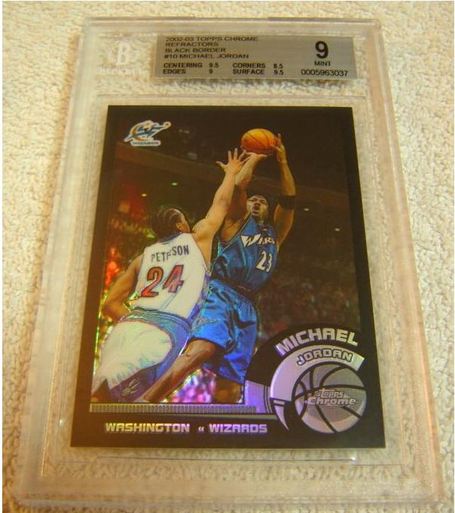 Little did you know that there was something valuable leftover from Michael Jordan's ill-fated comeback with the Washington Wizards. This card is it. For the low low price of $1,125.00, this card could be yours. Shipping is even tossed in for free. What a bargain huh? From the description, apparently only 11 of these cards exist with only three others being in as good or better condition.

This still doesn't make up for the sheer amount of suck that is embossed on it though, does it? You would have to be either a completionist or a hoarder to want to own this card and to pay "full value" for it. Anyone else would want to be paid that money just to see MJ sporting the Wizards blues. If you are that special collector/hoarder though, then by all means, buy this card right away! SUCKERS!

No final thoughts this week, its too freakin hot to think. If you want to email me about whatever is on your mind, shoot it my way at bjpsbnationdc AT gmail DOT com.