What If Vinny Cerrato Never Left The Redskins?

After two painful seasons, there is finally cause for cautious optimism with the Washington Redskins thanks to the addition of general manager Bruce Allen and head coach Mike Shanahan. But what would things be like if Vinny Cerrato never left?

Share All sharing options for: What If Vinny Cerrato Never Left The Redskins?

True story: this past weekend I was forced to face one of my biggest fears in life as I boarded a flight from Chicago back to Washington, D.C.

No, it had nothing to do with a fear of flying or claustrophobia. It was much, much worse.

It was Vinny Cerrato.

I kid you not. The biggest villain in local sports (or, technically, the former Redskins' executive vice president of football operations. Sometimes I get those two confused) was standing just a few feet away from me as we began boarding the plane. Two things immediately stood out.

First, he was sitting at least a dozen or so rows behind me. In coach. Yeah, the guy who used to live and die to fuel up Redskins One for owner Daniel Snyder as the two flew cross country in pursuit of the most expensive free agents money can buy was now slumming it with the common folks. (I’d say something about how the mighty have fallen, but nothing on his resume suggests he was ever all that mighty.) Second, he was wearing a Yankees hat – ensuring that, to this day, no one likes him. You got to give him that: the man is nothing, if not consistent.

While I passed up the chance to say anything to the mastermind of the "Decade of Disappointment," simply crossing paths with Cerrato ensured I would be unable to sleep during the two-hour flight back home. Instead, my mind began to race about just how different things would have been this offseason had Vinny remained employed by my favorite football team.

Needless to say, heavy alcohol consumption and a near panic attack ensued. 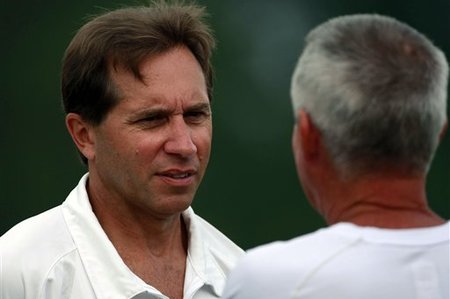 Maybe you’ve never really asked yourself how bad things would be today if Bruce Allen hadn’t come to town and turned the Redskins into a respectable franchise once again. Let me welcome you to my nightmare.

For starters, there’s zero chance Mike Shanahan would be the head coach. Like Marty Schottenheimer before him, Shanahan is much too smart to let his fate rest in the hands of Cerrato. He’d have thanked the Redskins for their interest and then ended up in Dallas.

As if that thought isn’t enough of a stomach punch, remember this: without Shanahan there would also be no Jim Haslett or Kyle Shanahan. If you’re like me, you’re already giddy at the thought of an aggressive-minded defensive coordinator who actually tries to pressure opposing teams or an offensive genius who is so skilled at his craft that he turned the bumbling Houston Texans into the top offense in football. But if Cerrato’s still here, you can go ahead and say goodbye to both of them. In fact, chances are the Redskins would have lost any chance at a top-tier head coach and would have had to settle for someone like two-time NFL failure/college-level cheater Pete Carroll or an in-house candidate like Jerry Gray.

You remember Gray, right? He was the Redskins’ former defensive backs coach who secretly interviewed for the head coach vacancy while Jim Zorn was still in the position. Doesn’t he just sound like someone you’d love to be the face of your franchise? If Cerrato was still on board, that’s probably who’d be calling the shots.

And the Redskins definitely wouldn’t have been savvy enough to pull off a trade for Donovan McNabb. Nope. Vinny wouldn’t have even thought to quietly pick up the phone and gauge the situation. If anything, the ‘Skins would have been the first team mentioned in trade talks because the burgundy and gold were never capable of keeping secrets during the Cerrato era.

Once word leaked that the Redskins were interested, Philly fans would have revolted at the notion of trading McNabb within the division and the Eagles front office would have shipped Donovan to Oakland to avoid any further backlash. 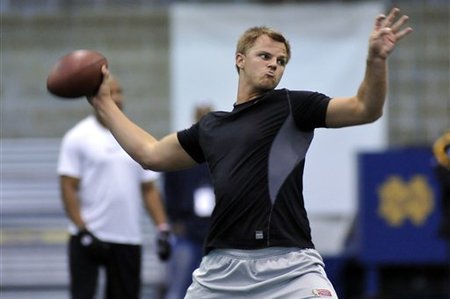 And let’s not forget that if Cerrato was still here the entire NFL draft would have gone differently. I was told last season by someone I trust at Redskins Park that had Vinny remained, the team would have used their top two draft picks on a quarterback and a running back.

Since Sam Bradford went number one overall to St. Louis, that means Cerrato would have used a top-five pick in the draft on Notre Dame’s Jimmy Clausen. Sure, he didn’t go until the 48th pick in the draft, when Carolina mercifully used a second rounder on him, but the Notre Dame connection alone would have been good enough for Cerrato to justify the move.

So Clausen would be here and I’m betting Cerrato would have franchised Jason Campbell just to keep him miserable for another year. The two signal callers would have been the main focus of the offseason and article after article would have asked which quarterback would win the starting job.

And yes, that would have been the main attraction this offseason, because Albert Haynesworth wouldn’t have skipped the entire offseason. With Vinny around, "Fat Albert" would still get special treatment and be free to do whatever he sees fit. Plus, the team would still be running a 4-3 defense, so Haynesworth wouldn’t have had to cut off his left leg to drop 32 pounds this summer.

Clinton Portis was so disgruntled after last season that he nearly demanded a trade. He’s been pacified because Shanahan came to town and he’s anxious to rekindle the magic that led to the two most productive seasons of his career. Without Shanahan though, Portis would have held firm on his desire to seek employment elsewhere, so count him out of the equation.

The Redskins would have eventually traded him away (probably for a lowly fifth-round pick or something) and used that draft pick on another flashy receiver. And how’s this for irony – my guess is the ‘Skins would still have signed Larry Johnson and Willie Parker. But with Cerrato in the mix, they both would have signed five-year, $25 million deals.

And it’s safe to assume that Joey Galloway, Bobby Wade and Phillip Buchanon would have received similarly lucrative deals as well, so the salary cap situation would still be a train wreck. But on the "bright side," Cerrato would have stayed true to form and used the second rounder on a young running back, as advertised.

Welcome to the LeGarrette Blount era. You might have seen a red flag when he decked a white boy for talking trash. Cerrato saw mental toughness and, in his mind, that’s what his team needed more of. Dammit, that was a playoff team and if Zorn was better at his job and the Redskins had a few more skill players with mental toughness, they would have been a 10-win team. Done and done.

Here’s the kicker – because Cerrato doesn’t value protecting his quarterback, none of the offensive line upgrades would have taken place. Artis Hicks. Jammal Brown. Trent Williams. Selvish Capers. They’d all be elsewhere. When "Big" Mike Williams discovered he’d miss the 2010 season because of blood clots near his heart, the ‘Skins would be forced to trot out the likes of Chad Rinehart, Stephon Heyer and Will Montgomery as starters. The mere thought of that just made me throw up in my mouth a little bit. 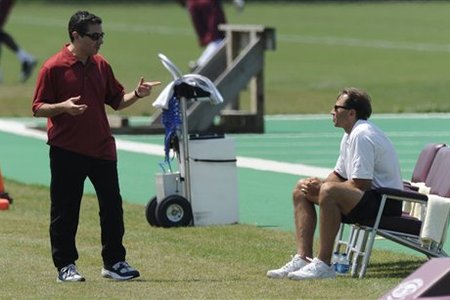 So yeah, those are the horrid thoughts that raced through my head as I return home from a weekend getaway. Some airlines talk about flying the friendly skies, but this trip was now anything but.

About the only positive I could rationally come up with had Cerrato remained in town was we’d stilled be highly entertained once a week by radio-host Vinny. When that’s the light at the end of the tunnel, you know you’re in a dark place.

With that in mind, I just might walk onto the field on the first day of training camp and wrap my arms around Allen and/or Shanahan. Sure, they might not understand why a grown man felt compelled to embrace a complete stranger in front of the entire football team and thousands of fans, but it’s the least I can do to thank them for preventing my own personal hell.