Tired of trying to decipher all the jock-speak that goes on at Redskins Park? Here's a quick guide to translate your way through what everyone will be saying as they try to avoid the elephant in the room who doesn't want to play nose tackle.

Share All sharing options for: The Redskins' Training Camp Translator

Training camp is always a unique spectacle. Think about it. Fans and media outlets from all over the D.C. area converge on Redskins Park for the opportunity to watch men sweat and grunt for a few hours and be rewarded with a signed Malcolm Kelly card, which hopefully will sell for enough money on eBay to cover the costs for the gas spent driving out to Ashburn and the money spent staying hydrated while watching the burgundy and gold practice in sweltering heat.

But this year, training camp will be unlike anything we've ever seen at Redskins Park. Thanks to the unsettled issues between Albert Haynesworth and the Redskins, training camp is now center stage for a bizarre media circus that won't go away quietly. In the coming days, everyone attached to the Redskins organization will be asked to comment on the situation at camp while every move Albert makes and every word he says is analyzed and scrutinized.

Problem is, there won't be much said in Ashburn in the coming months. Those pot shots you saw the Redskins fire at Albert back in mid-June? Not gonna happen this time around. Whether Albert's teammates like it or not, he's going to be there, and unless they want to sacrifice the high ground they have developed by showing up to camp, working out and learning new schemes, they won't openly spout off about someone who, for better or worse, is still their teammate.

Though the Redskins won't be as candid about the situation as they have been in recent weeks, you can still get to the bottom of what's being said. As long as you keep this handy translation guide with you at all times, you won't have any problems figuring out what's really going on at Redskins Park in the next few weeks. 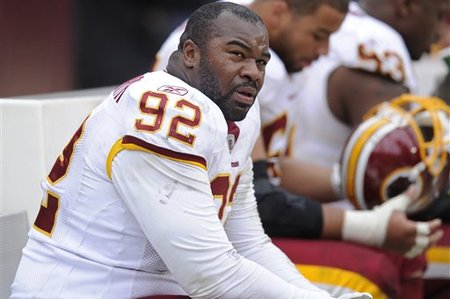 "I won't be a distraction."
Translation: My problems ain't none of your business.

"I'm going to honor my contract."
Translation: No one came to my pool party, and attendance was totally voluntary. You don't see me raising a ruckus, do you?

"I'm here to work"
Translation: I wouldn't be able to listen to "Working Class Hero" by John Lennon with a clear conscience if I wasn't here at training camp with my fellow proles.

"I'm looking forward to getting on the field and playing football."
Translation: The start of training camp means it's only five short months until the off-season starts again.

"I lost 30 pounds this off-season because I'm serious about helping this team."
Translation: The oil spill cut into my seafood intake this summer. A man can't keep his figure without heaping helpings of lobster.

"I'm ready to move forward"
Translation: Do we really have to bring up the stuff with Alex Gurdoe again? That was a long, long time ago.

Oh, you wanted to know about my trade request? Ask me again tomorrow.

"I just want to play football."
Translation: For every question you ask me about the off-season, that's one less piece of food you'll find at the media buffet table after practice. 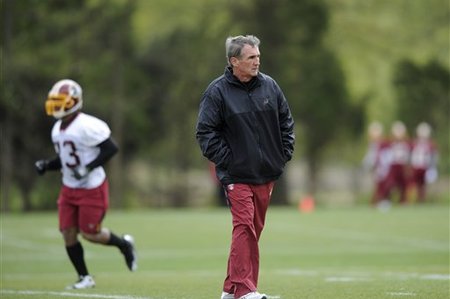 Quotes from the coaching staff

"We're excited to see Albert at training camp."
Translation: 330 pounds of unmotivated flesh is still harder to move around than an empty roster spot.

"Albert has passed his conditioning test."
Translation: We had our lawyers go through every word of Albert's contract and we couldn't find any loopholes yet, so we have to play him.

"Albert will be behind everyone else because of the time he missed."
Translation: Have you ever seen a cornerback wear no. 92? You will.

"It’s easy to talk. We will see in practice."
Translation: The Washington Redskins are not a debate team.

"Albert has been working hard today."
Translation: He must have really liked the meat basket we left at his locker.

"We're ready to move forward."
Translation: Finally, we can carry out all those pranks we came up with while Albert was gone. We can't wait to see the look on his face after we replace his bacon with Beggin' Strips. 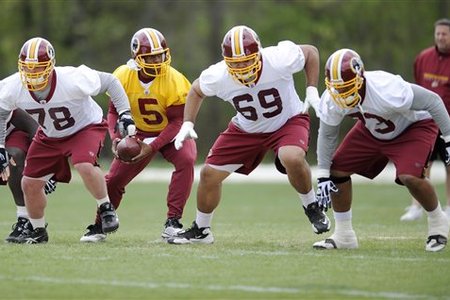 "Albert is still our teammate."
Translation: We went through having Vinny Cerrato as our GM and Jim Zorn as our head coach. Compared to that, this is a cake walk.

"Once Albert learns more about the 3-4, he'll see this is an exciting system to play in."
Translation: Jim Haslett takes us to the Cheesecake Factory every Thursday after practice, which is big upgrade from Greg Blache's Saturday Scream-Off.

"If Albert comes ready to play, we'll accept him."
Translation: If he doesn't buy everyone donuts to show us that he's sorry, heads are going to ROLL.

"He's going to have to earn our respect."
Translation: You have less respect in your locker room right now than Dez Bryant.