Nationals fans assumed that the second half of the season would be better than the first because of all the additional arms being added to the rotation. But the team's hot start, among other things, are giving a different shape to the season.

Share All sharing options for: The Nationals' Second-Half Pitching Cavalry

Nats fans have gotten used to a certain shape to the season thanks to the way the last few seasons have gone. Each of those last few years, the team has played dead for the first two or three months before getting hot (well, if playing .500ish is hot) for the last two months or so.

That finishing kick gives the few people left a little bit of hope that the next season's going to be the one where they finally take the leap. And, well, it hasn't happened yet.

This season was a bit different. The team started out hot, so much so, that reasonable people were contemplating what the team would need to add to make a run for the Wild Card. At the time, the answer seemed like Roy Oswalt. Now, thanks to hindsight, I'm not sure that adding everything valuable on the Astros would help.

The team's played relatively poorly for a few months now, and fans are kind of hoping for that second-half kick. And what's fueled that hope was the prospect of the pitchers on the horizon. 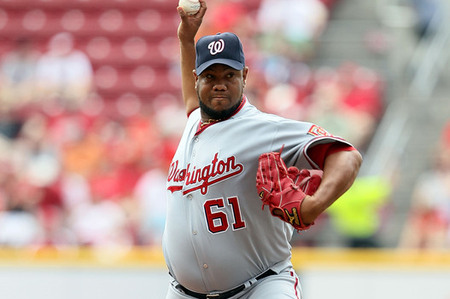 Everyone assumed that this year would follow that same pattern. Livan Hernandez, for example, was signed to just be a placeholder -- someone to eat 120 or so innings in the first few months, and who could be cast aside once Jordan Zimmermann was healthy.

Well, as we've seen, Livan's not getting cast aside any time soon.

The team's rotation was built with a second-half surge in mind. Come September, it was supposed to be Stephen Strasburg, Zimmermann, Chien-Ming Wang, Jason Marquis and Ross Detwiler.

Well, now, how many of them can we count on?

Strasburg's likely to be shut down soon. Detwiler pitched ineffectively after the team rushed him back from injury rehab to make an emergency start. (And truthfully, it's not like he was great before). Zimmermann's on his way back, and will probably be up in a few weeks.

The same goes for Marquis. He's a bit of an interesting case in that he was signed not because he's a great pitcher, but because the team thought they could pencil him in for 180 innings -- 180 innings they wouldn't have to give to Luis Atilano or one of their other mediocre 5th starter types. As it turned out, he wasn't healthy, pitched terribly, and will finally be coming back to the majors this week. Will he be healthy enough to give some stability to the back half of the rotation? Can the Nats count on him to fill that Livan-like role: the guy who gives them six innings each start, without getting completely bombed? 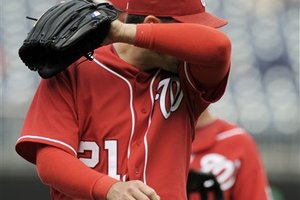 And what about Wang? When the team signed him, they trumpeted the fact that they controlled him for a few years thanks to his relatively low service time. But what does it matter if he's never on the mound? His expected time of arrival consistently gets pushed back further and further into the future.

So the question is, can they really count on him? Wang is a lot like John Lannan. Both keep the ball on the ground. Neither strikes anyone out. They walk the fine line of where the so-so quality of their stuff meets good command, keeping hitters off balance with junk. But as we saw with Lannan this year, if they're not quite healthy and they lost a tiny bit of stuff, they're going to get murdered.

Is it reasonable to expect Wang, who's strength was his ability to kill worms with his sinker, to come back all the way considering how long this rehab was, and the difficulty of shoulder surgery? The team was envisioning a number two starter. Should they? 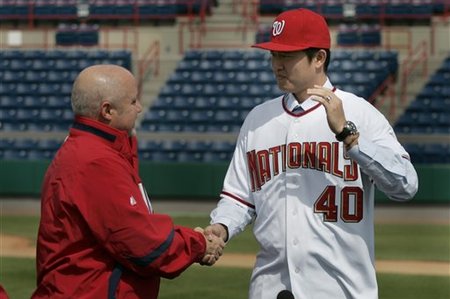 We've heard that the team's loaded with pitching. Well, in that they have arms that can throw the ball to the plate, it's a true statement. Nobody said that they're loaded with effective pitching.

More or less, what you see now is what we've got. And if you subtract Livan's terrific season -- ‘cause seriously, you don't think he's gonna do that again next year, do you? -- there's not necessarily a lot there. And if Strasburg's hurt, that's doubly so.