Mike Shanahan said Albert Haynesworth failed a "basic conditioning test" that all other linemen "passed" during OTAs. But that's a bit misleading, which tells you everything you need to know about the Shanahan-Haynesworth war of wills.

ASHBURN, V.A. - One of my favorite moments of my first-ever experience covering Redskins training camp happened well after practice was over. Media members were frivolously typing away and the sound of keyboard filled the air. In waked two Redskins public relations officials in order to try to clear up what coach Mike Shanahan meant when he said that Albert Haynesworth failed a condition test.

Ten minutes later, they walked out. Yup, ten minutes later. It might have been more, to be honest. That's because it took them a pretty long time to "explain" the "truth" behind the conditioning exercise Haynesworth was forced to take early this morning. That truth? It wasn't really a "test" after all.

OK, maybe it was, in a way. But the more accurate way to put it was that it was a drill turned into a test as a way of Shanahan sending a message to Haynesworth. That may go without saying to many, but after listening to Shanahan try to pass the "test" off as some sort of standard thing all linemen went through, I felt like it was necessary to make this clarification.

"It's a basic conditioning test," Shanahan said after declining to discuss specifics. "We get a good idea if a guy is in shape. We put a lot of our linemen through it, offense and defense. We do it through our conditioning drills throughout the OTAs. It's a very fair test." 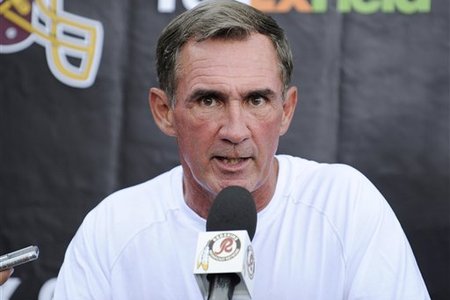 Shanahan is right that the team puts their linemen through the drill-turned-into-test often. The Redskins confirmed that everyone went through similar drills at different points during the OTA period. But when asked about whether the test was "pretty tough" for a big guy like Haynesworth, Shanahan said simply that every other lineman passed the test.

Problem is, that's a bit misleading. It's not that every other lineman specifically went up there, got timed and did it in under a certain amount of time; it's that every other lineman passed out of taking the test in the first place. By participating in "a certain percentage" of the teams' OTA sessions, in Shanahan's words, they were exempt from having to go through with the test on the first day of camp. Nobody else took the test, which means, conceivably, that the "certain percentage" Shanahan references could have been "anything above zero."

That's probably why several players were legitimately puzzled when posed with the idea of having to pass a "test." Andre Carter and Kendrick Golston said they weren't required to pass any test of any sort during OTAs, for example. In addition, as Joseph White of the AP notes, three players failed a similar test two years ago and were still allowed to participate in practices.

DeAngelo Hall went a step further when he was asked about it: 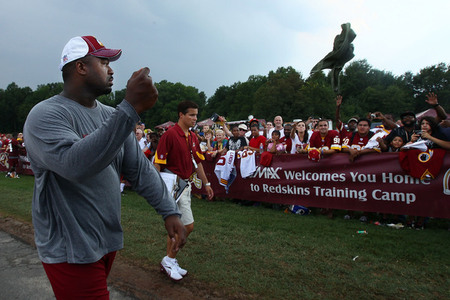 That last line is why I'm even making this distinction. Look, by all accounts, this was a passable "test." I don't believe, as Pro Football Talk does, that Shanahan set this up just to fail Haynesworth. Haynesworth probably could have passed it. I do, however, believe Shanahan set this up just to separate Haynesworth from the group further, and is now trying to back off that in his post-practice remarks. Shanahan seems to want you to believe that Haynesworth needs to get his conditioning back and that he's way more out of shape than anyone else on the roster. I suppose that may be somewhat true.

But it's also not the full truth, because that explanation as face value is somewhat absurd. The practice Haynesworth supposedly wasn't in good enough condition to attend was a light 70-minute workout that Donovan McNabb admitted wasn't particularly intense. Shanahan himself cut the practice short by 10 minutes, and the team only did 11-on-11 drills at the very end. Malcolm Kelly, who had a hamstring problem and was supposed to sit out, participated. Haynesworth may not be in perfect shape, but surely, he was enough in shape for that.

"[The test]" keeps a guy from getting hurt," Shanahan said. "I don't want to put a guy out there and have him get hurt, and suddenly there's a setback for two weeks. It just doesn't make sense."

That's a good one, Mike. Maybe you should test Kelly then. You know, to keep his hamstrings from getting hurt. 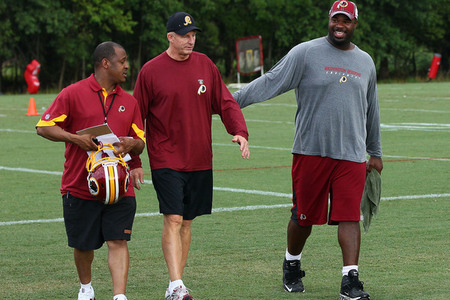 So really, this should not be spun in such a way where it's only to help Haynesworth get in proper condition. In reality, Shanahan was asserting himself and making a point to Haynesworth. Albert, you want to train away from the club as the rest of your teammates bust their balls for the season together? Fine. You just have to take some made-up drill-turned-into-a-test before you can get back in everyone's good graces.

For the record, I think that's a completely appropriate stance to take. Haynesworth singled himself out by not coming to OTAs, so Shanahan is showing him the consequences of those actions. Is it a bit vindictive? Probably. Is it productive? I'm not sure. But it certainly is appropriate after what Haynesworth pulled this winter.

Either way, don't let Shanahan talk you into thinking he's trying to treat Haynesworth like every other player. In reality, he's doing the exact opposite.