The Redskins Are More Than A Football Team. They're Also A Paint Scheme

Share All sharing options for: The Redskins Are More Than A Football Team. They're Also A Paint Scheme

If you've ever worried that your current choice of ride doesn't adequately show your allegiance to your favorite NFL franchise, the answer to your prayers is now available on eBay. 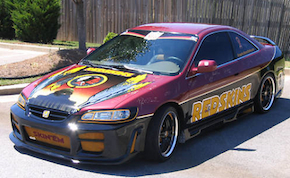 I think its somewhat fitting that the car representing the Redskins is a Honda Accord with what appears to be 15-inch rims. More pictures after the jump. 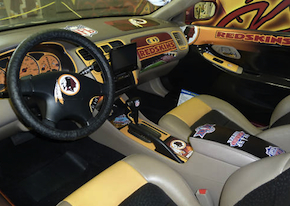 It doesn't scream luxury, but there sure a lot of things to look at, and that has to count for something. You should probably be paying attention to the road, but a DVD player in the dashboard is still pretty bad ass. 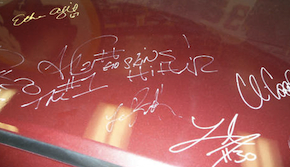 The car was autographed by the 2006 and 2008 teams. The owner has been able to identify over 50 autographs including some players you may not remember were ever here (Jason Taylor) as well as some you might still be trying to forget (Adam Archuleta). 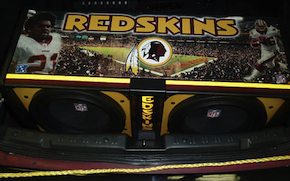 And of course you got to have that bump, even the trunk of this car is representing.

The current bid is $2,000, but the reserve has not been met, so we don't know what the final price will be. No matter what the final figure is, though, it will be worth it. This is truly a bargain at any price.