This week marked the official beginning of the season for the Washington Kastles, the World Team Tennis club that includes tennis stars Venus and Serena Williams (the former coming in a trade with Philadelphia ... wait they have trades in this league?). Last year, the Kastles won the WTT championship and ignited a D.C. sports renaissance, if you believe them at least.

To celebrate, the Williams sisters are in town tonight for the team's match against the New York Buzz (clever!), featuring former legend Martina Hingis. It will be Venus' lone home match of the year, and it'll happen at Kastles Stadium between 11th and H Streets NW. Venus and Hingis, together again, ey?

The match is sold out, but to party like it's 1997, check it out on Comcast Sportsnet tonight at 7.

But enough of that. You want to know the Kastles slogan, right? Thanks to Dan Steinberg, here it is. 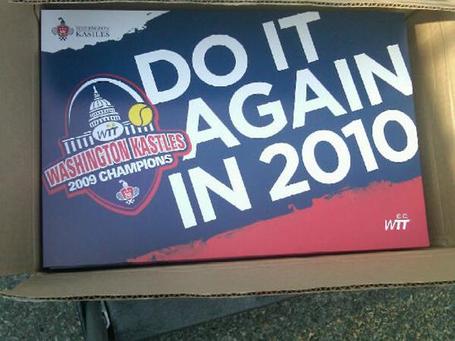 Steinberg has also already stolen the obvious "that's what she said" pun. Damn you, Dan!