Past Perspectives: The Good And Bad Of Having Multiple Top 10 Picks

In the last 20 years, there have been several occasions where Washington has had more than one top-10 pick. This year, with the District taking three players (Bryce Harper, John Wall and Trent Williams) with top-10 picks in their respective drafts, we take a look back at some other years where D.C. was blessed, or cursed, by its draft pick bounty.

Share All sharing options for: Past Perspectives: The Good And Bad Of Having Multiple Top 10 Picks

The last 20 years have been more bust than boom for Washington sports. Though there have been some lean years in the last two decades, that also means there have been opportunities to get stronger through the draft.

The best opportunities to change a franchise come when you have a top-10 selection. That's where you find the players who can be franchise cornerstones and drastically change the direction and fortune of the franchise. Certainly, franchise players can be taken later in the draft, but more times than not, if you're looking for a true superstar, you better look in those first 10 picks.

That's what makes 2010 so special for D.C. sports. This year, Washington has been fortunate enough to draft three players with top-10 picks since April. No draft pick is ever a guarantee, but having three picks in that range increases the chances that at least one player from that trifecta will be able to lift their franchise out of the muck and mire they've been stuck in recently.

With that in mind, we take a look back at some other years in recent memory where Washington has had more than one top-10 pick. As you'll see, there have been some good years, and some years that explain why Washington hasn't won a title since 1991. 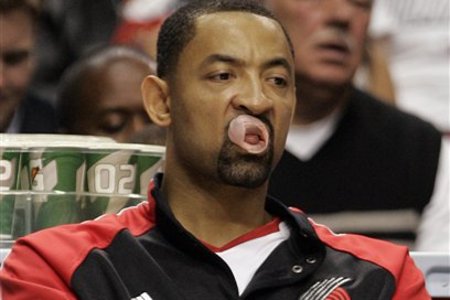 Heath Shuler's presence alone is enough to drag down any grouping, but his fellow draft mates do him no favors. Nolan Baumgartner only played 18 games with the Capitals during his four seasons with the franchise, tallying exactly one point during his time as a Capital. He spent most of his time with the franchise with the Washington's AHL affiliate before being traded to Chicago in 2000. Three picks later, the Vancouver Canucks selected Mattias Ohlund, who went on to play in the 1999 All-Star Game.

Juwan Howard was named to the All-Rookie team, but only after a contract holdout that caused him to miss the first seven games of the season. Then, after making it to the All-Star Game in his sophomore season, he never regained his form, and his $105 million contract crippled the team for years. He played hard and meant well, but he left most Wizards fans with a bitter taste in their mouths. Yet oddly enough, Baumgartner and Howard were still playing in the majors at the end of the 2010 season. Go figure.

If you're wondering why the latter half of the 1990s was so dysfunctional in D.C., you have your answer. Even though Rasheed Wallace was traded at the end of his rookie season, his departure led to the arrival of Rod Strickland, who knew how to cause a few headaches himself. 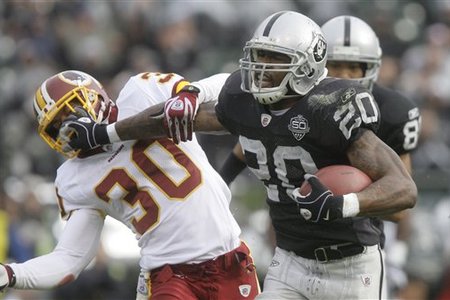 Both of these defenders are entering seasons that will define their careers in Washington. Landry has to become a weapon in Jim Haslett's 3-4 defense in order to stick around after three up-and-down seasons in Washington. After three seasons of development, mostly in Hershey, Alzner has to give the Capitals more defense to help the Capitals make a run for the Cup next season.

After three seasons with the Redskins, where Howard was never able to escape the shadow of the Heisman Trophy he won while at Michigan, the Redskins decided his production didn't match his salary and left him available to be taken in the expansion draft, where the Jaguars gobbled him up. After a year in Jacksonville, Howard enjoyed a career year with the Packers in 1996. He returned three punts for touchdowns during the regular season, was named to the Pro Bowl and won Super Bowl MVP after returning a kickoff for a touchdown in Super Bowl XXXI. His star faded rather quickly after his 15 minutes of fame at the Super Bowl, but that 15 minutes was still 15 more than Terry Allen-led Redskins got that season.

Gugliotta spent a little over one season in Washington before being included in the Chris Webber trade. Though he never came close to being on par with Webber, he still did well for himself, making the All-Star Game in 1997 while with the Timberwolves.

Though it's hard to say Howard or Gugliotta were busts, neither one had much of an impact, positive or negative, in Washington.

Several of the combos we've taken a look at have shared similarities in their careers, but Hamilton and Beech share the most similarities of anyone on the board. Consider the following:

Sure, Beech doesn't wear a headband and Hamilton isn't playing in Sweden now, but they have certainly shared some similar experiences as professionals. 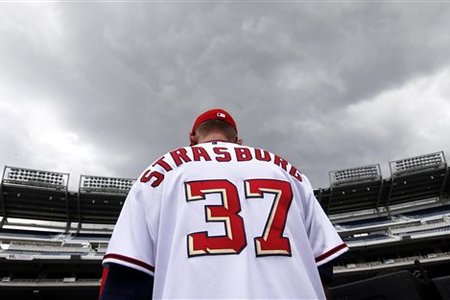 Strasburg and Storen represent the only time in D.C. sports history where a Washington team has held two top-10 picks in the same season. Though it's early, both seem to be doing the job well so far. Making to the big leagues in your first season is no easy task, and both have fared well so far. Barring any unexpected elbow tightness, it looks like the Nationals have an ace and a closer to build around for years to come.

Two picks, two hits for D.C. in 2005. Ryan Zimmerman probably won't be the best player on a World Series winning team, but he's given the team just about everything you could ask for from a player: Clutch hitting, stellar defensive play and a pristine off-the-field record. Works for me.

Carlos Rogers may not mean quite as much to the Redskins as Zimmerman has meant to the Nationals, but he has been a fairly solid starter in his five seasons with the Redskins. You could say he's underperformed for someone who was taken with the ninth overall pick, but considering who went No. 1, I don't think there's much room to complain about a five-year starter who can help against the run and the pass.

Until 1992, Picard and Ballard was the only top-10 draft pairing Washington ever produced. The 80s were good years for the Redskins and Capitals, while the 70s were solid for the Redskins and Bullets. It was a difficult time for Washington to accumulate high draft picks because of all the success teams were having, but 1977 was the exception.

The Capitals were still growing into a NHL-caliber franchise in 1977, when they drafted Picard with the third pick in the NHL Draft. The Bullets, on the other hand, were a contender on the verge of a title. They were able to get the fourth pick in the draft after a trading Truck Robinson and a first round pick to Atlanta. With the newly acquired pick, the Bullets picked Greg Ballard. Both Picard and Ballard contributed to the future success of the team, but in different ways.

Picard gave the Capitals a player to build around as the Capitals began to become a contender for the first time. He helped the Caps improve from 48 points in his first season to 67 in his third season with Washington, in which he was an All-Star. He would then be traded to Toronto, where he spent most of the rest of his career, but his play set the gears in motion for the Capitals' string of success in the mid-to-late 80s.

Ballard fit in seamlessly with the Bullets in his rookie season as he helped the Bullets win the title in 1978. He was never an All-Star like Picard, but he did the little things to help Washington win a title, and stay in the playoff hunt after Wes Unseld and Elvin Hayes left Washington.

2004 – Alexander Ovechkin, Sean Taylor and Devin Harris (who was traded to Dallas for Antawn Jamison)

Until John Wall, Bryce Harper and Trent Williams can prove otherwise, this is the group against which all of Washington's top-10 draft classes will be judged. These three draft picks contributed to nine playoff appearances and counting. Ovechkin has led the Capitals to the playoffs three times and Taylor spurred the Redskins on two late-season runs that resulted in playoff appearances (one posthumously). And let's not forget Washington's trade to send Devin Harris to the Mavericks in exchange for Antawn Jamison was the move that sparked the Wizards' stretch of four consecutive playoff appearances.
Despite their success, there are still question marks surrounding each player. Ovechkin still needs to get the Caps to a Stanley Cup, Jamison never gave the Wizards the interior defensive presence they needed to be more than a one-and-done playoff team and we'll never know what Sean Taylor could have meant to the Redskins if he hadn't died at such a young age. Flaws and all, this is still a good group. When you can get one-franchise changer, a two-time All-Star and a two-time Pro Bowler out of three top-10 picks, that's a great haul.
Though we should avoid getting too far ahead of ourselves, it's impossible to ignore that this year's draft class has the potential to be a special group. John Wall and Bryce Harper have the opportunity to be major stars in their respective leagues and Trent Williams could be Redskins' solution at left tackle for the next decade. The draft class of 2010 has the opportunity to be even better than three players Washington received in 2004. Then again, Heath Shuler, Juwan Howard and Nolan Baumgartner had that opportunity too.