The Best-Laid Plans Of Nats And Men

A few years into the Lerner family's and Stan Kasten's "Plan!", the Nats should be in pretty good shape, right? Well, not exactly.

Share All sharing options for: The Best-Laid Plans Of Nats And Men

When the Lerner family took over control of the Nationals in 2006, most of their public statements focused on the need for strong player development. Co-owner and team president Stan Kasten was particularly vocal on this, citing his experience in Atlanta as evidence that a player-creating farm system is the key to building a dynasty.

"The PLAN!" as it came to be known (and truthfully, mocked) was and is absolutely the right way to win. If you put elite talent evaluators in place, give them all the resources they need, and focus on hoarding as much young talent as you can, it will lead to wins.

But, as with all things in life, it's that execution that matters. And a few years into the Lerner family's "PLAN!", things aren't nearly as rosy as we thought they would be by this point. 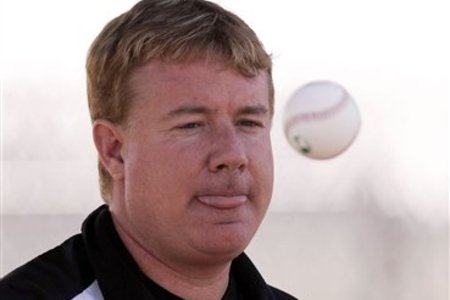 And for that, let's start with the first component of the plan from above: putting elite talent evaluators in place. How many adjectives would you have to run through in your mind before you ever associated "elite" with former general manager Jim Bowden? It was long thought that Bowden and Kasten couldn't possibly coexist. One's a professional. One's a buffoon. But for whatever reason, Bowden stuck around. And around. And around.

Bowden -- for whatever his strengths -- never has been the kind of guy who knew how to assemble a coherent roster. He was constantly flying by the seat of his leather pants, and asking him to work within the context of a multi-year, multi-part "PLAN!" was just asking for failure. It'd be like putting a 13-year old Halo addict in charge of one of those multi-national NORAD defense drills.

The second component of a successful plan requires the front office to have all the resources it needs. Call that one a failure, too. The team was woefully understaffed in the scouting department, despite some previous loud protestations that they were doing things right. This winter, the Nats hired a bunch of new scouts and front-office personnel, after having told fans they had built a first-rate front office three seasons ago.  From that Post story:

"In previous seasons, the Nationals required even their lead scouts to cover both the amateur and pro levels. Manpower was so scarce, it left the team with a flimsy database of scouting material on the other major league clubs."

So consider that interim period a lost one, too. 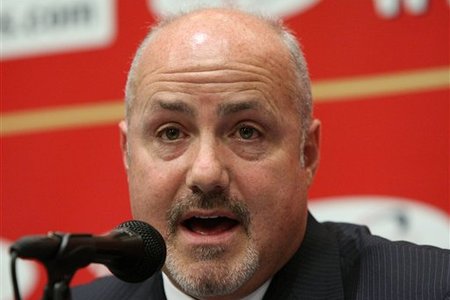 The last component of a plan is the ability to bring in and hoard young talent. You do that mostly through the draft, trades, and international signings.

The jury's still out on the draft. Stephen Strasburg and Drew Storen are still highlights. But take a look at some of their other first-rounders. Chris Marrero looks like he's heading to bustville. Colton Willems has already retired. Josh Smoker? Michael Burgess? Sigh.

On the trade front, Rizzo's been basically inert. His one big move brought in a 30-year old Nyjer Morgan while giving up a 25-year old outfielder and a 28-year old reliever. That's not to dismiss the trade, but it can't be looked on as one that advanced the "PLAN!"

Then there's the international market. Stan and crew have crowed loudly (and more importantly, vaguely) about how D.C. is an international city, and the presence of the embassies would give them a leg up. (Don't ask me either; I'm just recounting!)

After Smiley-gate, their international efforts have shriveled up. July 2 is the open season date, when teams can begin bidding for young international talent. As Nats Farm Authority notes, there's been a whole lot o' nuttin'. They haven't been in the mix for any of the higher profile players. And the players they have signed have all been older, including signing five 21 year olds. If these oldsters had All-Star potential, they likely would've been snapped up any of the last four or five years.

So where does that leave us? Not really in a good spot, especially if you believe, as I argued last week, that the team's window of success is surprisingly short. In a few seasons when that window shuts, it could be just as ugly as the last few have been.

The "PLAN!" is the right move. The Nationals just haven't had the right people in place. And they've just used it as a marketing gimmick without devoting proper resources or attention to it. That can certainly change. And maybe it will. But it's nowhere near the certainty that Stan Kasten's hubris-laden statements made us all think it would be a few short, but seemingly long, years ago.