John Wall just commented on LeBron James' decision to join the Miami Heat and apparently it was not the outcome he was expecting. Via Truth About It:

John Wall said he was "shocked" about LeBron's decision, thought he was going to New York.

Shocked? Really? Was anyone truly shocked by this news? Pretty much anyone I know figured that James was either going to Miami or staying in Cleveland. Actually going to New York would've been the real shocking news instead not going there.

If this is a measure of John Wall's prognostication abilities then I might have to question any predictions he might make from here on out.

As a matter of fact, until he gets his prediction percentage up to Paul the Psychic Octopus levels of accuracy, then I am not sure I can trust him right now. 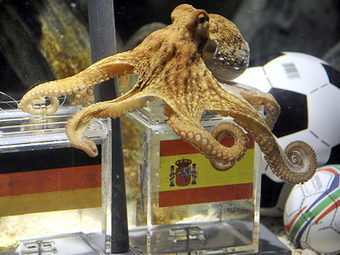 Some may be disappointed, some may be surprised, but shocked...c'mon now. It wasn't that big of a stretch to have Bron Bron sign with the Heat.