D.C. has a long, rich baseball tradition, and while the Nats shouldn't ignore the Expos, they should do more to acknowledge the city's baseball history.

Share All sharing options for: Expos Who? Nationals Should Honor D.C. First

At about 6:50 tonight, before a crowd eager to see Stephen Strasburg pitch, an old ballplayer with even older knees will hobble out to the plate after a long-winded speech by Phil Wood. The Nats are honoring one of the team's all-time greats, Hall-of-Famer Andre Dawson, for his contributions to the team. The crowd of 35,000 will sit there, wildly applauding their hero for the many, many contributions he made to the Nats, and the tens upon hundreds of big hits he had for Washington's fans. Like the time that he ... um ... well.

See, that's the thing. Dawson's recognition is igniting one of those debates that's never really been settled. Should the Nats honor their direct lineage? Or should they honor their figurative fathers? Is Steve Rogers the greatest pitcher in Washington Nationals history? Yes. At least if you're a literalist.

There are no Montreal Expos anymore. Kaput. Neither are there Seattle Pilots. Or St. Louis Browns. Or Boston Bees. Or Cleveland Infants. Or any of about a bazillion-and-one former baseball teams.

Off to the dustbin of history they should go. Lets read about ‘em in books. The Nationals aren't the Expos. The Orioles aren't the Browns. The Brewers aren't the Pilots. Even if they're all related.

That's not to say that the Nats shouldn't recognize their direct lineage in some way. Dawson's a figure clearly worth saluting. And the Expos experience is important to what the Nats are today. But the Expos numbers shouldn't be retired. And the Nats shouldn't be going out of their way to commemorate the Expos. Neither I nor any D.C. fan, for example, want a 30th anniversary celebration of the Blue Monday Expos next season. Hey, parents! Bring the kids out to see Larry Parrish!

The Nats should have a display somewhere in the stadium commemorating the Expos. They had some great seasons and some great players (Tim Raines better make the Hall!). But let's not kid ourselves; this isn't a team with a long history, and this wouldn't have to be a huge display. Just put up a few paragraphs, with some photos of the greats of the franchise. Tim Wallach (no, this isn't a joke) shouldn't be completely forgotten.

But the reality is that D.C. fans don't care. And, really, they shouldn't. D.C.'s situation is unique. This is a team that had major league baseball for decades. It's a city that has a tradition of baseball, and a long history with many great players and some significant Hall-of-Famers. 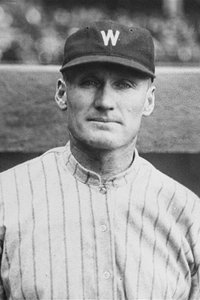 We shouldn't leave it up to the Minnesota Twins to honor Walter Johnson. He's ours, not some walleye fisherman's. Even if those records are technically the Twins franchise's, we don't have to subscribe to it. Those records don't belong to the Pohlad family; they belong to us.

And they belong to anyone who's ever rooted for a terrible baseball team that's played here in D.C.

Walter Johnson's our best player, not Tim Raines. Bert Blyleven is the greatest Twins' arm, not The Big Train. Some stupid little technicality isn't going to change that.

Maybe the approach the Nats are taking is the best one. Their official records have always included the Expos records, but also the Washington baseball ones. And their new ring of honor strikes a balance, recognizing Expos alongside the greats who played for other franchises based here in D.C.

D.C. has a long, rich baseball tradition, even if it's not necessarily a winning one. And that's what should be celebrated and commemorated. Give a nod to the Expos, but a firm handshake -- heck, a big, warm embrace -- to the Senators, versions I and II.

Fans should respectfully applaud Dawson tomorrow. He's a terrific player. But then they should cheer like hell for Strasburg, and wonder when the heck the team's actually going to get around to retiring Frank Howard's number.