Claiming that you're the best basketball player from the DMV area will only get you so far if you can't even top some guy named Curt Smith.

OK, so Steve Francis is not entering Stephon Marbury territory, even though you could see his comments to SLAM Magazine as a desperate thrust for one last grasp at relevancy ... or him just being idiotically silly. To recap, Francis said:

The SLAM article actually came out in April, as DC Sports Bog's Dan Steinberg has pointed out, but Francis also recently reiterated what he calls "true" statements to John Thompson on ESPN 980. Sure, most of Francis’ braggadocious words are just that ... talking smack ... as if acting like and thinking you are the best will make you better.

But too bad for Francis, not only is he wrong, but the game has passed him over. He is irrelevant and no past claims of greatness can negate that. 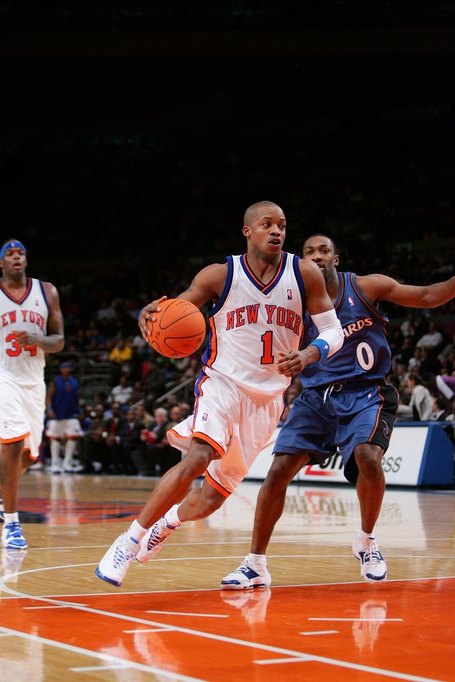 Oh yea, Francis also told SLAM that he was "the best point guard in the League from 2002 to 2005." Really now? It's times like this we should thank the database at Basketball-Reference.com. Taking those who played mostly guard from the 2002-03 season (when Francis played in 81 games and led the NBA with 299 total turnovers) to the 2004-05 season (filtering those who played more than 200 games during this time), weeding out those who didn't primarily play point guard, and organizing the remaining by PER (in parens), you are left with this list:

Not too insinuate that PER is the end-all, be-all for measuring top players, but in using it as perhaps the 'best' measurement out there, Francis barely cracks the top 10 NBA point guards over that 3-year span. BTW, see who's tied for first? A guy, Sam Cassell, from Francis' own D.C.-Maryland-Virginia area. Also, a case could be made to include Iverson in the area too.

Simply put, trying to compare Francis to worthy others, whether it's done statistically or through accolades, he loses. Did you know that using the span of Basketball-Reference's database (from 1946-47 to 2009-10), only one player in NBA history, who primarily played guard, appeared in over 500 games during his first seven seasons in the league, had more than 1,900 turnovers and shot less than .450 from the field? Yep, Francis did that. Not exactly winning point guard numbers.

I still can't believe that LaVarr Arrington said (essentially) that Steve Francis vs. Grant Hill was up for debate, because insinuating so is insult enough to the talents of Mr. Hill. The only thing Francis ever had on Hill was that the Franchise had a Reebok shoe commercial with rapper Scarface. Meanwhile, Grant repped Fila in a commercial with Bill Laimbeer. Yuck. 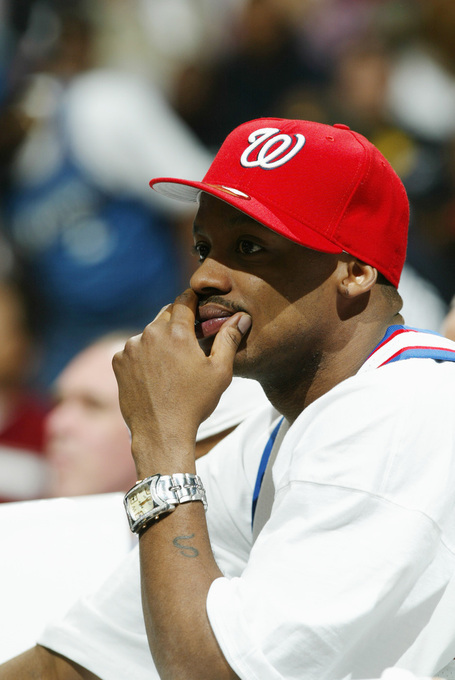 But really, let's throw stats aside and consider that in the minds of D.C. basketball fans, the Goodman League being often at the forefront of the discussion, Steve Francis isn’t even close to being the most beloved. And to be number one in this area, you got to be loved by the masses. Just ask Marion Barry.

Sure, Francis may have dazzled with high point totals and crafty moves, eliciting ooohs and aaaahs from the crowd, (though likely more along the lines of ‘Oh sh*t!! Did you see that?!?.’) But none of that means he was a crowd favorite. Tales of how he used to act would be denoted as LeBronsian in modern day times. Just take this quote from an October 2006 story by the Washington Post’s Mike Wise about Gilbert Arenas playing at Barry Farms

Many of the locals spoke of how former Maryland star and Knicks guard Steve Francis was almost booed off the Barry Farms courts two weeks before because he settled for a few jump shots and left with his unfriendly posse of maybe 10 without hardly mingling. Arenas drove himself.

Of course, that same Wise piece includes this quote about Arenas:

"It started with the free throws," Arenas said. "Then the arrest in Miami. The whole Olympic team ordeal. This has been a rough, rough summer. But you know what? I read a passage that said, 'The fish that swims upstream knows how strong he is.' That's what I did this summer. I swam upstream."

Yep, that’s our Gil ... just felt like including his "rough" 2006 summer for good measure. But I’m also willing to bet Arenas is still in more favor with D.C. b-ball fans than Francis.

Then there’s stories about Francis getting shown up by famed local product Curt Smith. From a 2002 article by Chris Palmer that appeared in ESPN The Magazine:

Last summer Steve Francis walked into McDonough with a team he called Francis' Hitmen, sporting a lineup that included himself, The Wizard, Moochie Norris, Jerome Williams and Cuttino Mobley. And lost. Dropped a 121-120 decision to a group of D.C. playground legends who made their names against these very same players years ago. They still talk about the battle between Curt Smith, little bro' of former Celts guard Charles, and Francis. The Rockets point guard gave the street legend 59 points from all over the court. The treys from the hash mark, wicked crosses and cradle dunks were enough to make sure Smith would never show his face in the gym again. Except for the fact he scored 62 himself. With a deadly fall-away in the lane and a slick separation move while going to the hole, the rock-solid, 6-foot Smith matched Francis shot for shot. And there were no freebies either. I know this for sure -- I was there.

And more from a 2000 article by Matt Hahn from the now defunct HoopsTV.com (available via the Internet WayBack Machine ... so I am going to quote liberally in this instance):

One team that brought the fans out in droves was the Francis Hitmen. Stevie Franchise was the team’s feature performer, (You saw the ridiculous HTV video of him droppin 62) but his supporting cast was nothing to sleep on. Moochie Norris, Jahidi White, Jerome Williams, Obinna Ekezie, and Walt Williams were all on NBA rosters last year. Wink even flew in Houston Rocket teammate Cuttino Mobley for a few runs. Remember Lawrence Moten and Victor Paige? Those two former Big East wreckers rounded out the squad.

Common sense would indicate that this ensemble of big timers dominated the competition and won the championship with ease. It didn’t happen. Why? Have some of Curt "Trouble" Smith. T ran for All Daz and established himself as the #1 stunner at the Kenner.

Who the hell is Curt Smith? He’s an assassin with a tight handle and an arsenal of offensive moves - a playmaker who launches bombs from beyond the NBA arc and rains teardrops over the outstretched arms of defenders when he gets into the paint. He’s also your resident playground hero, a basketball God in DC, who balled for Drake University but hasn’t made the jump to the league.

In the first meeting between of the summer between All Daz and the Francis Hitmen, "Trouble" killed so many cats that many witnesses left the gym wondering where DC was going to get the cash for the memorial to honor his victims. (Dermarr Johnson, Laron Profit, and Coach Thompson were among those observers). Francis was his usual nasty self, pouring in 40 and throwing down highlight reel dunks on the regular, but Smith stole the show. He was insane, scoring from everywhere and on everybody - including Stevie Wonderful. When the final horn sounded, he had dropped 65 and his team scored an upset victory.

The championship game yielded the same result. In the highly anticipated rematch, the Francis Hitmen - minus the Franchise - couldn’t hold Smith. All Daz’s Moochie Norris must have realized Smith couldn’t be stopped, because he mysteriously walked out of the gym with 5 minutes left in the third quarter. In the end, Smith hung 42 and racked up 12 dimes, en route to a 129-122 victory and Kenner League MVP honors.

Then there's legend that Francis once 'showed' Smith up (or maybe it wasn't Smith, internet record cannot confirm the relayed story) by digging out wads of money from his pockets, laying it on the court and/or giving it to fans, saying something to the effect of how he's so great because of money and finally exiting stage left (and this is after Smith supposedly out-dueled Francis on the court). Seems classy.

[For more about Curt Smith, check out this profile, supposedly from Slam but on www.freebasketball.netfirms.com, or this tale when Smith out-shined Kenny Anderson at the 1989 Capital Classic.] 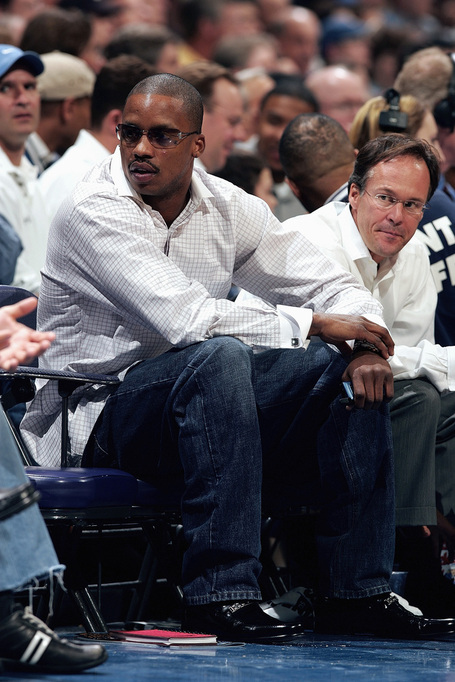 Is Steve Francis really worth all these words? No, but D.C. basketball is ... and when someone with the basketball dependency of a Quinton Ross jump shot tries to claim they're the best, they need to be set straight. If Steve Francis is wondering where's the love, tell him because of things like this, D.C. has none for him.

This guy on the other hand? Different story.