If this offseason is any indication, Fred Davis and Kareem Moore are each poised for a career year for the Washington Redskins.

If you were asked back in January to predict the two players who would benefit the most after Mike Shanahan took over as the new head coach of the Washington Redskins, I’m willing to bet you wouldn’t have immediately landed on tight end Fred Davis and safety Kareem Moore.

And yet, since the Redskins began preparing for the 2010 season, those two third-year players have easily been the biggest standouts for the burgundy and gold this offseason.

It seemingly doesn’t matter what day you go out and watch a practice. All you have to do is make the trip out to Redskins Park and you’re almost guaranteed to see both Davis and Moore shine.

Think about it this way, if you started a conversation about a Redskins tight end or safety with fellow ‘Skins fans, they’re probably not going to talk about Davis or Moore. No, they’re much more likely to bring up more established players such as Pro Bowler Chris Cooley or the hard-hitting LaRon Landry.

But if these youngsters keep it up, it’s only a matter of time before they become regular household names. 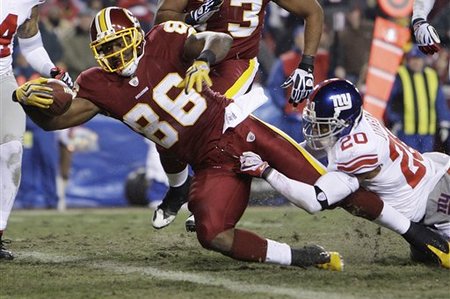 Sure, he did an admirable job filling in for Chris Cooley last year when the veteran tight end was injured, but we’re talking about a guy who, until that point, was most famous for oversleeping on his first day of work as a professional. That’s not really the first impression you hope to make. So when, exactly, did he get to the point where he’s playing so well that he’s suddenly forcing Shanahan and friends to figure out ways to get him on the field?

For my money, the transformation happened over the course of the final six games of 2009. You see, while some of his teammates had unofficially thrown in the towel on the season as early the Week 3 loss at Detroit, Davis was a guy who refused to quit.

Many players stand in front of a camera and spout clichés after a loss. Not Davis. He takes each and every loss personally. He openly admits that losing sucks and he’ll do anything to avoid it.

That’s probably because defeat wasn’t something Davis dealt with before coming to Washington. Through four years at USC, Davis’ Trojans went 47-5.

Sadly, the Redskins matched that loss total by their bye week last season (they were 2-5 at the break). Some guys accept defeat. Others take it personally. You can guess which camp Davis falls into.

"I’ve never been a part of a situation like this and I hope I don’t ever have to again," Davis told me after the Redskins bungled away a chance at victory against New Orleans last season. "With everything that has happened, I really hope I don’t have to go through this again in the future. It needs to turn around somewhere. I know it is going to turn around; I just wanted it to turn around this week against this team. It would have been really great to have a win against a team like that."

As the losses mounted in painstaking fashion, Davis tried his best to provide an offensive spark to the team’s dormant attack – as evident by his team-high six touchdown receptions.

Fortunately for ‘Skins fans, that first taste of success has only made Davis more determined. He’s dedicated this entire offseason to making himself the best football player he can be, whether it be in his route running, his blocking or anything else the coaches ask of him.

"Man, I’ve been waiting for this for a while now," Davis said. "I’m tired of being a backup. If they give you an opportunity, you’ve got to take it, you know what I mean? It’s on me to show these coaches what I can do and make them want to put me on the field." 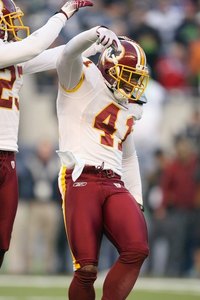 And what about Moore? His story is definitely a Disney "underdog" movie in the making. The Mississippi native allegedly began his collegiate career at Itawamba Community College. Don’t feel bad if you’ve never heard of it. No one else has either.

But Moore played well enough to earn All-American honors at the junior college level and eventually transferred to a slightly more established institution, Nicholls State. The Redskins saw enough out of him to use the 180th pick in the 2008 NFL draft on Moore.

Funny thing though: Moore was essentially an afterthought his rookie campaign, especially when a seventh-rounder from the same draft class named Chris Horton put up a "hat trick" against the New Orleans Saints – recording three turnovers in a single game. "The Predator" was born and Moore was faced an uphill battle. With guys like Landry, Horton and Reed Doughty in the mix, folks wondered if Moore would ever be anything more than a special teams contributor.

Last season, Moore finally earned some playing time with the defense, and even that didn’t go according to plan. You might remember that Moore was the guy who picked off Saints quarterback Drew Brees for his first career interception, only to have the ball stripped from him moments later by New Orleans receiver Robert Meachem.  Before the safety even knew what had happened, Meachem had gone 44 yards for a backbreaking touchdown and the Saints were on their way to a stunning 33-30 overtime victory.

How many times in the history of football does an interception lead to an offensive touchdown on the same play? I’m too lazy to look it up, but I’m willing to bet it doesn’t happen every day.

But Moore didn’t feel sorry for himself. Like Davis, he spent his offseason ensuring that when the opportunity presented itself, he’d be ready.

"He's athletic and he's big, he's 215 pounds," said Redskins defensive coordinator Jim Haslett of Moore. "He can run. He's a playmaker. I think he'll tackle. I've seen him tackle. I think he'll be a good guy in the back end and he'll give you some options."

That’s one aspect of Moore’s game that people tend to sleep on – the guy can lay the wood, when need be. Ask Chad Ochocinco.

"I expect big things out of myself this year," Moore said. "I wouldn’t accept anything less, man. I’m just going out here and trying to show everyone that I can play at this level. I’m out here to prove everyone wrong who said I can’t do it." 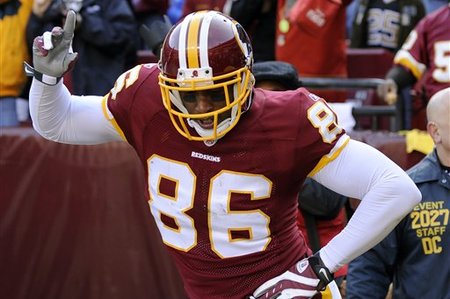 With the preseason opener just days away, others will tell you to watch as Donovan McNabb makes his Redskins debut or Albert Haynesworth commits his next selfish act, but the real story this offseason is the emergence of Davis and Moore.

They’re two driven athletes hoping to beat the odds by becoming productive NFL players (even though Vinny Cerrato drafted them). Everything I’ve seen over the last few months tells me it’s only a matter of time. Consider this your last chance to jump on the bandwagon while there’s still room.