Which Wizards Home Games Are The Ones You Need To See?

The Wizards' 2010/11 schedule is out, so which games are the ones you have to see? We rank all 41 home games and tell you which ones deserve most of your attention.

Share All sharing options for: Which Wizards Home Games Are The Ones You Need To See?

The 2010/11 Wizards schedule is now, and in an ideal world, we at SB Nation D.C. would recommend you attend every single Wizards home game next season. They should be incredibly fun to watch, with John Wall providing the buzz, JaVale McGee providing highlight dunks, Andray Blatche continuing to shine (crosses fingers) and Gilbert Arenas starring again (really crossing fingers).

But we also understand that you have budgets and can't necessarily afford to drop the kind of money necessary to attend every single game. While I think a full-season package is worth it, I understand if you have some misgivings after what happened last season. You also might be in some sort of office group, which means you have to split up your season tickets with other people. If one of the above describes you, then you need to prioritize which games you end up attending next year.
Here at SB Nation D.C., we're here to help. Which games are ones you have to see? Which ones are games you can skip if you have to do do? To answer these question, we've decided to rank the appeal of all 41 home games, so you don't have to do so yourself. We've broken the games down into four tiers, ranging from "easy to skip" to "can't miss." Hopefully, this will help you rip off those co-workers in your office group.
(As a heads-up, all games are at 7:00 p.m. unless otherwise noted). 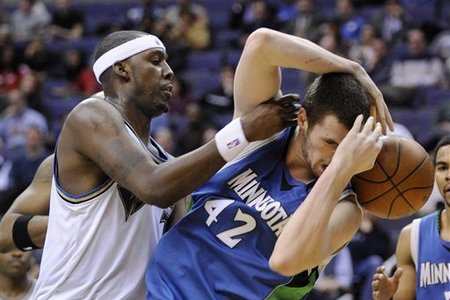 41.  Indiana Pacers: Monday, December 29: The Pacers are a pretty boring team, with only Danny Granger able to maybe capture your attention, and teams tend to play uninspired ball around the holidays. Throw in the fact that this is a Monday, and you can safely use this time to figure out your New Year's Eve plans.
40.  Minnesota Timberwolves: Saturday, March 5: The Timberwolves are probably going to be the worst team in the league, so don't feel bad if you find better things to do on this Saturday night.
(Though it should be fun to see how much Michael Beasley is affected by returning home. I'm guessing we'll see some particularly uninspiring play from him on this night).
39.  Toronto Raptors: Tuesday, November 16: The Wizards and Raptors have played a ton of entertaining games in recent years, but all of them included Chris Bosh. This one won't, and it's on a Tuesday.
38.  Indiana Pacers: Tuesday, February 22: The Pacers are boring, as we already noted, and it's a weekday. It's also the first game after the All-Star Break, which could be a good or bad thing. I guess it depends on what happens over the weekend.
37.  Charlotte Bobcats: Monday, December 20: The Bobcats have one of the ugliest styles of play in the league, and this is another game close to the holidays. It's also on a Monday.
36.  Milwaukee Bucks: Tuesday, March 8: The Bucks are actually a pretty good team, and Brandon Jennings can sometimes put on a show. But they also play a pretty ugly style, and it's on a Tuesday. If you love watching Andrew Bogut destroy JaVale McGee, I guess this game is for you. Otherwise, I suggest passing if you have to do so.
35.  Toronto Raptors: Saturday, January 15: The only reason this game gets a slight boost is because it's on a Saturday. Otherwise, it's the Bosh-less Raptors again, and that's not fun.
34.  New Jersey Nets: Sunday, March 20 (1 p.m.): The Wizards only have one 1 p.m. Sunday games on this year's schedule, as opposed to the four they had last season. So if you're looking to bring the whole family, this is your best bet. That said, it's the Nets, and they probably won't be very good this year.
33.  Cleveland Cavaliers: Friday, April 1: LeBron James and the Cavaliers renew their big rivalry with the Wizards in this key April late-season showdown.

32.  Philadelphia 76ers: Tuesday, November 23: This won't be Evan Turner's first visit to the Verizon Center (that's higher on this list), so we're left with few key storylines for this one.
31.  Charlotte Bobcats: Friday, November 12: Because I love Shaun Livingston, I personally will be excited for this one, because it's his first game back in D.C. But most of you probably don't care as much as me about Livingston.

30.  Milwaukee Bucks: Wednesday, February 9: As noted above, the Bucks have some stars, but they play an ugly style. However, this game is on a Wednesday, so you can celebrate Hump Day with a nice little John Wall/Brandon Jennings showdown.
29.  Golden State Warriors: Wednesday, March 2: The Warriors are a bad basketball team, but they are at least a fun bad basketball team. If you like lots of scoring, you should enjoy this one.
28.  New Jersey Nets: Friday, January 7: This Nets game goes in this category because it's on a Friday, not because it's a chance for Yi Jianlian to get his revenge on the team that traded him. Though I guess there's also that.
27.  Detroit Pistons: Tuesday, April 5: A late-season game between two likely lottery teams is only mildly intriguing because it marks Greg Monroe's return to the District. The Pistons only play the Wizards in D.C. once, so if you're desperate to experience Monroe's homecoming, you should check this game out.
26.  Portland Trail Blazers: Friday, December 3: Greg Oden will probably be injured, but the Blazers still have Brandon Roy, and he can be a lot of fun.
25.  San Antonio Spurs: Saturday, February 12: Hopefully DeJuan Blair isn't dominating. I don't want to offend "cash." (Sorry, we have John Wall - no more being bitter).
24-23.  Atlanta Hawks: Saturday, April 9 and Saturday, February 5: Really, take your pick here. Atlanta's a mildly interesting team this year, so they belong in this category.
22.  New York Knicks: Friday, December 10: Amare Stoudemire's lone visit to the Verizon Center. The game will be fun because of that, but it's also the Knicks. There are better teams out there.

GROUP 3: Only Miss If You Have To 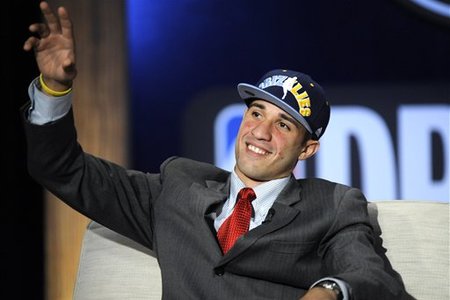 21.  Memphis Grizzlies: Friday, November 19: Greivis Vasquez makes his only trip home this season, which means you should expect a big entourage of fans, a lot of Maryland jerseys and a lot of smiling from Vasquez himself. Oh, and Memphis is an interesting young team too.

20.  Houston Rockets: Wednesday, November 20: Yao vs. Yi. There can only be one.
19.  Chicago Bulls: Monday, February 28: We'll have another John Wall-Derrick Rose showdown higher on this list, but if you miss that one, this one's a good consolation prize, even if it's on a Monday.
18.  Phoenix Suns: Friday, January 21 (8 p.m.): John Wall's lone matchup with Steve Nash should be great, even if it starts later than you might want because it's on ESPN.
17.  Los Angeles Clippers: Saturday, March 12: Assuming Blake Griffin's knee holds up, this will be a battle between the last two No. 1 picks in the NBA Draft. The Wizards really would have loved to have Griffin in 2009, but hopefully this game will show that Wall's the bigger prize.
16.  Sacramento Kings: Tuesday, January 11: This is the game your office pool buddies will probably miss, but it's a game you really should snap up if you can. Not only is it the only chance you'll get to see Wall go up against his college teammate DeMarcus Cousins, but it's also the only chance you'll get to see Wall and Tyreke Evans do battle. Also, the Kings are a fun young team, like the Wizards, and play an up-tempo style that's aesthetically pleasing.
15.  Boston Celtics: Saturday, January 22: The upside? It's the first chance you get to see the defending Eastern Conference champions. The downside? Tons of annoying BAWSTON sports fans taking over the Verizon Center.
14.  Cleveland Cavaliers: Saturday, November 6: Antawn Jamison makes his return to the Verizon Center. I wonder if he'll address the crowd this time.
13.  Orlando Magic: Friday, February 4. It's a Friday night, and one of the best the Eastern Conference has to offer is rolling into town.
12.  New Orleans Hornets: Saturday, January 1: Sure, you might be hung over by this point, but you won't want to miss this duel between Wall and Chris Paul (assuming Paul is actually on the Hornets by this point).

11.  Orlando Magic: Saturday, November 27. Dwight Howard comes to town for the first time, and it's on a Saturday night. This will be an interesting test early on to see where the Wiz-kids are at.
10.  Los Angeles Lakers: Tuesday, December 14: This is Kobe Bryant's only visit, which is good. On the flip side - there will be tons of annoying Lakers fans present. Still, it's not like you can see Kobe again this year.
9.  Denver Nuggets: Tuesday, Janaury 25: Carmelo Anthony makes his lone visit to D.C. I'm guessing a "WE WANT MELO" chant will happen at some point.
8.  Dallas Mavericks: Saturday, February 26: If you want to see three-fifths of the 2007 and 2008 Wizards starting lineup, you have to check this one out. This is the only time Caron Butler, DeShawn Stevenson and Brendan Haywood will roll through town.
7.  Utah Jazz: Monday, January 17 (1 p.m.): The last time the Jazz played the Wizards on Martin Luther King Jr. Day, this happened.
6.  Boston Celtics: Monday, April 11: This is the last home game of the year, so go, because otherwise, you'll be in John Wall withdrawal for even longer than you normally would be.
5.  Miami Heat: Wednesday, March 30: Mike Miller's return! (Oh, and LeBron too).
4.  Oklahoma City Thunder: Monday, March 14: Kevin Durant's only visit to the District. Maybe Barack Obama will come out after snubbing him for his pickup game.
3.  Chicago Bulls: Wednesday, December 22: Our first John Wall/Derrick Rose matchup beats out Durant's only visit because it's on a Wednesday instead of a Monday.
2.  Miami Heat: Saturday, December 18: This is your first chance to boo LeBron James, so I suggest you take advantage of it.
1.  Philadelphia 76ers: Tuesday, November 2. Because the first game is always the one you have to see. That it comes against No. 2 draft pick Evan Turner makes it that much better. 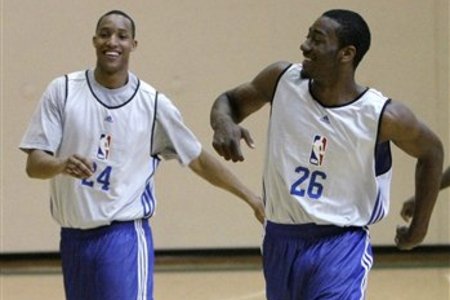