Half Smokes readers, I want to offer you all a sincere apology. You see, the picture below of the Prince of Wales trophy with the Washington Capitals mistakenly engraved as last year's Eastern Conference Champions is kind of old news, because it showed up last week on Capitals blog Rock The Red. But it's the first time I've heard of it, so I'm blogging it now.

What happened? Basically, about a week ago, pictures surfaced of a Prince of Wales trophy that listed the Capitals, and not the Philadelphia Flyers, as the Eastern Conference champion. It was assumed that the whole thing was a hoax, and CSN Philadelphia even went so far to "confirm" that the trophy wasn't real. The only problem? It was real, and it was a mistake.

How do we know? Yesterday, Greg Wyshynski of Yahoo! Sports' Puck Daddy talked to NHL Hall of Fame spokesperson Kelly Masse, who confirmed the images were real.

"It was not Photoshopped. It was a real picture," she said. "What happened was that it was incorrectly engraved, and the Hall of Fame people with the trophy realized it in Chicago. When they got back from Chicago, they got it properly engraved."

The confusion happened because the person to whom CSN Philadelphia spoke thought they were asking about the duplicate trophy at the Hall of Fame, not the one that actually travels. A classic mixup, if I say so myself.

Anyway, the bottom line is that it was an error by whoever engraves the trophies that occurred because he/she was rushing to get it done. Oh well. Here's hoping that ends up as a collector's item somewhere. 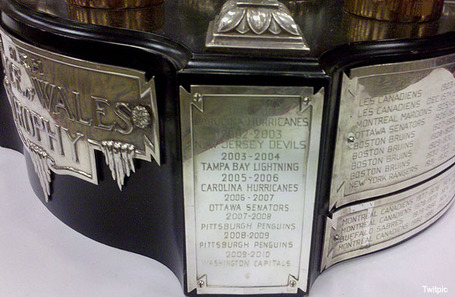