If Donovan McNabb doesn't sign a contract extension, could John Beck be the Redskins' future starter?

Share All sharing options for: John Beck: Redskins Quarterback Of The Future?

Why? It’s possible that Dutch could be the answer to the trivia question: Who did the Redskins give up in the trade that brought longtime starting quarterback John Beck to Washington?

Okay, yes, I’m getting way ahead of myself. Beck hasn’t played a snap yet for the Redskins. But penciling in John Beck as the future of the Redskins quarterback position isn’t totally outside the realm of possibility. Follow along with me here. 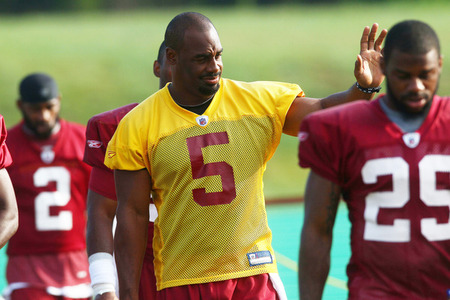 One dark cloud that’s looming ominously on the horizon approaching the Redskins 2010 season is that quarterback Donovan McNabb is in the final year of his current contract. Both sides are saying all the right things. Everyone wants McNabb to be here next year and long into the future. He’s supposed to retire a Redskin. And there are some good reasons for him to wait before signing a multi-year contract. The unresolved collective bargaining agreement is one of them. The potential for record-breaking contracts for Peyton Manning and Tom Brady is another. McNabb might just want to see how things work out in his first season in a new offense before committing to staying

On the flip side, there might also be some good reasons for the six-time Pro Bowler to skip town when the 2010 season comes to a close. Rumors that he wants to be reunited with his former quarterbacks coach and offensive coordinator Brad Childress with the Minnesota Vikings just won’t go away. That could be a very real opportunity for McNabb after Brett Favre retires (in 2011, or 2012, or 2025). He may also choose to pursue the starting quarterback job with the Arizona Cardinals, a great team missing a leader. We all know that McNabb has a house in Arizona. Why not make it a permanent move?

If Donovan McNabb does indeed depart from the Redskins after only one season, the team would be left in dire straits. 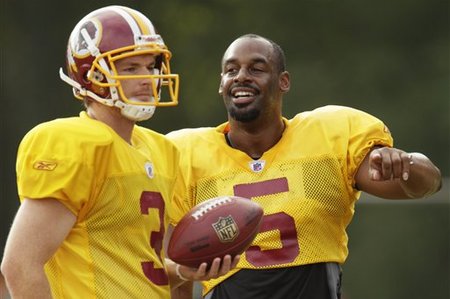 Or would they? Maybe not. Not if John Beck has anything to say about it.

Beck was specifically targeted by Mike and Kyle Shanahan to join the Redskins. They had their eyes on him since college. They hand-selected him to be a member of this team. Beck had an outstanding college career, finishing the 2008 season with 32 touchdowns and a passer rating of 116.3. The last time that Mike Shanahan had a four-year college starter / Heisman Trophy candidate as his quarterback, he won two Super Bowls and turned out to be a pretty decent player. I’m not saying that John Beck deserves to be compared to John Elway, I’m just saying that he wouldn’t be the first good quarterback to come out of Brigham Young University.

Maybe a better comparison though would be Matt Schaub. Like Beck, Schaub began his NFL career on the bench. He earned himself a starting job by impressing every year during the preseason, and serving as Michael Vick’s backup for the Atlanta Falcons. With Kyle Shanahan as his offensive coordinator last year with the Houston Texans, Schaub led the NFL in passing yards with 4,770. He bought into Shanahan’s system, and it worked for him. If John Beck is equally moldable, and does well in the 2010 and 2011 preseasons, he could very well be the next Matt Schaub, and the next starting quarterback here in D.C.

We expect Beck to get plenty of work in the Redskins’ first preseason game Friday night in Buffalo. He’ll probably take around 50% or more of the snaps. McNabb is set to participate in only 15-18 plays. Richard Bartel has a hamstring injury. Rex Grossman is, well, Rex Grossman.

When you’re watching the game Friday night (you know you will be), it may be time to wonder to yourself: Am I watching the first game of the John Beck era?