It's good to know the scoreboard at Fed Ex Field is capable of showing more than 40 points for the home team as it did in the Redskin's 42-17 preseason win over the Buffalo Bills. As I watched the game I kept reminding myself it was only a PRESEASON game (or exhibition as they are called in other sports).

While doing that, the next thing I thought of was Osaka, Japan. You know, when the Steve Spurrier-led Redskins rolled the 49ers 38-7 in his debut, even running up the score. I thought it was a good cautionary tale, so I decided to tweet it, but before I could get out the snarky tweet it was already tweeted by countless others.

Then, it dawned on me: Comparing Spurrier's NFL existence to Mike Shanahan's would be rather insulting. 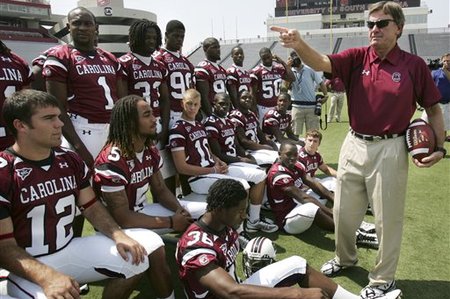 Sure they are both Florida Gators, but outside of that, they are VERY different NFL different Coaches. Shanahan runs a tight ship; Spurrier ran the fun and gun. There is also the little matter of Shanahan's two Super Bowl rings and the fact that Spurrier lasted just two seasons in the NFL

(I will give The Ball Coach the edge with entertaining the media.)

Plus if you remember, Spurrier acted like his team had just won the SEC Championship Game, while Shanahan was hardly celebrating.

"It's a first step," Shanahan said. "We've got a long ways to go, but you always want to find a way to win the football game and I was happy we did that. I thought we did some good things during the game. There's some pluses and obviously some minuses and we'll grow from there."

I would also be willing to bet anything that, if the Skins' offense is struggling mid-season, Shanahan will not try to defend it by talking about the glorious night they hung 42 on the Buffalo Bills in the preseason. Spurrier could never get past that magical night in Osaka.

I understand why Redskins fans are being cautious. They don't want to get their hopes too high, only to be disappointed again like they have over the last decade. However, this is not the Jim Zorn/Spurrier/Marty Schottenheimer/Norv Turner/Joe Gibbs Part 2 Redskins. This a new era of Redskins football. New coaches, new schemes and, yes, a real front office. 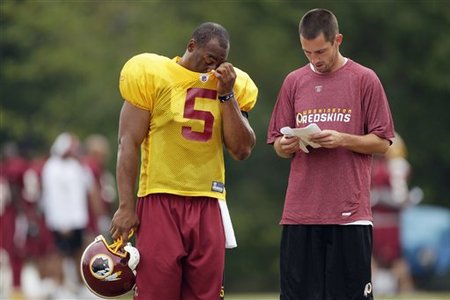 Speaking of ... the new front office did not leave their faith in the hands of failed NFL QBs like Spurrier did. Instead, they acquired a real NFL QB that still had good years in front of him. In his brief appearance Friday night, Donovan McNabb did what he does. He spread the ball around, got it out of his hands quickly, moved the chains, protected the football and got his team in the end zone. I have already professed my faith in No. 5 in a previous column. Keeping him upright is priority No. 1 this season. Mike Wise went as far to as suggesting that the Skins treat McNabb like fine China.

McNabb's health will be key, but at least Rex Grossman looked capable the other night just in case. You would also have to figure McNabb's health will benefit by Shanahan's commitment to the ground game (something McNabb never had in Philadelphia). The running backs looked pretty good even without Larry Johnson, Willie Parker or Brian Westbrook in the mix against the Bills. It's also refreshing not to have the annual "Clinton Portis does not want to play in the preseason" game story.

But preseason is not about wins and losses. It's about making progress, and there is still plenty of progress that needs to be made between now and the opener against Dallas. The retooled offensive line, and the rest of the offense for that matter, will get tougher challenges in the next two weeks from the Ravens and Jets.  The defense is still a work in progress transitioning to the 3-4 scheme, which even Albert Haynesworth now likes. Danny Smith's special teams has some options to weigh in the return game, though it's nice to see Brandon Banks run forward instead of pulling an Antwaan Randle El.

Although the games are not played to capacity attendance and the starters don't go the entire game, the preseason has a purpose, and is important.  So enjoy the fact that, for starters, the Skins have made progress. Yes, even from that fateful night in Osaka.