Beating the Buffalo Bills is nice, but if the Washington Redskins want to be taken seriously, they'll need to start by handling the Baltimore Ravens this weekend.

Preseason or not, the Washington Redskins put together one of their most inspired performances in recent history with their 42-17 thumping of the Buffalo Bills Friday night.

In the debut of head coach Mike Shanahan and quarterback Donovan McNabb, the Redskins had little trouble moving the ball on offense, created constant pressure on defense and special teams, for the first time in seemingly decades, tilted the field in favor of the burgundy and gold.

McNabb was solid, completing five of eight passes for 58 yards and a touchdown in limited action. The 33-year-old even surprised a few folks by keeping the team’s second drive alive with his legs – something Philly fans were convinced he could no longer do.

Once the six-time Pro Bowler was done for the night, backup quarterback Rex Grossman saw his first action as a member of the Redskins. And if McNabb was good, then "The Rex Cannon" was great.

Having spent last season in Houston with Kyle Shanahan, it was readily apparent that Grossman has already found a comfort level in this offense. The only thing prettier than Rex’s first touchdown pass – a nine-yard dart to tight end Fred Davis in the second quarter – was his second touchdown.

On that play, Grossman was able to do something rarely seen during the Jason Campbell era – display touch and accuracy on a deep ball – dropping a 44-yard bomb into the waiting arms of receiver Devin Thomas to effectively end the competitive portion of the evening at 35-3.

If McNabb is ever forced out of action for any length of time this season, ‘Skins fans can only hope that Grossman is able to replicate his performance on this night. And if Grossman goes all Colt Brennan on us – playing lights out in his debut and never coming close to that level again – well, at least Hawaii will love him.

Jim Haslett’s 3-4 defense was equally impressive against Buffalo. While keeping things admittedly "vanilla," the Redskins were able to pressure Bills quarterbacks to the point that even disgruntled defensive lineman Albert Haynesworth was impressed with the showing.

And special teams … wow. What can I say?

Someone allegedly named Brandon Banks came out of nowhere and is now the talk of the town, after busting out a 77-yard punt return for a touchdown. The undrafted rookie out of Kansas State finished the game with four returns for 97 yards and a touchdown. To put those numbers in proper context, Antwaan Randle El finished the 2009 season with 17 punt returns for 102 yards. In 90 attempts over the last three seasons, Randle El never returned a punt for a touchdown and his longest return was 43 yards. So basically, on Banks’ next punt return, he’ll likely match Randle El’s production for an entire year. Whether that says more about Banks or Randle El is your call.

In short, the preseason opener was everything ‘Skins fans could have ever hoped for. The stadium was rocking, the new high-definition video boards were a dream come true and the Redskins actually resembled a competent football team for the first time since Joe Gibbs said goodbye. 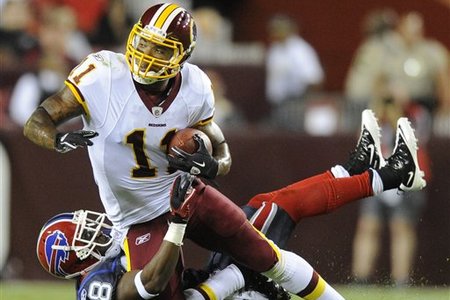 Here’s the thing though – none of it matters.

Sure, if they keep score, you want to win. But, we’re talking about the Buffalo Bills. Everyone, except apparently Bills owner Ralph Wilson Jr., knows Chan Gailey is a below-average coach. Outplaying Gailey’s team is to be expected.

You want to impress somebody? Do it again this weekend against the Baltimore Ravens.

While the Redskins went just 12-20 during Jim Zorn’s two-year stint as a head coach, the Ravens went 20-12. While Redskins players began planning their vacations by Thanksgiving, Ravens players picked up three playoff victories over the last two seasons.

In recent history, the two franchises have been polar opposites. And our nation’s capital, as painful as it is to admit, has been on the short end of the stick.

Just last year, the Redskins were abused by the Ravens in their preseason opener, 23-0. Led by quarterback Joe Flacco (hon!) and running back Ray Rice, Baltimore racked up a mind-numbing 500 yards of total offense against the Redskins, who were held to just 196 total yards. Oh, and just to make sure everyone got in on the action, the Ravens had 11 different receivers catch a pass of 10 yards or more that night.

I’m convinced the Ravens could have played iron-man football with their junior varsity squad against the Redskins’ starters for the entire game and the results wouldn’t have changed – that’s how clearly overmatched the good guys were. The last time Baltimore was involved in a beatdown of this magnitude, Omar Little was teaching local drug dealers a lesson. Sure, it was only a preseason game, but clearly it was a precursor of things to come. 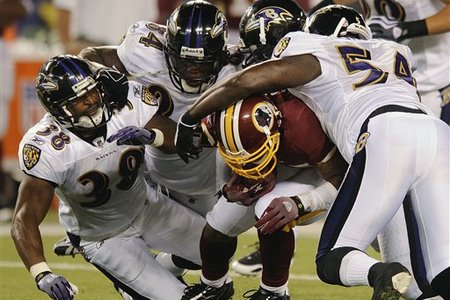 So here we are, one year later.

Redskins nation sees Shanahan, McNabb and friends as a sign of hope that the franchise, sooner than later, will return to relevance. That game planning and preparation will now involve more than a slip-n-slide or a dodgeball. Hell, maybe even FedEx Field can host a playoff game for just the second time since the doors opened back in 1997. That’s the kind of crazy talk you hear from ‘Skins fans these days.

If that’s what’s in store, then let’s start by playing competitive football against Baltimore. The Bills have been a dreadful as the Redskins of late, but the Ravens are openly talking about Super Bowl aspirations. They believe the pieces are in place to make a legitimate run at their second Lombardi Trophy and are the perfect gauge to see just how far the Redskins have come. Beating them might be meaningless in a month when the regular season starts, but for now, it’s the perfect test.

If people are going to take the Redskins seriously this year, then it starts this weekend. Show up to play and deliver a little payback for the embarrassing shutout you were dealt a year ago. Send a message to the Ravens quarterback coach, a guy by the name of Jim Zorn, that the best thing that could have happened to the franchise was booting him to the land of purple camouflage. Prove to Ray Lewis and company that you’re no longer pushovers and deserve a seat at the grown-ups’ table.

In short, go out there and make believers out of all of us. Do that, and then you’ll have everyone’s undivided attention.