Why Carmelo Anthony To The Wizards Is A Pipe Dream

Many Wizards fans are dreaming of bringing Carmelo Anthony back home, but practically, there's pretty much no way the team can make a trade happen.

Share All sharing options for: Why Carmelo Anthony To The Wizards Is A Pipe Dream

With news that Carmelo Anthony wants out of Denver, I imagine Wizards fans are starting to dream of a John Wall-Melo combo in D.C. in the near future. Hey, I'm excited about the prospect too. What's not to like about the idea of the hometown product teaming with the most dynamic point guard prospect to come in the league in quite some time? Nothing, really. This isn't going to be a feature that downplays Carmelo himself and suggests he's not worth acquiring. He is.

But as we all know, wanting Carmelo Anthony and actually making a move for him are two completely different things. For the Wizards, that's where things start to break down. You can never say never, because things happen, but there's pretty much no realistic way I can conceive the Wizards actually being able to put a package together to trade for Carmelo Anthony.

Why? Two reasons: philosophy and money. 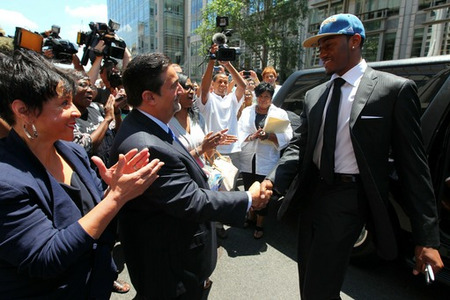 You probably already know about the philosophy part, but it's worth reviewing. The fact of the matter is that owner Ted Leonsis believes in building a core through the draft, not through trade. Leonsis is an owner that shunned chasing after LeBron James because he did not want to make moves just to get headlines. Here's what he said to Wizards fans right before the NBA Draft.

I am loathe to the notion that if we added one player we would be a great team that could win championships. That is a notion that I reject out of analysis of past great teams, and out of personal experience. You must put in the hard work on all of the above; you must use all of the tools at your disposal; you must measure and improve season after season; you must make the investments; you must be in the process daily; and you must be in the moment and believe in what you believe.

For the most part, the draft is the primary way to build a core of great young talent that builds the foundation of a great team. Look at LA, at San Antonio, at Houston, at Chicago, Detroit, Boston, Miami. Seven teams have won championships in the last 20 years. Each has foundational players that were brought into the team via the draft. That drafted player has been the identity of the team, the leader of the team, and for the most part, the team's best player.

Right or wrong, Leonsis' biggest strength as a team owner has been his commitment to that philosophy. He hasn't chased big-name players with the Capitals, preferring instead to augment Alex Ovechkin, Niklas Backstrom and company with complimentary players even as the team became so successful. This summer, he signed off on smaller deals for Kirk Hinrich and Yi Jianlian instead of chasing James with the team's cap space. I find it very, very hard to believe that he'll do a complete 180 within the calendar year and sign off on trading pieces of that young core for Carmelo Anthony.

But more specifically, a trade for Carmelo Anthony is almost impossible to do legally right now, no matter the owner's philosophy. 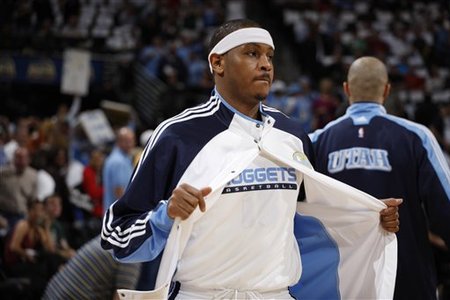 In the NBA, when you make a trade, the player salary you take on must be within 125 percent of the salary you trade away, unless your team is under the cap. As of right now, the Wizards are right around the salary cap figure, so this rule applies to them. The Nuggets are well over the salary cap, so this rule definitely also applies to them. Next season, Carmelo Anthony's salary figure is $17.15 million. Therefore, the Wizards need to send out at least $12.9 million to make the salaries match.

Here is a list of the main Wizards' salaries right now, via Sham Sports:

If Denver is to trade Carmelo Anthony now, they will surely want to avoid taking on big long-term contracts from anyone. The primary motivation would be to get some young pieces and cap flexibility, not to just replace Anthony's contract a worse contract. Therefore, a package that would be most enticing to them legally is one that gives them one large expiring contract and a couple promising youngsters. The expiring contract makes the trade legal, and the prospects are the real prize.
As you can see, the Wizards do not have those big expiring contracts. Their two biggest contracts are Arenas and Hinrich, but neither expire this season. Arenas' deal, at this moment, is radioactive, so there's no way the Nuggets would trade for it, while Hinrich's is probably enough of a burden where the Nuggets wouldn't want to take it on. Essentially, the Nuggets would be getting a player who isn't half as good for half the price over the next two years. That's not something they'd want.
Strip those two away, and there's really no way the Wizards can get to that elusive $12.9 figure. They would have to give away three or four players, and the Nuggets do not have enough roster space to take all of them on. Talent-wise, an Andray Blatche/Al Thornton/Kevin Seraphin/draft pick package may make sense, but it's an illegal trade because the salaries don't add up.
Without the ability to match salary, the Wizards are pretty much out of options. Their only chance is to perhaps offload Arenas or Hinrich onto a third team, but there are few clubs far enough under the cap where they don't need to adhere to the 125-percent rule. They also could wait until next summer, where they could have enough cap room to sign Anthony outright if they decline the contract options for Young and Thornton, and hope Anthony is still there, but that seems unlikely at this point because of the potential for a new Collective Bargaining Agreement. Anthony is pushing for a trade now because his new team can immediately sign him to a more lucrative contract extension then he'd likely get in the new CBA. Waiting for him seems like a losing proposition. 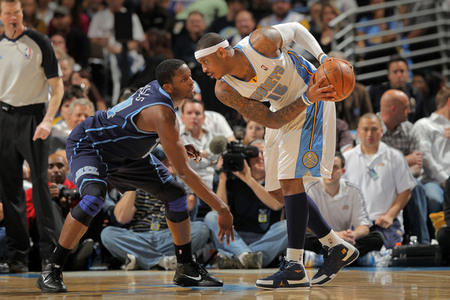 Again, I hate to be a buzzkill. In a perfect world, the Wizards would circumvent these rules. But this isn't a perfect world; this is reality. While you can never say never, there's pretty much no conceivable realistic way to bring Anthony home.