The Nationals' Draft Was Good, And It Could Potentially Be Great

Off the field, it was a pretty good week to be a Nationals fan. We'll have to wait five or six years to see if it was a great one.

Share All sharing options for: The Nationals' Draft Was Good, And It Could Potentially Be Great

It's been a pretty good week to be a Nats fan -- at least if you've managed to keep yourself away from the TV and from looking at the boxscores. Sure, the games have stunk, but off the field, just about everything went right.

Notably, they gave $799,999 to Robbie Ray, their 12th round pick, which blew the slot recommendation away. Ray, a left-handed starter from Tennessee, fell in the draft because teams were confident that he was going to the University of Arkansas. The Nats took him anyway, and found a way to get him signed. They got early-round talent with a low draft pick for nothing more than a little bit of cash.

They did the same with their 4th-round pick, AJ Cole. Cole, a beastly 6-foot-5 righty from a high school in Florida, had committed to the University of Miami. As with Ray, teams shied away given that strong commitment, even though most draft experts figured he had first-round talent. The Nats scooped him up, and threw $2 million at him. They gave their fourth-rounder a contract worthy of a first-rounder, and he took it. Again, early-round talent with a low pick. And for nothing more than some cash.

Unlike past years, the team went the extra step to get these players in and done. The lip service they payed to the so-called "Plan!" finally became more than mere whispers. Having the players signed is great, but the fact that the team's ownership, it seems, finally gets it is more important. They finally understand what they need to do to compete. Every team wants to win. Every team has their version of the plan. It isn't about saying you have this goal; it's about going out there and being better than 29 other teams at it. And in this case, they were. 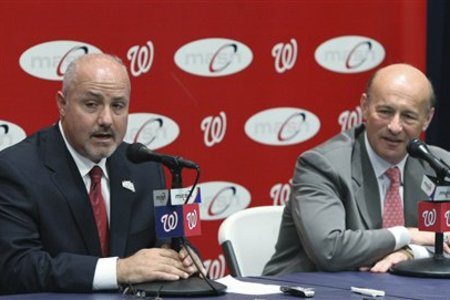 But despite the success of this week, Nats fans shouldn't get too excited. Or they should at least temper their enthusiasm. The draft, as we know, is a bit of a gamble. And despite the successes of Ryan Zimmerman and Stephen Strasburg, it's no sure thing.

Look a few drafts back when the Nats were the toast of baseball for their smart drafting and signing of Jack McGeary and Josh Smoker. Even before his Tommy John surgery, McGeary was struggling. Josh Smoker's 7-plus ERA at Single-A indicate how far away he is, too.

The heralded guys don't always get it done. Injury, attrition, stagnation ... there can be lots of reasons drafted players never make it.

But that's why Mike Rizzo's favorite word is so important. If you hear him ramble on about players, he won't go too long before he mentioned "inventory." It's as if he's a quartermaster of an old Civil War unit and that his pitchers are hard tack. Hearing him describe humans as basically items to be accounted for can be a bit jarring, but in the abstract it can make sense.

The Nationals need a big stock of things because so much can go wrong. If, say, one player out of five makes it, then if you want three to make it to the majors, you need 15 players. As it is, of those 25 selected, if five of them make the majors, it's been a wildly successful draft.

The more players you have under control, the greater your odds of one of two of them really surprising the heck out of you and breaking out. But the larger that number, the larger the number of failures, too.

So it's terrific seeing the Nats signed 25 out of 26. But that doesn't guarantee anything.

All in all, it was a good week. We'll have to wait five or six years to know if it was a great one.