For Once, No Question At Quarterback For The Redskins

Donovan McNabb gives the Redskins some rare stability at the most important positon on the field.

Share All sharing options for: For Once, No Question At Quarterback For The Redskins

A strange thing happened this past Thursday on Day One of Redskins Training Camp. Head coach Mike Shanahan took the podium for his standard post-practice media session ... and he did not get a single question about his starting quarterback.

Now, to be fair, that's partially because of the Albert Haynesworth saga. But if you read between the lines, what is there to ask? For once, the Redskins actually have a known quantity at the most important position.

Outside of the President of the United States, no other job in Washington D.C. is as scrutinized as the Washington Redskins' starting quarterback. Donovan McNabb came into the NFL in 1999 to boos from the Philadelphia Eagles fans, who wanted Ricky Williams. Meanwhile, here in D.C., we should have been the one's booing, because the position was rarely settled since Daniel Snyder bought the team. 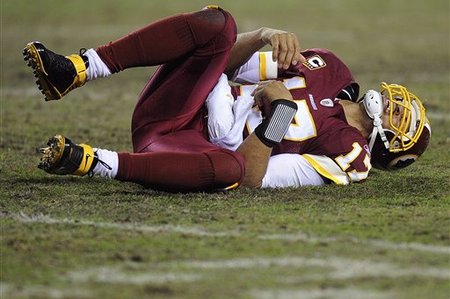 Here's a quick summary of the status of the quarterback position for this team since 1999.

Yikes. And even the bottom is misleading, because while Campbell made every start the past two years, his time under center was never settled, and he clearly was never the a front office favorite. Mark Brunell was Joe Gibbs' favorite QB, but despite a playoff appearance in year two, he was never up to his Jacksonville form. During the Steve Spurrier era ... well ... he had funny quotes at least. And did Marty Schottenheimer even play with a QB? Norv Turner had Brad Johnson playing at a Pro Bowl level, but the owner liked Jeff George.

But now, the Redskins can insert a six-time Pro Bowler. Sure, many Eagles fans blame their lack of Super Bowl titles on him, but let me remind everyone how many Super Bowls Philadelphia won without McNabb. (Wait for it). ZERO. (Bonus question ... how many Super Bowls did Ron Jaworski win? Zero). 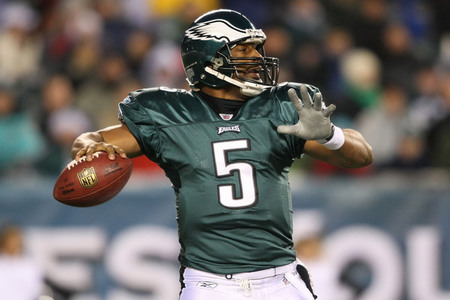 If it sounds like I take the Philly/McNabb bashing a little personally, there is a good reason. You see, I spend a great deal of time around Eagle fans (married into a Philly Sports family). While I've watched a Redskins' franchise that has been closer to "Ringling Brothers" for the past decade than a real NFL franchise, I have also watched, listenend and argued with the in-laws about the Eagles' good fortunes on the field and at the quarterback position.

Eagles fans talk about his McNabb's lack of titles, accuracy, injuries and, of course, the fact that he threw up during the Super Bowl. I like to counter with stats like second-best touchdown to interception ratio of all-time, third-best winning percentage among active QBs, four consecutive division tiles from 2001-04, four straight NFC Championship Games during that same stretch, five NFC Championship games overall and six Pro Bowls. He also won without a running game to speak of, and nobody got more out less at the wide receiver position. He had just two really good receivers over his Philly tenure: Terrell Owens (short lived) and DeSean Jackson, who just got there. I mean, he went to the NFC Championship Game with Todd Stinkston, James Trash and Freddie (EX) Mitchell!! Plus, for good measure, I like to point out at least their team is relevant for something besides being the "off-season" champs every year.

But none of it mattered, because of that number again: the zero Super Bowl Championships. Oh, and of course, the throwing up thing. Eagles fans are fixated on the vomit, for some reason. But honestly, raise your hand if you would trade the Skins' last decade for the Eagles'? I hope your hands are all up.

There is no arguing McNabb will start this season again with the "most accomplished quarterback playing without a Super Bowl Championship" label. However, this is not the NBA, because there are 10 other guys on the field. There is also a pretty impressive list of all-time greats that never won the big one, including Hall of Famers Dan Marino, Warren Moon, Jim Kelly, Dan Fouts, Fran Tarkenton and, last but not least, Sonny Jurgenson.

Jurgenson is arguably the most beloved former Redskin of all time, and he too lived and breathed the scrutiny in Philly before being dealt to D.C. If McNabb feels just half the love Sonny has, his time in D.C. will be memorable. Maybe getting away from Philly will make the Eagles faithful realize what they lost. Then again, who really cares about the IGGLES Fans? (On a side note, how GREAT would it be if McNabb brings a fourth Super Bowl Championship to D.C.? That would absolutely kill the Philly faithful!) 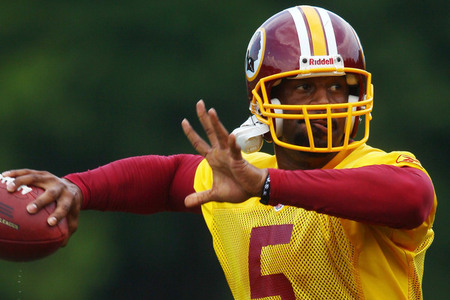 McNabb's future is now with the Redskins, and, yes, there are questions to be asked. Does he have enough left to give the Redskins a shot at success? Do the Redskins have enough talent around him? If they don't, can Bruce Allen and Mike Shanahan get it around him before his time is up? These are all fair questions.

But the bottom line is that none of them are Day One worthy. Because for the first time in a long time, the Redskins have the question answered at quarterback.