Santana Moss Has Something To Prove In 2010

Many believe Santana Moss is no longer able to compete in the NFL as a number one receiver. Here's why you shouldn't count him out.

Share All sharing options for: Santana Moss Has Something To Prove In 2010

Forgive the chip on the shoulder of Washington Redskins wide receiver Santana Moss. In light of all the criticism he has recently faced, the record-setting flanker can't help but feel he still has something to prove.

Moss has long been the only wide receiver in Washington to strike fear into opposing secondaries with his speed and gamebreaking abilities, but he's never been given the respect he deserves.

We've heard it all offseason from the fans and media:

"Santana has lost a step."

"He isn't a true number one receiver."

"He wouldn't even be a number two on a lot of teams."

"He would be better off in the slot.'

Now, the pint-sized dynamo has a full slate of 16 games to silence the doubters. And a Pro Bowl quarterback to go with said games. 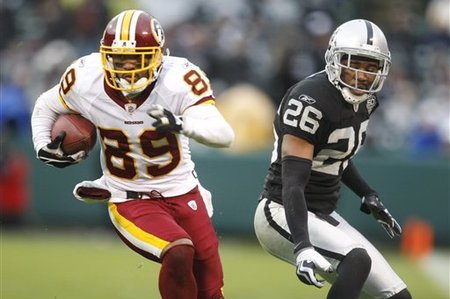 I have never understood why Moss has been so undervalued during his time with the Redskins. Granted, he might be better off playing second fiddle to a bigger possession receiver, but there is no denying his explosive capabilities.

Those numbers aren't elite if you compare them to some of the other top receivers in the game over the past five seasons, but take into consideration these factors.

Due to the lack of a secondary option at receiver, Moss has been subject to double teams ever since his breakout 2005 season, where he caught 84 passes for 1,483 yards and nine TDs.

Unlike Randy Moss or Larry Fitzgerald, Santana has never had a Wes Welker or Anquan Boldin to prevent a safety from shading over to his side. Furthermore, he doesn't possess the size of either of those players, making it even more difficult for him to create his own mismatches.

Despite this, Moss has managed to snag 349 receptions for 5,027 yards and 27 touchdowns the past five seasons. That's a hair under 70 catches and just above 1,000 yards a season. Nothing to sneer at. The reception total is a little low, but Moss' 14.4 yards per catch makes up for it. He's a big play receiver, not a possession guy. You could certainly say that Moss would be at least a terrific number two option on most teams. At his best, he's certainly a viable number one wideout.

Just think about how he compares to the following:

All of these receivers have more catches than Moss except for TO (He missed half of the 2005 season in Philly), but Moss has more yards than both Ward and Houshmandzadeh and a higher average than Ward, Houshmandzadeh and Driver. Moss trails all but Driver in touchdowns.

(I left out Andre Johnson, Steve Smith, Anquan Boldin, Reggie Wayne, Randy Moss, and Fitzgerald because those guys are all head and shoulders above anyone in this group. Plaxico Burress would have had comparable numbers if he was still in the league).

I might add that many of these top receivers have had the luxury of playing with a trusty sidekick. Moss has been teamed up with the likes of Brandon Lloyd, David Patten and Antwaan Randle El, hardly legitimate complements. Is it his fault that the front office never made a genuine effort to find real help for him?

Just how poor has Moss' supporting cast of receivers been? In Moss' 2005 record-breaking year, the second best receiver on the team was Patten who pulled in 22 passes for 217 yards. Lloyd spent two years in Washington and caught only 25 passes. Ouch.

Overall, the second best receiver (Patten and then Randle El from 2006-09) on the Redskins roster averaged 41.6 catches a season since 2005. Even worse than those numbers was that the secondary options would disappear routinely in games. Opposing defenses did not have to be concerned with them, and as a result, Moss struggled. 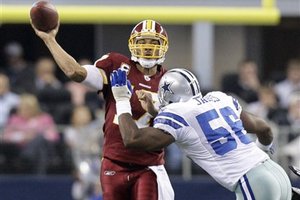 Moss has never had a great passer throwing him the ball. Mark Brunell played well with him for a year in 2005, and then gave out in 2006. Jason Campbell, who became the new starter, was never able to establish chemistry with him.

Campbell's playing style never meshed well with Moss, as the young quarterback struggled to come into his own. Poor blocking up front hurt Campbell's development in 2008, and the offense crumbled due to injuries. Moss and Chris Cooley were the only options in the passing game, and opposing defenses keyed on them for the bulk of the past three seasons.

Meanwhile, Owens played with Tony Romo and Donovan McNabb while Driver played with Brett Favre and Aaron Rodgers. Ward played with a budding Ben Roethlisberger, and Ochocinco teamed up with Houshmandzadeh in Cincinnati with Carson Palmer.

As much as I respect Jason Campbell, I'll be honest: he was never close to the caliber of any of those QBs over the past five years. Campbell learned how to become efficient, but he never emerged as a dynamic passer.

Moss' numbers took a hit in light of the double teams and inconsistent quarterbacking. He would have a game every now and then where he would post big numbers, but on the whole the Redskins struggled to get the ball into his hands.

A poor offensive gameplan combined with mediocre quarterbacks led to some rough years for Moss and the Redskins offense as a whole, but now, McNabb is in town. All Moss needs to do is ask Owens or DeSean Jackson about how great it is to play with a QB of McNabb's caliber. 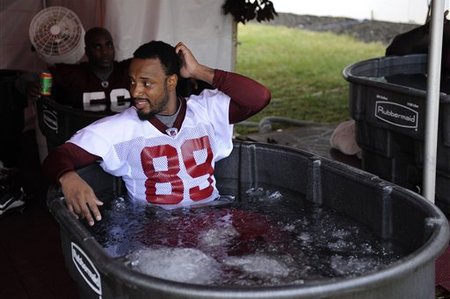 Clearly, Moss no longer has room to make excuses. The offensive line is upgraded. Chris Cooley and Fred Davis are poised to become among the best tight end duos in the NFL. Devin Thomas is expected to be a reliable number two wide receiver. Finally, the new offensive gameplan under Kyle Shanahan involves plenty of passing.

In fact, a closer examination of Shanahan's offensive scheme raises expectations for Moss to an even higher level.

Shanahan oversaw the number one ranked passing offense in the NFL last year with the Houston Texans, and accomplished this feat without possessing a bevy of weapons. Instead he had quarterback Matt Schaub use his most talented asset in Andre Johnson while spreading the ball around to his secondary targets.

The Redskins again lack a proven second option behind Moss, yet they do possess several receivers who could share the remnants of his load. If Thomas and some combination of the other receivers on the roster can provide enough assistance, Moss could post numbers akin to his record-setting 2005 season.

The Redskins have lacked an imaginative offensive scheme for years, and that has stifled Moss' impact. The offense being laid in place this year is geared towards changing this deficiency. McNabb has the tools to change the way defenses view the Redskins, and as such, Moss will benefit.

So there's loads of evidence pointing to a big season for Moss. He still has the speed and ability to take over games, and now he has a prime opportunity to prove once again that he can be a number one receiver, ending the misconception that he can no longer perform as a top receiver in the NFL.

Just make sure not to blink or you'll miss him.