Share All sharing options for: That's Not A Nice Thing To Do To A Jackie Robinson Statue

UPDATE: Apparently, the statue was broken when someone accidentally leaned on it for a photo shoot. So, no ill intent.

Either way, this is just sad. Back on April 16, the Nationals, along with many other teams, honored Robinson as part of Jackie Robinson Day. As part of their festivities, they contacted a guy named Brian Birrer, who clearly worked hard to make this statue of Robinson. Birrer came down from New Jersey to show off his statue, driving several hundred miles on his own pocket to make it happen.

And then someone broke the statue.

Here are some pictures, via Vin Scully Is My Homeboy. 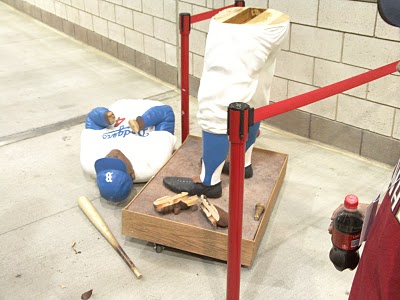 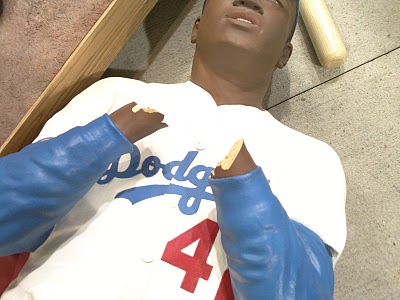 That's tons of time and effort down the drain, all because some fan (or worse, a team employee) decided it would be funny to break the statue. Worse, the Nationals themselves, according to Birrer, haven't exactly been responsive in trying to remedy the problem.

The Nationals official who turned up kept saying, "...people are taking pictures, get him out of here!"  They offered me a t-shirt for my trouble of driving the statue down from NJ at my own expense and having several thousand dollars worth of damage done to it!

When I tried to contact their legal department about their blanket insurance policy possibly covering my damage, I was totally ignored, until I contacted Marla Lerner-Tannenbaum, who had to lean on her legal people to at least call me back.  I've since given up trying to get them to do anything for me because they've made it painfully obvious that I will get nothing but the run-around.

Well, that's not very nice. Here's hoping there's another side to this story.