Albert Haynesworth Is The Redskins' 'Headache'

While Albert Haynesworth claims to have more than just a "headache," he continues to be a "headache" for Redskins fans.

Share All sharing options for: Albert Haynesworth Is The Redskins' 'Headache'

Wow, what a difference a week makes, huh?!  A week ago after the blowout win over the Buffalo Bills, Albert Haynesworth actually had good things to say about the 3-4. Everyone was smiling.

Fast forward eight days after the 23-3 loss to the Ravens, and you got the feeling Albert had lost that loving feeling.

What happened this week, with missing practice?: "I don't know. I got told I had 'headaches,' or whatever, and that's why I couldn't go out and practice. I think it was a little bit more than that. I guess they didn't want to disclose it."

What more did you have?: "You'll have to ask them, but I'll guess they'll tell you 'headaches' again."

So it wasn't headaches?: "It was part of it, but it wasn't all of it. They left out a whole lot of stuff."

What other symptoms did you have?: "You ask them."

Why would they intentionally mislead people?: "I don't know. I guess to make themselves look good, make me look bad for not going to their offseason conditioning program, but I mean next year I'm not coming either. I'm going to be with my trainer again and I'll get back in the same shape I am and feel good about myself."

Did I mention I have a "headache" when it comes to this topic?

Sure it has filled many hours of "air time" for me, and yes a previous column, but child, please. I too am tired of this "headache." 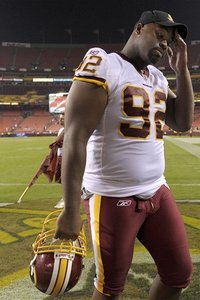 Anyway, back to the ailment that is more than "headaches." On his way to his car Albert did tell Mike Wise a little more about his symptoms.

"They act like I had a headache," Haynesworth said, on his way to the team parking lot after the Ravens and Redskins game Saturday night. "It was a lot more than that. I got out of a hot tub. I was dizzy. I threw up."

Anyway Sunday news spread that Haynesworth was not actually expecting but in fact suffering from a condition called, rhabdomyolysis.

So what is it? Rick Maese and Jason Reid actually talked to a doctor to find out more.

"Rhabdomyolysis is basically a condition in which you have extensive muscle breakdown," said Dr. Lynne P. Yao, chairman-elect of the National Kidney Foundation. "It doesn't happen as often in well-conditioned athletes, but if there's really extreme circumstances -- like extremely hot weather -- than that could happen. when you have large amounts of muscle breakdown."

Interesting part of the quote is "it doesn't happen as often in well-conditioned athletes." It all seems to come back to the conditioning or lack of with the team's highest-paid defensive player.

This latest episode is not going to change the way Mike Shanahan goes about his business. For those of you that have a "headache" because of this drama, don't look for the coach to suddenly vault Albert up the depth chart.  Via AOL Fanhouse.

"One thing for sure that is clear to me is that Albert has gotten away in the past with playing without practicing,'' Shanahan said. "That will not happen under this regime. If he's going to play, he's going to practice, and that is the same with every player here. The days of him playing without practicing are over. And that, to me, says it all.''

It would have been cool if Shanahan had coached Allen Iverson: "We are talking about practice man."

And as far as the condition that Haynesworth is reported to possibly have -- rhabdomyolysis -- that concerns muscle fiber damage? Shanahan said: "Not aware of that.''

Sources within the team said that Haynesworth complained of dizziness and headaches last week and was asked if he was dehydrated. He said no, but tests revealed he actually was dehydrated. When he was told he would not play in the Ravens preseason game without practice, the headaches eventually "disappeared,'' a Redskins coach said.

So while the two sides debate who knew what, the rest of us are ready for this "headache" to go away. But Mike Shanahan is not grabbing the pain reliever. The coach did not win two Super Bowls by being soft or allowing guys to take shortcuts. For him, it is part of coaching. Is it really so wrong to want your HIGHEST-paid player to fall in line?  Why should he get a free pass when everyone else was busting their buts in OTA's. Some guys like Carlos Rogers and Rocky McIntosh did so without contracts.

Things can change quickly in football, but right now it does not appear the Redskins have a lot of teams beating down their door to trade for Haynesworth. Cutting him would be the easy way out, and clearly Shanahan is not about to go easy on Big Al. So what is the prescription for this "headache?"

Shanahan said that he will continue to work to get the best from Haynesworth.

"We know what type of talent he is,'' Shanahan said to AOL Fanhouse. "We will keep looking for that.'' 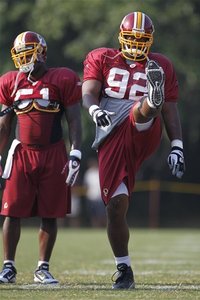 For those that fear that Shanahan's tactics may wear thin in the locker room, think again. Rick Maese and Jason Reid had a couple players share their thoughts on the on-going battle between Haynesworth and Shanahan.

One defensive veteran aware of Haynesworth's condition said he understood why Haynesworth was upset, but also sided with Shanahan in saying that Shanahan would never reveal details about any player's medical condition to the media.

Another defensive player tired of the conflict said he could not understand why Haynesworth seemed to be upset. It is common knowledge within the locker room that the Redskins plan for Haynesworth to start at right defensive end, his desired position in the team's new 3-4 scheme, and it just doesn't make sense for Haynesworth to continue to poke Shanahan, the player said.

Nothing Haynesworth has done since his introductory press conference with the team has made sense. He has become a target of fans and media and also other players around the league, such as Arizona's Darnell Dockett.

Sometimes I wonder if pro athletes are thankful for a chance to be a pro! Some be lazy, selfish and I hate to see waisted talent!less than a minute ago via ÜberTwitter

This was retweeted by a couple of Redskins players, who apparently thought it was a shot at their teammate.

Look, whether Haynesworth is sick or not, it's just hard to side with a guy that was out of shape and disinterested most of last season, then skipped all the OTAs after getting a $21 million bonus in his bank account because he didn't want to play nose tackle. Now, he's complaining about suffering from more than just "headaches." Maybe he is, and maybe the Redskins were not so forthcoming about his rhabdomyolysis.

Mike Shanahan appears to have a low tolerance for "headaches," and Big Al appears unwilling to change. Clearly, this saga will continue until the "headache" tries to fall in line or Shanahan decides the "headache" is more of a "hemorrhoid" and has it removed.