Redskins Are Made For HBO's 'Hard Knocks'

Sure, the New York Jets are featured on HBO's award-winning show, "Hard Knocks," but if ever there was a made-for-television football team, it's the 2010 Washington Redskins.

Share All sharing options for: Redskins Are Made For HBO's 'Hard Knocks'

With the Washington Redskins preparing to take on the New York Jets this Friday night, I couldn’t help but wish that these two franchises could magically change places.

I know what you’re thinking – the Jets came within one win of the Super Bowl a year ago while the Redskins went just 4-12. Of course I’d want to see the teams flip flop.

But that’s not what I meant. You see, the Jets are the featured team on "Hard Knocks," HBO’s popular reality sports documentary series. For those not familiar, the show gives fans an inside peek at the life of a football franchise, whether it's through the eyes of an undrafted rookie free agent hoping to earn a roster spot or a sage veteran trying to extend his career one more year.

I admit that the Jets were an easy choice for HBO. They’ve got more intriguing storylines than anything you’ve ever seen on "Entourage." Just to name a few:

Seriously, the Jets were a no brainer for "Hard Knocks." I fully admit it. 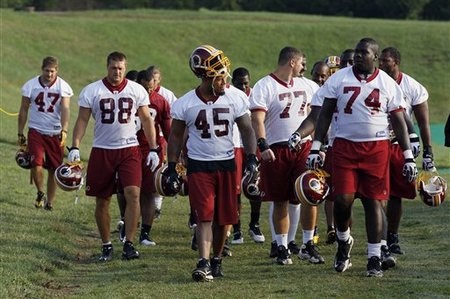 It’s too bad though. If ever there was a year for the Redskins to be featured on the Emmy-award winning program, it’s this one.

Now, before you get your hopes up, I’ve asked folks inside the building at Redskins Park what it would take for the franchise to agree to be a part of the show, and universally, I’ve been told it won’t happen. Maybe that changes one day down the road, but for now, we’re left to ponder what would have been.

Think about it. The series begins by showing just how dire last season was with a series of quick shots illustrating the Redskins’ on-the-field self destruction (or, honestly, HBO could just show the "swinging gate" fake field goal attempt against the Giants to perfectly capture how inept the Jim Zorn era was). Then, they can show key players like Chris Cooley, Clinton Portis and Ladell Betts dropping like flies due to injuries and close the scene with ‘Skins fans protesting in their anti-owner apparel.

Any good storyteller knows you’ve got to tear them down before you build them back up. At that point, football fans across the land would pity us the same way we all embraced the Cincinnati Bengals on last season’s "Hard Knocks."

From there, we see Bruce Allen, Mike Shanahan and Donovan McNabb coming to town to save the day while instantly restoring hope to a once-proud franchise. After that, the right cast of characters are in place.

There’s the laundry list of aging veterans and castoffs, like Joey Galloway, Bobby Wade, Roydell Williams, Adam Carriker, Maake Kemoeatu and so on creating the oldest roster in football.

There’s the next wave of young talent – represented by Brian Orakpo, Fred Davis and Kareem Moore. You’ve also got no-namers like Anthony Armstrong and Brandon Banks hoping to impress the coaching staff enough to take a chance on an unproven player.

And, of course, let’s not forget the stable of big-name running backs – namely, Portis, Larry Johnson, Willie Parker – motivated to prove that each player still has something left in the tank at this point in their respective careers. 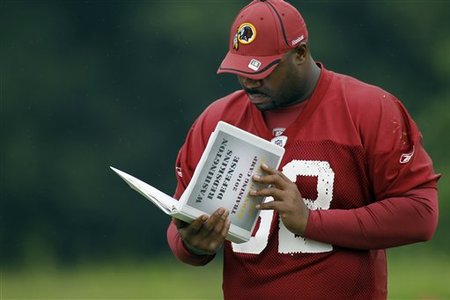 And then there’s Albert Haynesworth.

Seriously, HBO could dedicate the entire series to Fat Albert’s drama this offseason. Having cameramen on site for the series of conditioning tests alone would shatter the ratings record for "Hard Knocks." HBO could make it pay-per-view and I’d still shell out 40 bucks to see how many times Shanahan had to pause the stopwatch to ensure Haynesworth finally passed the test.

(And, for the record, I’d happily pay double that just to see Selvish Capers’ impression of Haynesworth during the rookie skits).

In reality, the ninth-year pro wouldn’t even have to open his mouth. All he’d have to do is stand around with his perpetual scowl and HBO would have their best villain since Marlo Stanfield.

Sure, his teammates are tired of the nonstop attention given to the disgruntled defensive lineman, but the entire situation has that car-wreck appeal. You want to look away, but you simply can’t. With as much camera time as "Hard Knocks" has spent this season on the formerly relevant Kris Jenkins, one can only imagine how many cameras would be locked on Haynesworth every time he had a "headache" or needed to take a knee because he was winded.

The storylines out of Redskins Park are so juicy these days that fans are even spending time trying to read between the lines to figure out what led to the firing of the team’s former executive director of communications this past weekend. When Peter King, Chris Mortensen and countless other talking heads from across the country are lining up to chime in about a public relations guy being let go, you know you’ve got the nation’s attention. It doesn’t even matter if the Redskins take the field – Devin Thomas calls this place "Drama City" for a reason. 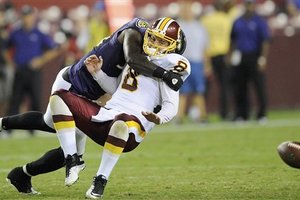 But alas, it will never be. Unless the big wigs in Ashburn have a change of heart, we’re left watching the Jets, Bengals and even the hated Dallas Cowboys on "Hard Knocks." It’s too bad.

After last weekend’s game against Baltimore, I asked Armstrong how he was planning to maximize his one chance to make a cameo on HBO. The mere thought brought a smile to his face, even after suffering through a 20-point loss at home.

"Yeah, we’re going to be taking on the Jets next week, so we might be on ‘Hard Knocks,’" he said with a laugh. "You’ve got to find out whose mic’ed up. Maybe I’ll just stand next to Bart Scott. I know he’s always on there talking, so I’ll just try to stand near him."

For now, that’s the closest we’ll come to seeing the burgundy and gold on HBO. Here’s hoping they make the most out of their 15 minutes of fame on cable television and capture the hearts and minds of America.

If there’s enough buzz, maybe the decision makers at Redskins Park cave in and welcome "Hard Knocks" with open arms next season. And, if nothing else, the Redskins’ drama has to be more watchable than "John from Cincinnati" or "Carnivale."