The Importance Of JaVale McGee

Sure, the Wizards have their franchise player in John Wall. But if the Wizards are ever going to contend with the Miamis and Orlandos of the world, they can't afford to have JaVale McGee fall short of his potential.

Share All sharing options for: The Importance Of JaVale McGee

In the NBA, drafting a big man is like drafting a quarterback. No matter how many how many drills you run a prospect through, how many hours of film you study and how much psychoanalysis you do, there's a good shot that the player you draft will go bust. And that's strictly with the cream of the crop. For every Shaquille O'Neal, there's a Kwame Brown. For every Dirk Nowitzki out there, there's a Darko Milicic.

In today's NBA, big men aren't necessarily the most important commodity, but they're still the rarest. Kobe Bryant was the best player on the Lakers last season, but we all saw how well he fared after Shaq left and before Pau Gasol arrived. That's why teams line up to draft big men every year, despite the high level of risk. 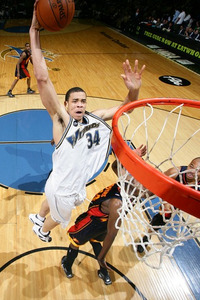 In 2008, the Wizards took the plunge with JaVale McGee, and so far, the results have been mixed. On the one hand, he's proven that he's not a bust. He average 6.4 points, 4.1 rebounds and 1.7 blocks per game in only 16 minutes of action per game last season. Not bad for someone who doesn't turn 23 until January.

On the other hand, there is still a lot that needs to be learned, mostly in areas that don't show up in the stat sheet. Most stat sheets don't keep track of biting on a pump fake or being out of position on defense. Nor do they adequately reflect just how clumsy some of his mistakes are on the offensive end. And there are some areas where he struggles that do show up on the stat sheet too (averaging .2 assists per game while turning the ball over .9 times a game is a bad, bad trend).

Nitpicking aside, drafting McGee was a positive for this team. Anytime you can get any sort of value from drafting a big man, it's a win for the franchise, and many of the flaws in his came can be overcome with time. But as McGee prepares for his third season, the team has to do everything they can to best out of JaVale so they can get the best out of their franchise player, John Wall.

Obviously, with Wall, the Wizards are going to be playing lots of up-tempo basketball, which means the Wizards will continually be on the lookout for players who give him options on the break. With McGee already in tow, they don't have to worry about finding a center who doesn't mind running, especially now that he knows how to deal with his asthma. On offense, especially when Wall has the ball in his hands in the open court, McGee couldn't be a much better fit.

The issue that will hold any John Wall-led team back is McGee's struggles at defending the paint. Yes, he's a good shot blocker, but that doesn't paint the whole picture. Even though he led the Wizards in blocks, the Wizards gave up less points per 100 possessions with McGee off the court than they did when he was in the game.

The explanation behind this is simple. Although McGee is a solid shot-blocker, too many times he gets caught up in going for the block and he ends up sacrificing points. Players can either slide around McGee once they get him to bite for a pump fake, or they can hit the open man in the paint that McGee has left uncovered while pursuing a block. He's not exactly the strongest center in the NBA either, which makes it hard for McGee to keep opposing centers from getting the ball in positions where it's easy for them to score. 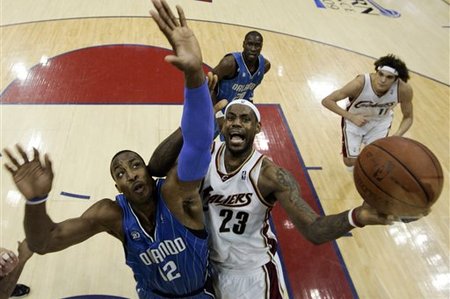 These weaknesses will only be compounded as the Wizards begin to challenge the Eastern Conference elite in a few years. Once they're ready to compete with the Heat and Magic, McGee will have to be able to improve on these holes in his defensive game in order to give those teams a run for their money.

Dwight Howard will eat JaVale McGee alive and create more opportunities for his sharpshooting teammates if JaVale can't keep Howard from getting to his spots. Kendrick Perkins did a masterful job keeping Dwight Howard from getting where he wanted to in the Eastern Conference Finals last season, which enabled the Celtics to set the tone early in that series and keep Howard from having his usual impact. Though McGee doesn't have the body type to be quite as effective in that role as Perkins, he must find a way to do enough to disrupt Howard's game if the Wizards want to have any shot against the Magic in the coming years.

Likewise, McGee should study Dwight Howard's blueprint on keeping LeBron James and Dwyane Wade from creating their usual havoc, if he wants to give the Wizards a chance against Miami's juggernaut. Though Howard doesn't guard either James or Wade one-on-one, his ability to keep Wade and James from scoring effectively in the paint makes him the most effective defender against either player. There isn't a perimeter defender in the league who can truly shut down an elite perimeter player like James or Wade by themselves. The only way to effectively limit them is to make them ineffective where they score the most. Howard forces more shots to go awry than anyone else in the NBA, and that's how the Magic have been able to enjoy so much success against the Cavaliers and Heat over the years. (Howard is 5-3 against Wade over the last two years and 8-5 against James, including their meeting in the 2009 Eastern Conference Finals).

Asking JaVale McGee to emulate the best parts of Dwight Howard and Kendrick Perkins' games is a tall order, no doubt about it. But playing in the same division with the Magic and the Heat is a tall order in and of itself, so there's no point in avoiding difficult challenges. JaVale has already come a long way in his short time in the NBA, and he should be given a lot of credit for making it as far as he has in such a short time. But in order for the Wizards to become serious contenders in a division stacked with two of the top teams in the NBA, McGee has to expand his defensive game to more than just shot-blocking in order to slay the Goliaths in Florida. 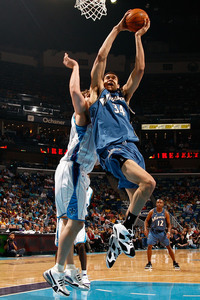