Once Again, The Mystics Must Defy The Script

Game 1 of the WNBA Playoffs didn't exactly go as expected for the Washington Mystics. Then again, has anything this season actually gone as we all expected?

Share All sharing options for: Once Again, The Mystics Must Defy The Script

WASHINGTON D.C. - I won't lie: as I walked into the Verizon Center for my first in-person Mystics game of the 2010 season, I had a script in my head of how everything was going to unfold.

First things first: I pictured a Mystics win. They were on a roll, and the Atlanta Dream were not. But more specifically, I pictured a game where the Mystics, energized by their crowd, would jump on the Dream early and close them out late with their typical suffocating defense. I pictured a big game for star center Crystal Langhorne and a strong performance from Most Improved Player hopeful Monique Currie. I pictured the kind of performance where the Mystics would announce their arrival as a legitimate title contender to those who haven't been paying attention.

Of course, that's not what ended up happening. Ultimately, the Mystics fell behind early and never caught up in a 95-90 loss. Their defense, normally outstanding, was awful, and neither Langhorne or (especially) Currie asserted themselves. After it was over, coach Julie Plank pretty much summed up the entire game in one coach-speak line.

"You can't give up 95 points. I don't care if it's regular season, and definitely not in the playoffs," she said. "It's disappointing because we're such a great defensive team."

That great defensive team took the court most of the season, but they didn't take the court last night. Now, facing the daunting task of winning an elimination game on the road, the Mystics will once again have to defy the script. 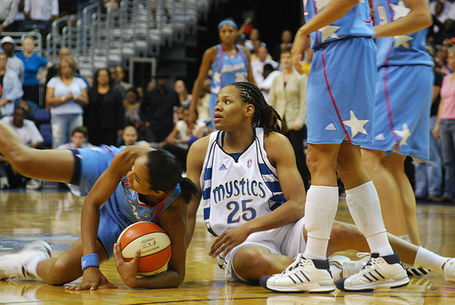 Against all odds, the team thrived this season, riding a hot start and a hot finish all the way to the top of the Eastern Conference. Despite playing the entire season without all-star Alana Beard, the Mystics got enough scoring, and their defense emerged as the WNBA's best. Most importantly, several players admitted they played the entire season with a different sense of urgency, whether it was motivation to prove the doubters wrong or simply because they wanted to set themselves up as well as possible in the playoffs.

In retrospect, perhaps the motivation was as much due to the second point as the first. Center Chasity Melvin, for example, freely admitted before the game that the Mystics, more than most teams, felt they desperately needed the home-court advantage that comes with being the number one seed.

But as the Mystics found out last night, having home-court advantage means relinquishing the underdog card that carried them through the season. The crowd was in place, loud and boisterous, but the team didn't respond to it. They looked tentative right from the start, thinking instead of playing, overwhelmed by the moment instead of channeling the energy into their play. Maybe it was the crowd, or maybe, it was simply the fact that the playoffs are a different game from the regular season. Regardless, the Mystics did something they didn't do much all season. They played not to lose, rather than using whatever motivational energy they possessed to jump on their opponent.

"They came out and punched first, and we kind of got knocked back," Lindsay Harding admitted. "That's kind of what we do, so we were caught off guard." 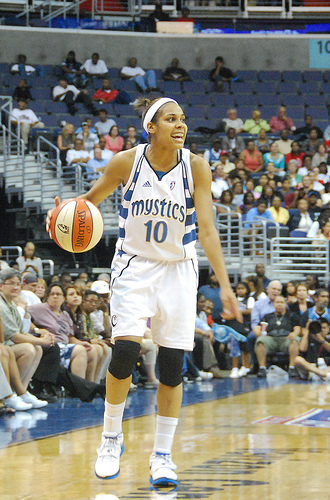 It didn't help that the Dream had a curveball of their own up their sleeve. After the Mystics embarrassed them on their home court in the final game of the season, the Dream decided to make a lineup change, inserting guard Coco Miller for forward Ericka DeSouza. Atlanta therefore essentially started four guards, and that forced the Mystics into some mismatches they weren't ready to exploit. The Dream got to the basket through dribble penetration and punished the Mystics in transition, often simply with coast-to-coast drives.

"We didn't do a good job figuring out how to attack and take advantage of that mismatch," Currie said. "Defensively, our post players aren't used to finding guards out on the wings."

Offensively, the Dream went at Langhorne, exploiting her in as many pick and rolls as possible. They spaced the floor with shooters, preventing the Mystics from providing enough help on the rolling big. They also rebounded and ran, often without even using an outlet pass. Defensively, they fronted Langhorne, switched every pick and roll and didn't give Currie an inch of room. From the start, the Mystics were reacting, not acting.

"When they were playing four smalls, we were looking so much at the mismatches on the bigs that we were trying to force it so much there instead of just passing it around," Harding said. "Sometimes, you know what, you try, and the mismatch just isn't there.  We just have to learn to take what's there."

When you consider that the Mystics were already facing an unfamiliar situation as the favorite in a big playoff series, Atlanta's lineup adjustment was a stroke of genius. Any apprehension the Mystics had going into the game already was magnified by the unfamiliarity of their opponent. 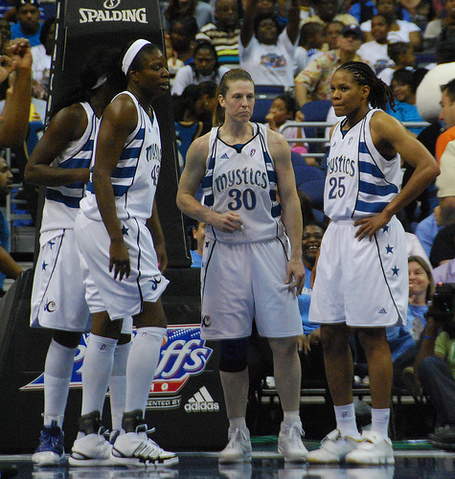 So here we are again, with the Mystics being counted out. In the WNBA's playoff format, one bad game can be deadly. The Mystics have absolutely no margin for error, because one more loss ends their season. They have to go into Atlanta and win, then come back home and win again just to make it to the next round.

Now, the "script" says that last night's loss will ultimately doom the Mystics' once-promising season. But thus far, the "script" is 0-4 this season. Nothing, whether it was the season as a whole or last night, has gone according to plan with this team. Now that they're back in their familiar role as underdog, who's to say the Mystics can't defy the "script" again and rally to win this series?

Based on the way this season has gone, that would only make sense.