Despite Being Out Of Contention, September Games Matter For The Nationals

Individual baseball games don't matter, but they do shape a season. What happens in these next few games determines whether the Nationals' 2010 season is terrible or just plain ol' bad.

Share All sharing options for: Despite Being Out Of Contention, September Games Matter For The Nationals

With the whole Rob Dibble brouhaha swirling, one of the refrains spouted by his defenders is that the obsession with the tattooed meathead is a distraction. What's going on between the lines, they say, is far more important than what's being said 300 feet above it. It's a valid point.

But at the same time, as has been the case for the last half-decade, the season feels too damn long. The Nats are slogging along, playing listless ball in games that mean pretty much zippo. The games don't matter for anything other than the sheer, pure joy of having a baseball game on TV or the radio as the unbearably hot summer nights turn cooler.

Baseball's a funny game in that it's far too easy to get wrapped up in individual games as if they matter. Sure, Jason Marquis was amazing last night, but it doesn't mean he hasn't been bad for most of the season. As we experience each day, we rise and fall with those emotions. Yet, it's only when you step back, looking at the season as a whole, putting things into perspective that you can really get a feel for how things went.

So with September looming, these next few weeks are going to decide what shape this season has. Each games means little, yet they add up to a lot. And maybe it's the recent run of poor performance, but it feels like this season's about to slip away. 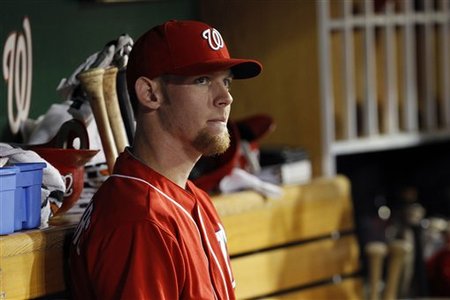 Start with the ace. Stephen Strasburg's set to have a second MRI on his aching forearm. The ghost of former ace John Patterson looms -- "Wet MRI" and "flexor tendon" ring alarm bells in any Nats' fans head. If the worst happens, and doctors take a ligament from his leg or ankle to be installed in his arm, it's a lost season ... or more.

Look at the first baseman. Everyone loves Adam Dunn's power. But plenty don't like his defense. And, despite both sides talking about how much they want to have a deal done, he's still unsigned with free agency looming. Might some team throw $70 million over five years to turn him into one of the league's most productive Designated Hitters?

How about the left fielder? Josh Willingham's solid season is lost to a knee injury that destroyed his would-be career year. He's coming back. But he'll be a year older. He'll be a bunch more expensive. He'll have battled back from knee and back injuries over the last few years. Is that really a core guy?

And in center? Is Nyjer Morgan the answer? How will his seven-game suspension affect Mike "Character Counts" Rizzo? Not to mention his poor play, his indifferent defense or his on-field tantrum?

What about on the farm? Who's ready to contribute? The team dipped down into the farm and brought up Justin Maxwell and (wait for it) Kevin Mench. Where's the extra help going to come from?

There are a lot of dark clouds swirling now after a season that started off with faint notions of competing. Back in April, it really looked like they were on the verge of making a leap forward.

Now? It's not hard to see it all teetering down next year. Strasbug? Out. Dunn? In Chicago. Willingham? Hobbling around the outfield lamely. Morgan? On the bench. And in a few years, Ryan Zimmerman's going to be in pinstripes.

Yes, that's a pessimistic take. But that's where the current shape of the season leads us. Down. Down. Down. 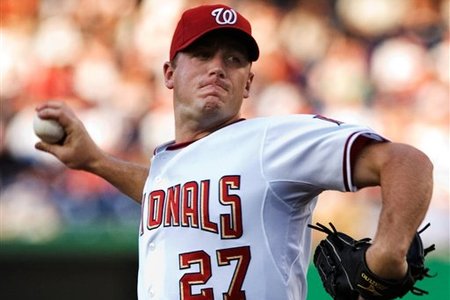 But that's also why these next few weeks are so critical. With Zimmermann back, and a seemingly rejuvenated Marquis, will the pitching stabilize? Will Roger Bernadina and Ian Desmond ink their names in next year's lineups with strong performances?

If the September answers to those questions are "yes," then the pessimistic take on the season goes away. And if they're "no," we're looking at another 100 losses and yet another lost season -- our fifth in a row.