Redskins Walk A Fine Line With Donovan McNabb At The Helm

Donovan McNabb brings excitement, but his oft-injured past could emerge in D.C. to haunt the Redskins. The team must do everything possible to keep him healthy.

Share All sharing options for: Redskins Walk A Fine Line With Donovan McNabb At The Helm

We learned plenty about Donovan McNabb last week in the Redskins' 23-3 loss to the Baltimore Ravens. Some of it was downright terrifying.

But a lot of it was good. McNabb's pedestrian stat line of 11-26 for 206 yards and a pick didn't tell the whole story. His interception was a dreadfully underthrown ball that really ruined an otherwise decent night, but there were also several plays that gave us a little taste of what a Pro Bowl quarterback can do for a passing offense.

We knew coming into the year McNabb has a big arm. We saw it firsthand against Baltimore, and man did it look sweet. Midway through the second quarter, he dropped back and found Santana Moss downfield on a post route. It was a beautiful pass for 23 yards, but what really distinguished it was that McNabb squeezed the ball into a small area in coverage.

Again, take into account a drive late in the first half where McNabb found Moss on consecutive occasions over the middle before being taken down. The blocking up front broke down badly on both plays, yet McNabb progressed through his reads to Moss underneath, getting the receiver the ball with a defender draped over him each time.

Name me a quarterback who could have made those throws the past ten years in Washington. That's right, you can't. 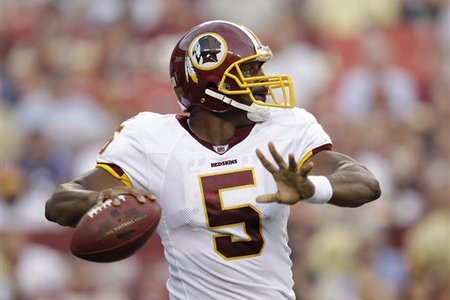 McNabb is the biggest, strongest, and the most athletic quarterback the Redskins have had in years. He may struggle with his accuracy, but he makes up for it by making key throws and thriving under defensive pressure. He takes risks that often pay off because he trusts his arm to make tough throws, like the aforementioned post route to Moss. Defenses have to honor that playmaking ability or they will pay.

I know we will see our fair share of one-hopped slants to receivers, but it really doesn't matter when McNabb can come back the next play and thread the needle downfield. Teams will respect his abilities and that automatically gives Washington an improved offense.

Center Casey Rabach, the elder statesman on the offensive line, knows that the addition of McNabb means the world to a long-struggling offense.

"Donovan, first and foremost, [is] a proven winner in this league and that just makes everybody's confidence level go up," Rabach said. "Everybody just wants to play at a higher level to kind of match his level."

And they are already. After the game last week, McNabb credited Moss and tight end Chris Cooley with making the most of his passes.

"In this game we play, you want to give guys opportunities to make plays for you," McNabb said. "You give them an opportunity and they will step up and make a play ... Last week me and Cooley had a little rhythm. I thought [this week], Cooley caught two passes and then Santana was able to kind of get some things going."

We all knew the Redskins scored a huge upgrade in the acquisition of McNabb, but it's nice to see him on the field validating our excitement. The offensive gameplan will be more creative, more aggressive and more explosive with McNabb under center because he brings so many tools to the table.

"He's very smart, very professional guy and he plays really hard," receiver Bobby Wade said. "He finds a way to humble himself everytime he comes out on the football field just to get better." 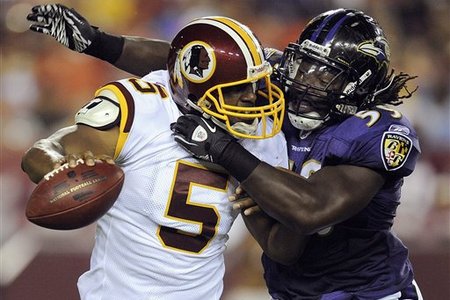 But there are also clouds on the horizon. McNabb received that dose of humility when he emerged from the locker room for the start of the second half against Baltimore with his ankle heavily taped. Mike Shanahan is not expected to play McNabb in the preseason again; a good move given his recent durability issues.

However, sitting out the final two weeks of preseason will cost McNabb valuable time learning the offense in both practice and game situations. After all, he is still new to Kyle Shanahan's scheme, and the missed time will slow the team's growth offensively.

Taking into account his track record, it is easy to assume McNabb will explode off the blocks, but if he hasn't completely grasped the offense and established chemistry with his receivers, there will be extra hurdles to clear. His injury might cause some problems early in the season. Then again, as much as McNabb needs reps in the preseason, the Redskins realize that as a veteran with an injury history, he needs the rest even more. He's been around the block and experienced countless scenarios on the football field. Washington doesn't have to concern itself with his understanding of the offense to the extent they would with a younger player like Jason Campbell.

Redskins' fans will doubtless be holding their breath each time McNabb is brought down this season, and with good reason. He is a battle-tested warrior, but with that hardened experience comes scars. McNabb's body can no longer match his happy-go-lucky personality. The devil-may-care grin won't stick around forever if he gets hit too hard and too often.

Thus, the primary objective is to keep McNabb healthy; plain and simple. The success of this team rides figuratively on his shoulders and literally on his knees. Protect him, and he'll showcase that cannon of an arm for years to come. Fail in that endeavor, and it's back to same drawing board these Redskins have been at for over a decade.