Larry Johnson Pays Tribute To Madden ... With His Shoes

Share All sharing options for: Larry Johnson Pays Tribute To Madden ... With His Shoes

One of the coolest additions to the Madden NFL video game is the truck stick, which allows the offensive player to literally lower his shoulder and run through people. EA Sports put it in the game in 2006, and four years later, NFL players are paying tribute to it. 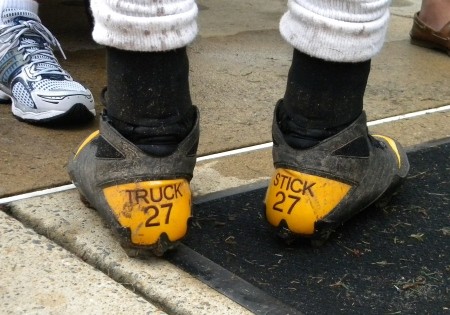 Officially, Johnson is wearing the shoes because he feels like they symbolize his style.

"When I was with Dante Hall" on the Chiefs, Johnson explained, "he was the Human Joystick 'cause he was moving fast. But I ain't got no spin, I ain't got no juke, I got nothing but straight truck stick."

But of course, there are several other phrases Johnson could use to describe his style (even though "downhill runner" doesn't roll off the tongue very well). So because he chose a Madden phrase, I will continue to believe he is paying tribute to the game just as much as he's paying tribute to himself.