What will it take for Ralph Friedgen to keep his job at Maryland beyond this year?

The Maryland Terrapins open the season next week when they face Navy at M&T Bank Stadium in Baltimore in what could the beginning of the end of the Ralph Friedgen era. As the "Fridge" enters his 10th season at his alma mater, the seat is definitely hot after the first 10-loss season in school history. To add insult to insecurity, the Terps were picked to finish last in the Atlantic Division by the ACC media.

Those aren't the only complications regarding Friedgen's future. He has a contract that expires after the 2011 season, which doesn't afford him much job security. In addition, James Franklin, the associate coach and (unofficially) coach-in-waiting, is owed $1 million if he is not named coach by 2011. Finally, there is also the matter of slipping season ticket sales that have decreased for five consecutive seasons.

So the question is, what will it take to keep Friedgen's job safe? 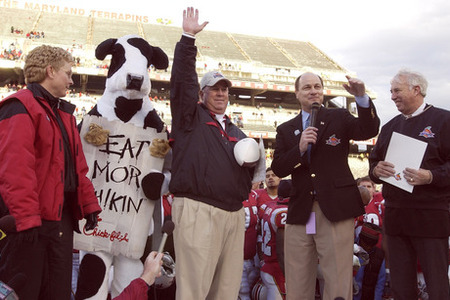 Of course, that would be a good question for an athletic director, but Maryland does not have one right now. The Washington Post has reported that then-Athletic Director Debbie Yow tried to raise funds to buy out Friedgen's contract last fall. When the money couldn't be put together, she announced he would come back and was expected to have a winning record this season. Yow has since left for the AD's job at N.C. State, which makes Friedgen's future even cloudier.

You could argue Friedgen has become a victim of his own success. He led the Terps to at least 10 wins in his first 3 seasons, and in that first season, in 2001, the Terps won the ACC for the first time since 1985. It should also be noted that before Friedgen came back to campus, the school's last bowl appearance was 1990. It's impossible to deny that Friedgen brought life to a program that had become lifeless after Bobby Ross left following the 1986 season.

However, patience is at an all-time low on campuses across the country these days. It's possible that, if it was not for the economy, Friedgen would have already been out.

Of course, before the verdict is returned on Friedgen's fate, there is a season to be played. Maryland junior wide receiver Torrey Smith said the heat on Friedgen has motivated players.

"We're playing to win in 2010, so whatever that means, take it as you want it," Smith said. "We want to change our program around to get it how it was. Coach Friedgen has all the credibility in the world. He's not doing anything differently. It's just on us to get it done."

Smith is not the only Terp to have the Fridge's back.

"At the end of the season, we had a team meeting about it," senior linebacker Alex Wujciak said, "and he told, us not to worry about him. Just go out there and play football, what we came here to do."

Asked how Friedgen, who is the program's fourth winningest coach, might respond to the criticism and speculation, Wujciak laughed.

"He'll be fine," he said. "I don't think it really bothers him at all. That's just his personality. That's just the way he is."

This is not an easy call for whoever ends up being the new Maryland AD. Consider what Friedgen and any coach at Maryland has working against them. Two NFL franchises less than an hour from campus suck up most of the media coverage and fan attention. There's a lot of talent in your own backyard, but the recruiting battles are furious with so much national competition. Penn State, one of college football's royalty, is only about four hours north of your campus. In the other direction, your good friend Frank Beamer and perennial power Virginia Tech is only about four and half hours away. And those are just two of the schools that have been able to come in and scoop up some of the best talent. Lately, North Carolina, for example, has been real successful in taking away some top area talent. (Though they have their own problems right now.)

Point being, replacing Friedgen does not necessarily fix all the problems. Maryland has some built-in issues that may be tough to overcome, and maybe -- just maybe -- what Friedgen has achieved is about as far as the program can hope to go. 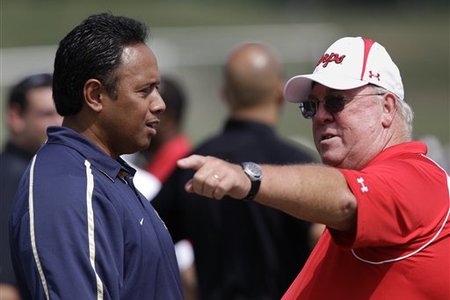 As for the here and now, one way to alleviate the "dead coach" walking talk is to get out of the gates quickly. Luckily, the Terps have a schedule that is set up for such a scenario. Labor Day will not be easy against Navy, and they do play at rival West Virginia, but they also play home games against Morgan State, Florida International and Duke. A 4-1 start is not unrealistic before the October bye week.

The Terps would then have three home games left against Wake Forest, Florida State and NC State and four road games with Clemson, Boston College, Miami and Virginia. Only Florida State and Miami are expected to be Top 25 teams, which means the Terps could find 2-3 more wins to get themselves bowl eligible and perhaps keep Friedgen around for 2011.

If it was my call, I'd keep Friedgen if he was able to steer the Terps back into the bowl season. However, the person making that decision at Maryland is still TBD, which could make this one of the most important seasons at College Park in a long time.