After ignoring the offensive line for a decade, the Redskins finally addressed the team's most glaring weakness by drafting Trent Williams fourth overall in this year's draft. Fortunately for 'Skins fans, the 22-year-old is already paying dividends.

Share All sharing options for: Trent Williams Looks Right At Home In Washington

When you root for a team often referred to as the NFL’s offseason champs, you become conditioned to splashy moves, overwhelming positivity and a constant barrage of headlines during the time of year when no actual games are played. That’s the life of Washington Redskins fans. You live and eventually, you learn to accept it.

This particular offseason has easily been the most intriguing since Joe Gibbs shocked everyone by putting his successful NASCAR career on the back burner and returning to the coaching ranks. Bruce Allen, Mike Shanahan and Donovan McNabb represent clear upgrades over Vinny Cerrato, Jim Zorn and Jason Campbell, so for that reason alone, the Redskins should be more competitive week in and week out. They might not win double digit games in 2010, but they’ll at least resemble a professionally run organization and take the field each week with a chance at victory.

For my money though, the biggest addition this offseason has to be rookie tackle Trent Williams. After a decade of ignorance by the Redskins braintrust, Allen stepped in and finally addressed the offensive line – using the fourth overall pick on the Oklahoma standout.

The move represented the first time a Redskins first rounder was used on an offensive lineman since 2000, when the team selected a tackle out of Alabama named Chris Samuels. Even though Samuels became a perennial Pro Bowler at one of the most vital positions in football, Cerrato and friends apparently didn’t feel that offensive linemen sold season tickets. So they continually focused their high draft picks on flashier positions and prayed the line held together in spite of them.

If McNabb is going to stay healthy this year, which isn’t guaranteed, he’ll need improved play from Washington’s offensive line. Getting guys like Stephon Heyer and Chad Rinehart away from the football field is a good start, but adding a bona fide talent to protect the blind side was key.

With Samuels retiring this offseason, the team was in dire need of a successor. By all accounts, they’ve found him. 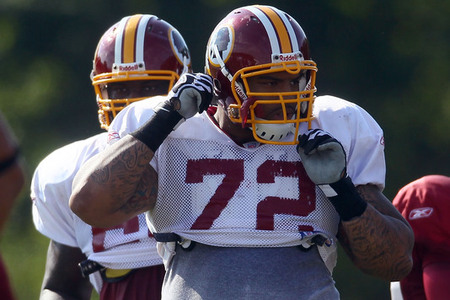 During training camp, it was readily apparent that Williams was gifted. The rookie had more natural athletic ability and agility than anyone at 6-5 and 318 lbs. should. He just needed his head to catch up with his body. Once he gets his responsibilities down in this high-powered Shanahan offense, ‘Skins fans are confident he’ll solidify the position for the foreseeable future.

But here’s the funny thing: even though Williams has fared well for much of this preseason, he’s not in a hurry to pat himself on the back. The kid is staying hungry and humble – two traits you love to see in a rookie.

"I think I did okay," Williams said after his preseason debut against the Buffalo Bills. "Nothing amazing and I can definitely do better, but I think I did okay for my first game. I thought after I got the first play over with that I would settle down, but I was still nervous the whole game."

And why is that, you ask?

"As long as McNabb is in there, I was walking on egg shells," Williams said. "He’s so vital to our franchise. We don’t want nobody to lay a finger on him."

Whether that comment was meant as a compliment towards McNabb or a shot of reality at the prospect of Rex Grossman, John Beck and Richard Bartel playing in meaningful game is for you to decide. Either way, Williams knows his job and plans on doing it to the best of his abilities.

In his second preseason game, Williams faced a much tougher opponent – noted Redskins killer Terrell Suggs. Last time we saw "T-Sizzle," he was pointing and laughing at the Redskins offensive line and openly suggesting the team get Jason Campbell some better protection before someone like him killed the poor guy.

The guy talks a lot of trash, but when it comes to the Redskins, he’s always backed it up. In Washington’s second preseason game, Williams got his first wake-up call. Suggs proved to be a challenge, McNabb got roughed up a little bit by an aggressive Ravens defense and Williams had his elbow in a sling after the game.

There was no smiling after the game and the 22-year-old was clearly down on himself. Fortunately, Williams learned from the experience and has spent considerable time since then re-watching film to see where he can improve.

"Game two wasn’t bad," he said after giving himself a few days to get over it. "After I watched film, I really did better than I thought I did. [Suggs] gets everybody though, and I kind of felt like I held it to a minimum."

And then there was the third preseason game, when the Redskins faced the New York Jets. Not only did Williams look much better, but he also dove in head first when things got heated during the first half.

"I was just taking up for my teammates, you know," Williams said. "We’re in this together."

Fellow linemate Artis Hicks and Jets linebacker Bart Scott exchanged a few choice words and a shoving match ensued. As officials tried to pacify the situation, Williams was the first Redskin in to defend his veteran teammate.

"I don’t know exactly what he said, but I know it wasn’t nice," he said with a huge grin. "I’ll just leave it at that."

No one is exactly sure how it got started, but it was a big moment in the growth of Williams. Seeing him jump in, without hesitation, to support a teammate showed he’s getting more and more comfortable in the pro game. It also shows that, for the first time in recent history, the new and improved offensive line isn’t going to let opponents push them around. 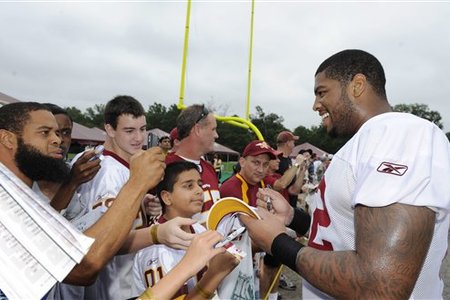 These moments might serve as early indicators to Redskins fans that Williams is legit, but like I said earlier, he’s far from satisfied.

"I don’t think I’m doing all that well," Williams said with completely sincerity after the Jets game. "I still think I have a long way to go, so I’m definitely not settling with these performances. I’m just taking this game by game, because if I don’t prepare, I could come out here and get embarrassed. I really can’t get ahead of myself."

Humble and hungry. Two big reasons why the Redskins might not have to worry about left tackle for another decade or so.