Legg Mason Tennis Classic participant John Isner is best known for his marathon match at Wimbledon earlier this year, but he's trying everything he can to be known for something else.

Share All sharing options for: John Isner Is Done Talking About Wimbledon

WASHINGTON, D.C. - John Isner has always stood out. At Georgia, he was a four time All-American, and the No. 1 singles player on a team that lost only one match his senior year en route to a national championship. He's always had the big serve ... and did I mention he's 6'9"? It's hard to miss a guy like that.

But most casual sports fans didn't know much about Isner until Wimbledon in late June, when over three days, he and Nicolas Mahut played the longest match in the history of Grand Slam tennis. Just think of all the records the match broke. 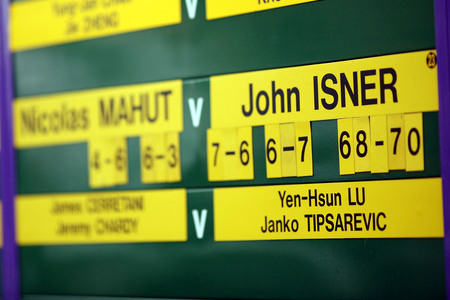 Even on a day when America played one of the most important World Cup matches in its history, most sports fans wanted to talk about this, not Landon Donovan's game winning goal against Algeria. For a brief moment (as a brief as a three-day match can be, mind you) it was the biggest story in the sport. 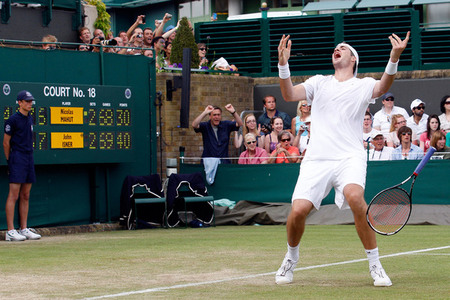 But that match didn't win him Wimbledon or even get him a spot in the final. It was an early-round match, and since Isner lost shortly thereafter, it didn't really mean anything in terms of tournament success. But it might be the most famous early round match in tennis.

Unfortunately for Isner, all the fame and opportunity that came with that match can also be a burden. To many, Isner is now "the marathon match guy," when I'm sure he would just as soon be recognized as simply, "the tennis player." The only way he can distance himself from that label is if he wins. Ask Christian Laettner about trying to live up to one huge moment that happened early in your career. If he is able to earn the "tennis player" label, than the marathon match for which he is currently known becomes merely a highlight, not the sole defining moment of his professional career.

But for right now at least, that remains the most important moment of his career, and it continues to be the only thing reporters want to talk about. At the Legg Mason Tennis Classic on Tuesday, Isner played a match that didn't start until about 11:15 p.m. He won in straight sets, but in his typical dramatic fashion, both went to a tiebreak. There were about 150 people still in that stands when the match concluded just after midnight and a press box full of reporters fighting sleep. We all migrated to the press conference area, awaiting Isner's arrival.

Earlier in the day, I requested an interview with Isner, and was asked by a PR official "You don't plan on asking him anything about Wimbledon, do you?" Well, yeah, that was kind of my game plan. I was warned that Isner was sick of talking about it, and that he would not be very responsive to any questions on the subject. Time for an audible, "How's your forehand, John?"

At about 1:15 a.m., Isner walked into the conference room, and sat on stage in front of a handful of reporters who had waited all day to talk to him. What do you suppose we wanted to talk about? The second question that was asked was about his habit of going into tiebreakers. It was relevant considering the match he just finished, but the reporter set it up with a reference to Wimbledon. Isner kind of grinned, and shook his head slightly as he said, "I don't know," before continuing with an analysis of his match, not referencing Wimbledon at all. He didn't take the bait.

Then, a few questions later, someone asked Isner how he was responding after Wimbledon, both mentally and physically, prefacing his question with, "I supppose you'll never be able to escape 70-68," like he didn't know that already. He responded, "Yeah, I'm trying to ... Mentally, I'm a bit worn out. Answering questions and hearing jokes, every single day about that. It kind of wears on you."

Maybe it was just the fact that it was 1:00 a.m., but it seems that John Isner is done talking about Wimbledon. He became visibly frustrated when the subject is raised. When the reporter granted the last question of the session started to ask him about his relationship with Mahut, he began to walk out of the press conference room, giving one word answers to follow-up questions on his way out the door.

I have never met John Isner, and this was my first time interviewing him. But those who covered him before seemed disappointed. Many hung back and questioned what had happened to the jovial, happy-go-lucky guy that was at the Legg Mason in years past and who seemed humbled in his interviews after his match at Wimbledon.  But after a month in which he only received questions on one subject, John Isner is over it. 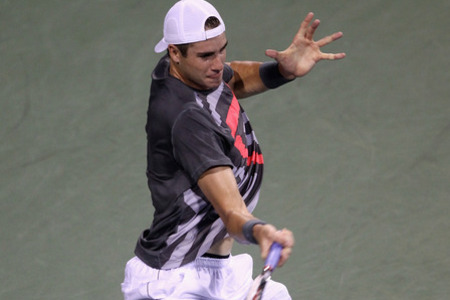 But he has to know this is coming. While he has been getting the same questions over and over again, each city he travels to and each tournament he plays in provides a new group of reporters who haven't yet had the opportunity to talk to him about it. He is still an excellent tennis player, but that match remains his most marketable accomplishment. We all want one soundbite, where he says something about that marathon match. Reporters will continue to ask him about it, and he will continue to get frustrated, until he does something that puts that match in the rear view.

If he thinks the dozen or so reporters assembled at 1 a.m. at the Legg Mason Classic were frustrating, I shudder to think how he will handle the onslaught of questions he will inevitably receive in advance of the US Open later this month. It took him three days to dispatch Noclas Mahut in London. It remains to be seen how long it will take to put it behind him.