Which Washington Athlete Best Embodies The Spirit Of The City?

Only a handful of athletes over the years have been able to truly represent the strengths, weaknesses and values of the city on the playing field. Who does that best in Washington? The answer might surprise you.

Share All sharing options for: Which Washington Athlete Best Embodies The Spirit Of The City?

Fans and athletes have little in common. Though we may try our best to bridge the fan-athlete gap through getting a player's autograph, following them on Twitter or wearing their jersey, it's hard to really relate with the players representing the home team.

Every once in a while, however, a player and a city come together so perfectly that the player becomes a symbol of everything good about the city. Baltimore had it with Johnny Unitas and Cal Ripken. Their gritty, humble, no-nonsense approach to their craft mirrored the mindset of the small, blue-collar town where they played. In the same way, Reggie Jackson and Joe Namath's larger than life personalities and swagger were perfect fits in a city that oozes confidence straight into the East River.

Players don't just have to be legends in order to connect with a town. Bill Laimbeer won't ever make the Hall of Fame, but his playing style endeared him to Detroit fans forever. Bernie Kosar never took the Browns to the Super Bowl, but he's still remembered fondly in Cleveland nearly two decades after he played his final game in Ohio. Jeremy Lin is already a cult hero in San Francisco, and he hasn't even played a game for the team yet.

So who fits the profile in the nation's capital? To find the right athlete, first we must understand the city we live in better in terms of demographics, and what beliefs and ideals. 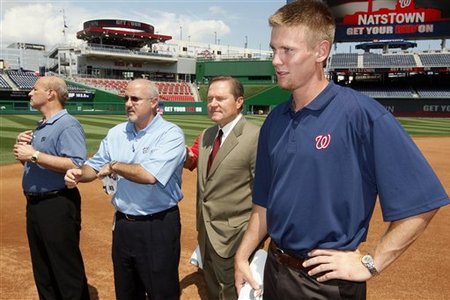 D.C. is a diverse city: Race doesn't play a factor in who we root for like it might in some cities. Black, white, gold or burgundy, it doesn't really matter where you're from as long as play well. Whether you're a pitcher from Cuba, a forward from China, a Tongan tackle or a winger from Russia, you'll have support in the nation's capital.

To outsiders, D.C. represents wasteful spending and inefficiency: Sure, it's unfair to pass on the characteristics of what happens on Capitol Hill to the rest of the city, but that's what stereotypes are all about. Fair or not, that stereotype isn't going to change.

D.C. appreciates hard work: Hey, it's the capital of the free world. If you want to get ahead in this area, you better be ready to work your tail off. The D.C. area has some of the most demanding jobs in the world, including the job of the guy who works on 1600 Pennsylvania Ave. There's a reason why the The Hogs are the most beloved offensive line in the history of football: They did the dirty work, and they did it better than anyone else before or after.

D.C. will forgive your faults: Mambo Sauce gave us the most descriptive lyrics you'll ever find about Washington's capacity to forgive and forget:

Even the mayor had a run in with Crack,
But we all kept it real and we voted him back.

If anything, D.C. wants you to fail, pick yourself up and come back stronger than before. The city was built on the ashes of the original Washington D.C. which was burnt down by the British (whom we forgave, like everyone else) in 1814. As long as you make amends and give your best to the city, Washington will give you a second chance. Unless you're Marty Schottenheimer.

D.C. likes higher-ups to be relatable: Washington D.C. is a town where the elites are cut off from everyone else by secret service agents, red tape or in some cases, the desire to separate themselves from the common man. Ted Leonsis will always be more respected than Dan Snyder because Ted does everything he can to connect with his fans and his employees. Dan hides in his office behind an impenetrable wall of PR people, though he's starting to shed that reputation. Sure, Ted would have the upper hand in any city, but especially in Washington, where people can sniff out phonies from miles away, transparency, openness and relatability will earn you respect.

So, knowing what we know about the District, let's consider what the ideal D.C. player would have to possess in order to develop a true connection with the city:

Now ask yourself: What good, hard working, fan-friendly, somewhat overpaid D.C. area athlete that has gone through some ups and downs recently can you think of? 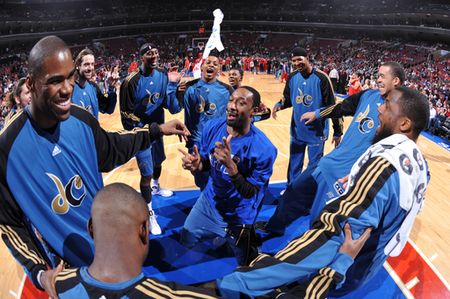 For better or worse, Gilbert Arenas is D.C.'s spirit child. When he succeeds, we take the utmost pride in his accomplishments. When he fails, we feel the pain like a disappointed parent. Whether he's dropping daggers or other, less-welcome gifts, Arenas tugs at D.C.'s heartstrings better than anyone else.

Gilbert Arenas wouldn't win a popular election to be the athlete that best represents the spirit of Washington D.C., but he is the most accurate representation of everything that makes the city what it is. His strengths and weaknesses mirror the strengths and weaknesses of the town. As much as we might want to get rid of him from time to time, we can't ignore the unique bond he's formed with the city.

You might not be thrilled with Gilbert Arenas being the best representation of D.C., but that just further shows what a good fit Gilbert is in D.C. Since when has anyone ever been 100 percent satisfied with who represents them in Washington?