Playing a tournament in Washington D.C. has its perks. For Sam Querrey and the Bryan brothers, those perks include meeting the president.

WASHINGTON, D.C. - Playing in a tournament in the Nation's Capitol has it's perks. For some, those perks are just shopping in Georgetown (I'm looking at you, Andy Roddick). But for a lucky few, those perks are a little bit more exclusive. 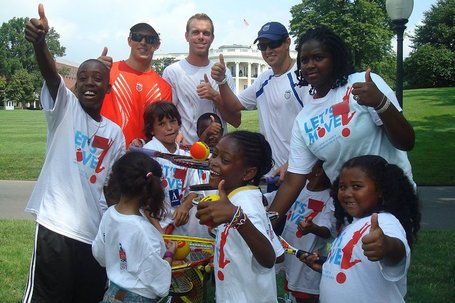 Earlier this week, Sam Querrey, along with Mike and Bob Bryan, the most successful doubles team in tennis history, traveled to the White House representing the Let's Move Program, started by First Lady Michelle Obama, to fight childhood obesity. The three pros were rallying with kids on the White House's South Lawn when Barack Obama came to pay them a surprise visit.

Querrey had this to say about the experience:

"That was awesome," he said. "(Michelle Obama) couldn't make it, so near the end, Barack just kind of popped around the corner and was like 'Hey guys! What's up?' No one saw him coming. He just kind of snuck around. It was really pretty cool. I think Bob, Mikey and myself are all going to remember it forever."

One meeting and we're already on a first name basis with the Commander in Chief? Interesting, but I digress ... 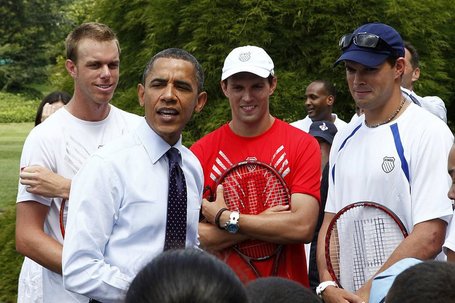 After their match against the reigning NCAA doubles champions, UVA's Michael Shabaz and Drew Courtney, the Bryan brothers shared their White House experience.

Mike: "It was a lot of fun. ... There were a ton of kids. You know, we didn't expect to meet the President -- it was supposed to be the first lady, and we were excited to meet her. She didn't show up, so we were a little bummed out. It was still a lot of fun with the kids, and we were getting ready to leave, but my dad grabbed the mic to say a few more things, and luckily my Dad extended the clinic, so we got to meet the President. He kind of just popped up from behind us. He was just kind of standing by himself ..."

Bob: "Not by himself, he had like 20 Secret Service People."

Mike: "Yeah, yeah. No one knew he was coming, and he was just kind of standing behind a tree. Everyone just kind of stormed over there, but luckily we were first in line. He said, 'You guys are those twins. I read about you in Sports Illustrated.' Which, you know, is pretty cool. He was nice, and we talked for a few minutes."

Both used the word "popped" when describing the President's entrance. I'm a little confused about that. How can the President just sneak up on anyone, ever? Doesn't he have a small army in tow that makes the ground tremble in advance of his arrival? You can see some of them in the picture below. I just can't quite picture Obama just kind of creeping in and tapping somebody on the shoulder. 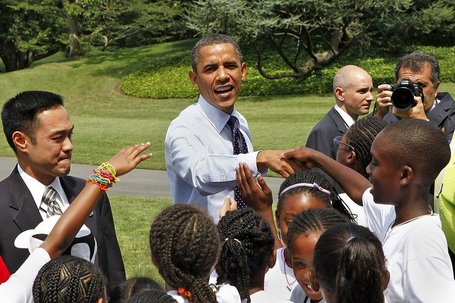 The Bryan Brothers advanced to the quarterfinals on Wednesday, while Querrey was knocked out of the tournament Janko Tipsarevic. But regardless of their results this week, all three will be leaving Washington with lifelong memories.

Pictures via Mens Tennis Blog, via the ATP.