Terrence Austin Is Turning Heads, Because He's A Quick Study

The Redskins' return game was abysmal last year, but they may have found an answer in seventh round draft pick Terrence Austin, who has turned heads at Redskins Park thus far.

Share All sharing options for: Terrence Austin Is Turning Heads, Because He's A Quick Study

ASHBURN, Va. - When Terrence Austin was preparing for his freshman year at UCLA, he got a piece of advice that he pledges never to forget. He was stuck behind two experienced upperclassmen that blocked his path to the field, and as a highly touted recruit coming out of high school, it would have been easy for him to pout.

Instead, he followed the advice he was given, and decided to devote time and energy to also making a name for himself on special teams.

"We had a couple seniors that was ahead of me, so I just went the special teams route. I never did punt return before, but I just took on the duties and I ended up being good at it," he says. "I'm glad that I got that advice early."

Four years later, Austin is following that same advice he was given as he tries to make a name for himself as a seventh round pick of the Washington Redskins.

"The best opportunity to make an NFL team is to be involved in special teams. I've embedded that into my mind even since I started returning kicks in college," he says.

But of course, by devoting oneself to special teams, a player also improves their standing in the wide receiver rotation. It takes most players a long time to swallow their pride and figure this out, but not Austin. Whether it's due to his intelligence, demeanor, previous experience, desire or a combination of the four, Austin is turning heads here at Ashburn.

The best part? Not only is he impressing in special teams drills, but he's also showing he could be far more than merely a return man, even though he only arrived at the team's offseason training program in mid-June because he was finishing up classes at UCLA.

"Very few players came come in late and pick up the offense as well as he did," Mike Shanahan says. "For him to be as far along as he is, is a real credit to him." 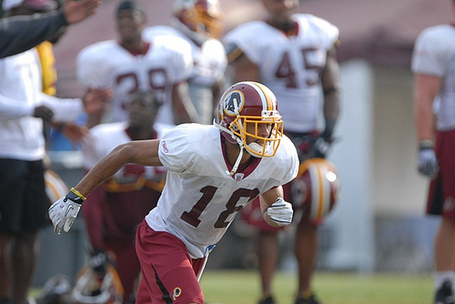 Austin's resourcefulness has carried him a long way. At just 5-foot-10 and 165 pounds, Austin is far away from being the ideal size for a wide receiver, and while he clocked an impressing 4.38 time in the 40-yard dash at the NFL Combine, he wasn't able to use his speed to score any touchdowns on special teams in college. Granted, Austin was a world-class high jumper in high school and even hit 6-foot-9 at a track meet at UCLA on just one day's practice, but he also admitted, "I may be sometimes canceled up if the QB throws the ball a little high, because nobody expects me to get it [because of my size]."

This isn't to say Austin lacks supreme physical tools, but it is to say that Austin hasn't made it this far because of natural ability. Instead, he's made it this far by studying others and working his ass off.

The studying others part started back in high school. Austin attended Long Beach Poly, an athletic factory that has produced stars such as Tony Gwynn, Billie Jean King, Chase Utley and Willie McGinnist. One of Austin's high school teammates for three years was DeSean Jackson, the standout speedster for the Philadelphia Eagles. Austin says he worked with Jackson closely and studied him for years, even though he says "we're totally different receivers."

"The thing I focused on with DeSean is how quick he is in and out of breaks," Austin says. "The way he uses his speed and the way he disguises his speed; those are the type of things I try to emulate." 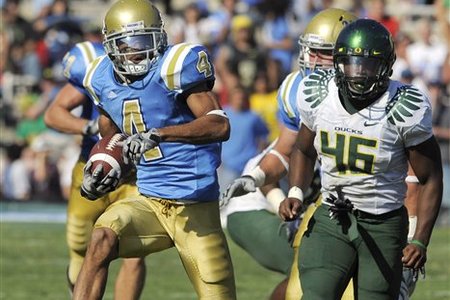 To the naked eye, Austin's development as a kickoff and punt returner was due to his natural talent rather than his work ethic or resourcefulness. And maybe that's somewhat true. After all, despite not even being a returner prior to college, Austin developed to the point where he was the only player to finish in the top 15 in the nation in both punt return and kickoff return yards last season. He didn't take any of those returns to the house, but he consistently put UCLA in good field position with many solid returns.

"I watched him all the time - he's broke a lot of returns, but he hadn't been able to take it the distance," Redskins Special Teams Coach Danny Smith says. "But he has great vision, makes quick decisions and has a great first step."

Austin admits that, in the end, he ultimately "ended up being pretty good at [returning kicks and punts]." But the transition was anything but smooth. I asked him how he was able to pick up the skills needed for those tasks so quickly, and he chuckled, saying, essentially, that it didn't happen so quickly.

"Every day, I was chewed out," he says. "I was putting the ball on the ground, but I just kept working at it."

Austin continued to struggle with learning the position early in his UCLA career, but he caught a break: his teammates were worse. Back in his freshman year, Austin's teammates, running back Chris Markey and receiver Marcus Everett, fumbled punts in the first two games of the season, giving Austin the job by default. That allowed him the latitude to keep working on improving his punt return skills while also getting good game experience.

But the next step - getting the team to let him return kickoffs - proved to be more difficult. Austin asked his coaches to let him return kicks several times, but it wasn't until his junior year when they finally relented. Austin picked this up quickly, saying he finds kickoff returns easier because it comes right to you, but it was quite a struggle to convince his coaches he could be good at it.

So don't let anyone tell you Austin became an ace return man naturally. Even that took hard work and a little bit of luck. 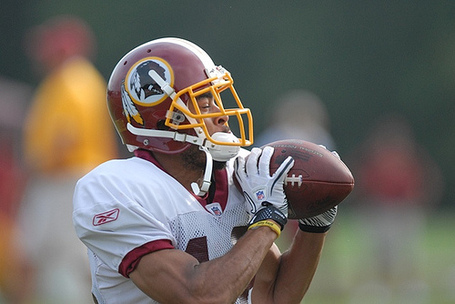 Austin steadfastly refuses to admit he's having a perfect training camp. When I ask him to rate his training camp performance thus far, Austin tells me merely that "every day I've been doing fairly well, aside for some minor mistakes here and there, loss of concentration here and there."

But he also had perhaps the highlight of the first week, making a beautiful over-the-shoulder catch on a Donovan McNabb deep ball on Monday that elicited a roar from the assembled fans. He would have had another one Wednesday, as he put a great double move on his defender, only to see Rex Grossman overthrow the pass. Maybe he's missing assignments, but I'm not seeing them.

It's hard to call him a lock for the 53-man roster, and it's equally hard to say that he has the inside track on the kickoff and punt returner jobs. But it isn't hard to say that Austin has significantly outperformed expectations for a seventh round pick thus far in training camp. For Redskins fans used to the sad sight of Antwaan Randle El awkwardly signaling for fair catches and muffing the punts last season, that's music to their ears.

"He's going to get a great opportunity," Smith says. "We'll see how much he can handle." 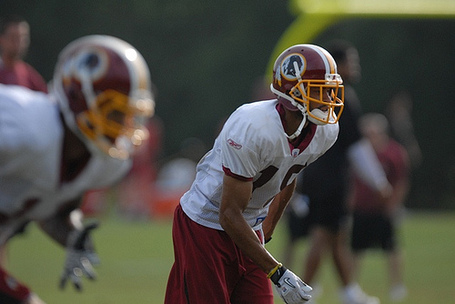