Michael Shabaz and Drew Courtney are both from Virginia. So even thought they were facing the Bryan brothers, one of the greatest doubles team in the history of tennis, they had the home court advantage.

WASHINGTON D.C. - Michael Shabaz and Drew Courtney were both born in Virginia (Shabaz in Reston, Courtney in Clifton), and both stayed relatively close to home to play tennis at the University of Virgnina. On Wednesday, they played arguably the biggest match of their lives, in front of a nearly sold out crowd at center court at the Legg Mason Tennis Classic.

But that's not all. It's one thing to be playing in your first center court match, but it's a little different to be playing that match against one of the most decorated doubles team in the history of the sport. Shabaz and Courtney were the first round opponents of Mike and Bob Bryan, the identical twins that recently broke the record for most career titles by a doubles team.

"It's funny because growing up you've watched them play on TV, watch them win multiple tournaments," Shabaz said. 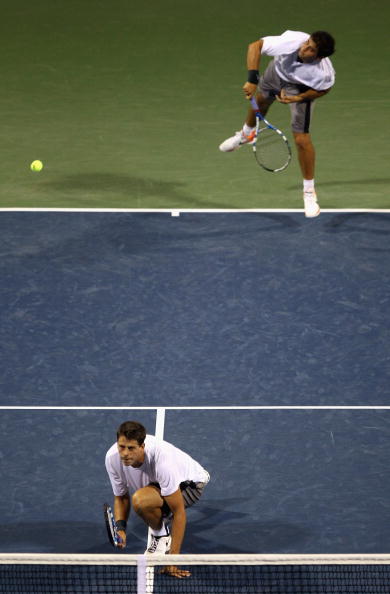 "Coming out of the tunnel, I'm not going to lie, I was pretty nervous," Courtney admitted. "But there were so many hometown fans, a lot of people in the crowd that, you know, had seen us play before. It was amazing."

This wasn't the first time they met the Bryan brothers, to be fair. Well, technically, at least.

"I met the Bryans when I was a little kid asking for autographs," Courtney said. "[Andy] Roddick? Same deal. I never thought I'd be out at center court playing against them in front of a crowd like that."

The crowd was surprisingly split considering the relative success and fame of the Bryan Brothers. It started with the small pocket of friends and loved ones, but as the UVA boys kept scrapping and kept the match close, more and more fans started to support them.

"Everyone I met in my entire life came out tonight, i think," Courtney admitted. 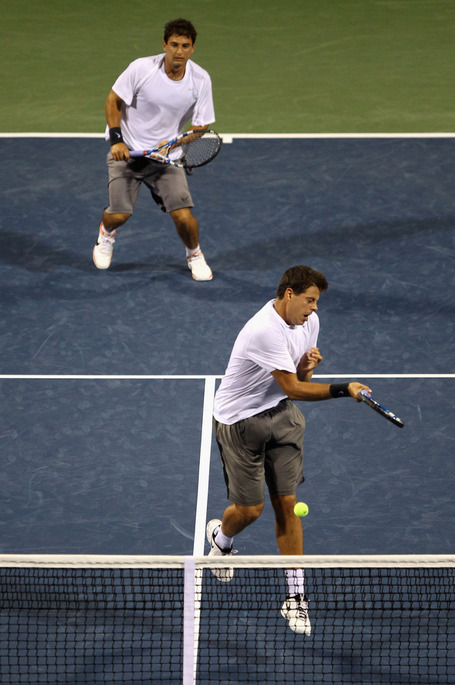 Shabaz and Courtney are the reigning NCAA doubles champions, so they are by no means slouches, but it is a little surprising how well they played against the Bryan brothers, considering they were just added to the field on Sunday. They took the first set to a tiebreak and only lost 6-4 in the second.

"They're good guys," Shabaz said. "But I think we learned playing with them that we can hang with the best players in the world. There was a lot at stake in the match, and it was great."

The elders statesmen of the match, the Bryan brothers, couldn't help but be impressed with their young counterparts.

"I gotta give them credit, [because] they didn't have a lot of nerves," Mike Bryan said. "Sometimes, a young team will show nerves and miss a lot of first serves. Those guys were bringing the bombs and it was very difficult to get in a good point, or expose any weaknesses during that match. They were just serving too well."

They won't be advancing in the tournament, but any time you can earn praise from a pair as accomplished as the Bryan brothers, and you can do it in front of friends and family, you've had a pretty good day.

"Yeah I think, we both feel like we got the most out of the experience," Shabaz said. "The crowd was electric for both sides, and there were obviously a lot of Virginia fans there. I don't think we could ask for anything more."