Baltimore has shown interest in luring the soccer team, but will D.C. United make the move?

A beautiful new soccer specific stadium in Southeast Washington. Right on the water. And with Nationals Park just across the river, D.C. had the potential of creating a real stadium district for the first time in the city's history.

The Poplar Point area was envisioned by D.C. United as the perfect spot for a soccer field. It had everything: nearby public transportation, a downtown locale, the potential for adjacent restaurants and retail. Adrian Fenty paid lip service to D.C. United fans during his campaign four years ago, going so far as to claim that "I am going to make it a priority to help you build that stadium."

Once elected however, Fenty's support for United's stadium efforts fizzled out. The Poplar Point land was turned over to developer Clark Realty Capital, who had the option of including the stadium in their end product, or not. When the economy went south though in early 2009, the project could not survive. 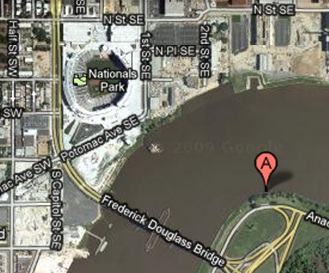 With Poplar Point essentially out of the question, United has been seeking alternate locations to build a new soccer specific stadium. Prince George's County and Montgomery County in Maryland have each been discussed. Conversations have been had with several jurisdictions in Northern Virginia. But the District would always be the top choice.

While this search continues, United continues to lose more money every year while playing at RFK Stadium. The Stadium is controlled by the D.C. Sports and Entertainment Commission, which takes a chunk of money out of every event hosted at the stadium. United can't control the concessions and they can't control the parking, so without many other options for revenue, the team cannot afford to stay there much longer. And that's without even mentioning the cats, rats and raccoons who reside in the decrepit structure.

Remember all those great things we said about Poplar Point earlier? We discussed a downtown locale near public transportation in a stadium district on the water. Baltimore has all those things too!

So why then should we be so opposed to the team moving 45 minutes north on I-95?

One major problem is that the majority of United's season ticket holders reside in Northern Virginia. Without a good public transportation option from D.C. and its suburbs to Baltimore, many current United fans would be out of luck. Another obstacle is demographics. Soccer fans are typically an interesting blend of hispanics and young urban professionals. The District has a great number of each. As does Northern Virginia. But not Baltimore.

United's fanbase is becoming restless. Attendance is steady so far this year, but probably not for long with the team's awful record. United needs some positive stadium news in order to reenergize that fanbase. And they need it quick.

Here's what I know for sure: If you see a raccoon driving a Mayflower truck down East Capitol Street towards RFK, watch out.