Ten Figures Who Have Made The Redskins-Cowboys Rivalry Great

What happens on the field makes the Redskins-Cowboys rivalry compelling, but it's the personalities that stir up the hatred each year. Here's a look at ten figures in this rivalry who have found ways to up the ante for both sides.

Share All sharing options for: Ten Figures Who Have Made The Redskins-Cowboys Rivalry Great

Rivalries are a beautiful, beautful thing in sports. They give meaning to games that lack significance, define friends and foes and allow fanbases to dig deep within themselves to find the most insulting things they can say about their rivals.  Rivalries are the reason why Washington's and Dallas' fanbases have as much passion and fervor as any in the NFL.

As the Redskins-Cowboys rivalry adds two more chapters to its history each year, more players are cast as heroes or villians -- depending on which side tells the tale -- each season. There isn't enough storage space on the SB Nation D.C. servers to dive into everyone's story, so instead I'll focus on ten who have played a role in making this rivalry so great over the years. I should note these aren't necessarily the ten most important figures (we could argue that from now until Sunday night) just ten whose narrative I feel have made a meaningful contribution to this rivalry. 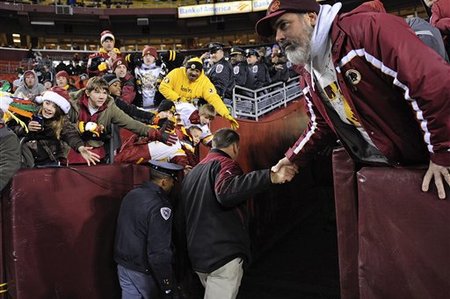 You probably didn't expect to see a journeyman NBA player make this list, but Darrell Armstrong provided a reminder of just how entrenched the two sides of this rivalry are before a Mavericks-Timberwolves game in 2005.

The Redskins had just finished thumping the Cowboys 35-7 and Armstrong, a Redskins fan playing for the Mavericks at the time, used the opportunity to throw some extra salt in the wound, shouting "How 'bout those Redskins!" to a less than receptive crowd. His smack talk led to a $1000 fine after the game.

What stings worse than seeing a player on a rival team be a constant source of agony and frustration over the years? Handing him a contract to join your side, only to see his production fall off of a cliff and tie up your team's cap space.

The thought of Darrell Green in a Cowboys' jersey is abominable, but let's say after the Green's final season the Cowboys gave him a ridiculous contract for one last chance to make a run at a title, even though everyone knew he was just about done when he finally hung them up. Would you give Green the go-ahead to join the Cowboys if you knew his presence would only hurt the Cowboys? If you're nodding your head, then you understand why Deion is on this list.

"Nobody ever thought anybody could catch Tony," recalls Joe Theismann. "Darrell's legacy and reputation sort of asserted itself in that game. There was no way I thought Darrell would catch him. Darrell has run sub-4.3s forever. He took a great angle and managed to catch him. It's really one of the great highlights of Darrell's career and established him as an incredibly quick and fast defensive back."

Green served notice to the Redskins that night they had a keeper and made it clear to the Cowboys they wouldn't be getting any easy touchdowns against the Redskins, through the air or on the ground. He also provided some offensive spark against Dallas, scoring two of his seven career touchdowns against his arch rival.

The quick way to tell if the Redskins beat the Cowboys without knowing the score is to check the team's rushing yardage. Whether it's John Riggins gashing the Cowboys for 140 yards in the NFC Championship, Clinton Portis running for over 100 yards in the season finale in both 2005 and 2007 to help cap the Redskins' improbable runs to the playoffs in both years or Brian Mitchell running for a career high 116 yards and two touchdowns against Dallas in 1993, Redskins ball-carriers are the driving force behind almost every Redskins win in this rivalry. The fastest way to earn the respect of Redskins' fans in this rivalry is to stiff-arm some Cowboy linebackers on your way to endzone.

Dallas seems to have a gift for picking quarterbacks who excel at being media darlings and causing heartache for Washington year after year. Whether its Roger Staubach, Troy Aikman or Tony Romo, Dallas knows how to find talented, easy-to-hate quarterbacks. Even when they don't have Pro Bowl level talent lining up behind center, Dallas has relied on players such as Clint Longley, Quincy Carter and Chad Hutchinson have given the Redskins bad memories as well.

Gibbs saved the Redskins-Cowboys rivalry from the brink of irrelevance during both of his tenures as the Redskins' head coach. Washington had lost seven of their last nine against Dallas when he took over in 1981, and though he didn't break through against Dallas until the next season, his presence ushered in an era of Redskins dominance to the rivalry for the next decade. When he returned, he helped the Redskins sweep the season series against the Cowboys in 2005 for the first time since 1997. Without Gibbs' presence, the Cowboys very well could have exteded their dominance in this rivalry from the late seventies until now. Would this rivalry still be exciting if Redskins fans could only cling to one win against Dallas every seven years?

Since he has taken over ownership of the Cowboys, Jones has been the most interesting character in this rivalry by a Texas-sized margin. He's easy to hate because of his over-the-top personality, meddlesome style and pursuit of big-name players. He provided a contrast to Jack Kent Cooke, who was more of a hands-off manager. At the same time, he provides a standard that his contemporary, Dan Snyder, has tried to emulate, but failed to reach.

It also doesn't hurt that Jones is more or less a real-life version of Richard O'Hara, which makes the jokes easier to write.

Am I pandering a little bit? Sure. But fans are just as big of a part of making a rivalry what it is as the players on the field. Redskins vs. Cowboys would lose its' luster if there was no "We Want Dallas!" chant. Those games at RFK wouldn't have been as special if the fans didn't make the stands rock every year. The hatred for Dallas wouldn't be as high if fans didn't burn Cowboys helmets every season, reminding themselves just how important this rivalry is in D.C. Sure, Dallas fans add some spice to this rivalry as well, but until they start personalizing their plates to announce their Dallas-hate, Redskins fans will always deserve more credit for making this rivalry what it is. 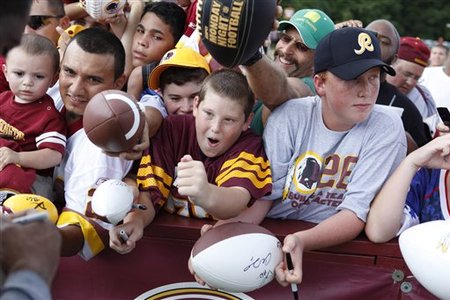