This week, Varsity News has all the important news from high school sports, and the revelation that we may be cursed. Seriously.

It wasn't a particularly good week for teams that I ranked in my top five to watch this season. DeMatha was pushed to the limit, Woodson got shut down and Good Counsel, arguably the best team in the region, lost.

So having said that, I'd like to introduce the Varsity News curse. Basically, it works pretty much the same as the SI curse or the Madden curse. When I mention a team, things go south in a hurry. Or at least it seems. Here's what my five teams to watch did this week.

I'm pushing a healthy 80 percent espionage rate rate now. I'd be an above average free-throw shooter. That's too high. I'm counting the two teams that struggled because they reeaalllyyyy struggled (more on that later).

Hopefully I'm just being paranoid. There's no way they can actually trace all this back to me, right? Let's try an experiment. I'll name a team and if they lose we'll know there might actually be something here. 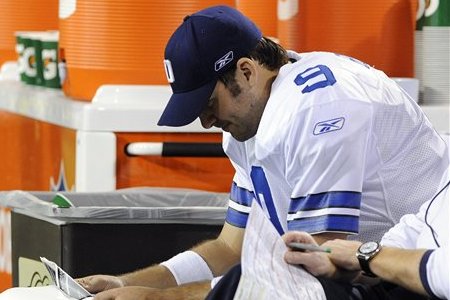 This is a performance of the week ... sort of.

This was the biggest game of the weekend and it got a good amount of hype last week based on what happened when these two teams met last year. I'll admit it, I got caught up in it. I went to Eastern High School last week hoping for a game that was equal parts Rudy, Any Given Sunday, Playmakers and Space Jam. Basically, I was looking for magic.

What I got, was something like a card trick. Don't get me wrong, it was a well-played game. Both teams had stout defenses, and most of the issues the teams were facing were not self-made, but rather the cause of things the other team was doing.

But it just didn't have that spark. Friendship scored relatively early, and held a 6-0 lead at halftime. They scored early in the second half to extend their led into the low 20s. The most excitement in the game came when H.D. Woodson, then down big, scored a touchdown and subsequently forced a turnover to get the ball back. It was the only time throughout the whole game that both sides of the stadium were on their feet, because it looked like H.D. Woodson might make a game of it..

But Friendship quickly squashed the drive, got the ball back and ran out the rest of the clock. Ball game over, Friendship wins 26-6. There was plenty of excitement on the Friendship sideline, but it wasn't about the way the game was played. It was about overcoming the disappointment from last year and winning against an opponent who has traditionally been a roadblock. They didn't really care how the game was played as long as Friendship had more points than Woodson when it was all over.

Coach Aazaar Rahim told me after the game that he was happy with the win, but that the team can play a whole lot better. Out of context, I wouldn't normally consider the way Friendship played for the Performance Of The Week award. But considering the circumstances of Friday's game, I had to give it to them.

Team Of The Week: Gilman Over Good Counsel 28-7

We mentioned last week how good Good Counsel looked in their season opener. That may have just been too much Varsity News attention to keep that good momentum going. And you hate to see that.

Or maybe it was just how Gilman played that was the problem for Good Counsel. 28-7 victories over nationally ranked teams don't just happen.

The game was tied at seven early. but then unfortunately for Good Counsel, Gilman decided they were going to score the rest of the points that day. Three touchdowns: one rushing, one passing and one on an interception return, gave Gilman the convincing win.

Gilman's quarterback Darius Jennings was a real problem. In addition to his work through the air, he had 142 yards on the ground. Good Counsel just couldn't bring him down whenever they needed to make a big stop.

This might be the first time the Team Of The Week award has been given to one team by another. But if this Varsity News curse thing has legs, it will probably just go to whoever plays Gilman next.

If somebody showed you the box score for a game at any other level this weekend, and saw their quarterback was 0-6 with a pick -- and it wasn't just him, nobody on the team completed a pass all game -- you certainly wouldn't expect that team would win. But it's not totally impossible. Why else would would your friend show you the box score? Because it's an unusual occurrence. Nobody just carries a newspaper around.

But what if that same team also allowed 321 passing yards and four touchdowns by a pair of opposing quarterbacks? That settles it, right? No way these guys could win. If this is a quiz, I'm voting loss.

And I would fail that quiz. That box score was from DeMatha's game last week against Loyola Blakefield, a game the Stags won 45-31. How did they do it, even without a completion or a consistently effective defensive secondary?

They did it on the ground. Le by Delonte Morgan, seven Dematha running backs combine for 422 yards rushing and all but one of the DeMatha touchdowns. The future Terp led the team with 157 rushing yards and two touchdowns on just 16 carries, including a back-breaking 36-yard touchdown with seven minutes left in the fourth quarter that put DeMatha up for good.

For performing because they really really needed him, Morton earns this week's POW award.

Four. That's four teams that I mentioned in my season preview that played poorly last week. Dunbar trailed late in the game against McKinley, in what would have been a major upset in the DCIAA. But Dunbar was able to get a passing touchdown with just 33 seconds left to the tie the game. They elected to go for two, and made it to escape with a narrow 14-12 victory.

This Week's Game To Watch:

Damascus and Quince Orchard are both very good teams, and at times this rivalry has not been the most friendly. This week, their game will not only be good, it will do good.

The game has been called the "Battle for the Cure." The two teams are selling t-shirts and accepting donations to benefit the Juvenile Diabetes research Foundation. This game is a must see, both for the quality of the competition and the ability of the teams to direct the attention they'll get to a good cause.