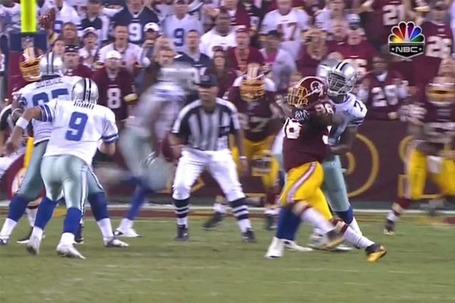 In a game marred by mistakes and sloppy play, it's only fitting that the Redskins-Cowboys season opener was decided on a penalty. The Cowboys had a game-winning touchdown on the final play of the game, but it was called back because of a holding penalty on offensive lineman Alex Barron.

Barron was caught blatantly holding on to Brian Orakpo's jersey as Tony Romo scrambled away. The referees surely didn't want to end the game on a penalty, but the infraction was obvious. It was a dramatic conclusion to a game that was exciting, if not always well-played.

The Cowboys got the ball with 1:50 left after Redskins kicker Graham Gano hit a 49-yard field goal to give the Redskins a 13-7 lead. Romo and the Cowboys moved the ball to the 13-yard line, aided by a 31-yard reception on fourth down by Miles Austin. On the final play, Romo bought time and found a wide open Roy Williams in the right corner of the end zone, but the play was negated by Barron's penalty.

(Screengrab via Michael Tunison of SBNation.com).