The Odd, Bizzarre and Downright Weird Numbers From Redskins-Cowboys

No, numbers don't tell the whole story, but they sure do come in handy when trying to talk about Sunday's bizarre game between the Cowboys and Redskins.

Share All sharing options for: The Odd, Bizzarre and Downright Weird Numbers From Redskins-Cowboys

Sure, the Redskins' win over the Cowboys was three nights ago, but because it was such a wacky game, let's take one last look back at some of the most telling (and strangest) numbers from the game.

Brian Orakpo deserves all the credit he's earned for forcing Alex Barron into a hold that saved the win for the Redskins, yet I don't think he's gotten enough praise for his work on that final play. Jim Haslett didn't call some sneaky blitz to open up him up for a blitzing opportunity. Orakpo just used his natural pass-rushing ability to force the issue on the final play, even though the Redskins only sent three rushers and dropped everyone else back in coverage. To be able to generate that type of push into the backfield on the final play of the game, with a three-man front? That's awesome.

Number of people Marc Colombo -- who Dallas probably could have used against the Redskins -- follows on Twitter. He needs only 355 more in order to follow one person for every holding penalty Alex Barron has committed in his career.

The Redskins had enough players dropping back in coverage to put a man on each Cowboys' receiver and still have three players who could roam around the end zone for extra coverage support. Yet, somehow, Roy Williams still managed to find a way to be completely open for the negated touchdown at the end of the game. Brian Orakpo better get some free dinners from the Redskins' secondary this week.

Number of Cowboys fans in this shot who didn't see the flag thrown on the final play of the game. 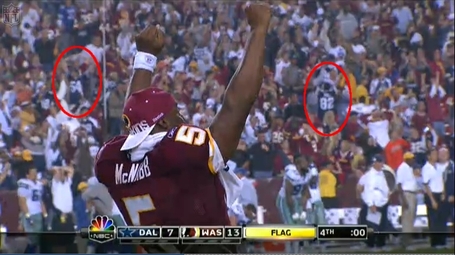 It must have really stunk for the guy on the left who turned around to taunt the Redskins fans behind him, not realizing there was some yellow laundry on the field. Coincidentally, that penalty flag was the same color as the egg yolk he had to wipe off of his face. 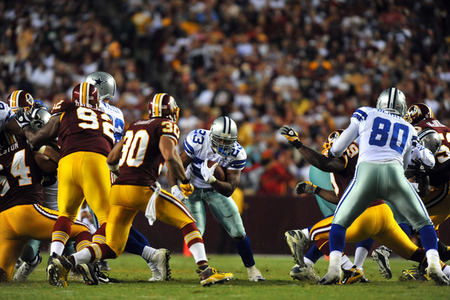 Number of times Tashard Choice fumbled in his first two seasons in the NFL. More impressively, he didn't fumble once during his collegiate career. That means he went six seasons without coughing up the ball once, before being stripped by DeAngelo Hall. Choice would almost be a sympathetic figure if he wasn't a Cowboy.

Number of fumbles Tony Banks had during his 15 games as a Redskin.

Jim Haslett's record as head coach with the UFL's Florida Tuskers last season. It's amazing how one can go from trying to restore their coaching reputation by coaching in an upstart league with four teams to being lauded for putting together a defensive scheme that everyone not named Albert Haynesworth seemed to be impressed with on Sunday.

Jim Fassel's record as coach of the UFL's Las Vegas Locomotives last season. Two and a half years ago, Fassel was the front runner for the Redskins' coaching job, now he's trying to lead the Locos to a second UFL Championship. At least he wasn't playing bingo last year.

Average yards per carry gained by the Cowboys' offense, good for the ninth best average in the league last weekend.

Number of rushing attempts by the Cowboys last weekend against the Redskins. Only seven teams ran the ball less times than Dallas last weekend, and like the Cowboys, they all lost.

Average yards per carry gained by the Texans' offense on Sunday. You can bet they won't run the ball only 22 times on Sunday if they can maintain that average. Last week, they stuffed the ball down the Colts' throat 42 times.

Percentage of fans who will buy into the hype if the Redskins are still undefeated on Monday morning. 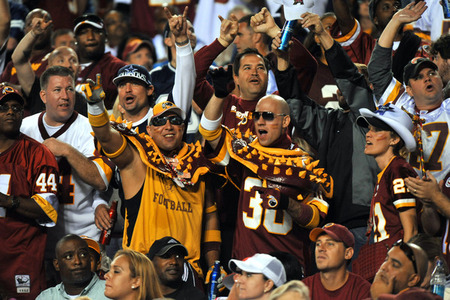