Varsity news is back to wrap up the week that was in high school sports, and this time, we're not all about football. Mostly still, but not all.

The Jewish holiday of Yom Kippur starts Friday and ends Saturday night. As a result, many of the games that would normally be played on Friday night, were moved Thursday. Nobody wants to play football on an empty stomach, after all.

As a result, Varsity News is crowded this week. We had plenty to choose from, and picked the best results of the week. So without any further adieu, let's get right into it. 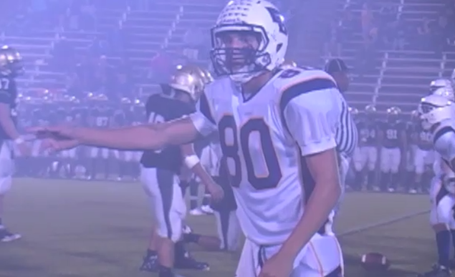 On Thursday, Lake Braddock traveled to Chantilly to take on Westfield, another one of the top teams in the area. Many consider Lake Braddock the favorite to win the Virginia state title, but in the game on Thursday, Westfield might have actually had an advantage. Home field helps, but it was the forecast that really favored the Bulldogs.

Lake Braddock runs a pass heavy no huddle offense. Head coach Jim Poythress, who runs the offense, doesn't even wear a headset. Scattered thunderstorms don't normally mesh with that type of attack. Add that to the fact that Westfield is known primarily for its defense, and it seemed like an upset might be in the air.

On the opening play of the game, quarterback Michael Nebrich hit Zanellato on a quick slant that he was able to turn into a 50-yard gain. That set the tone for the rest of the game. Every time Lake Braddock needed a first down, it looked to Zanellato. He did most of his damage on the sidelines, with corner routes and quick outs. He was just too tall for the defense to deal with.

The biggest play of the game came in the second quarter. Nebrich dropped back, and threw the ball to a streaking Zanellato along the right sideline. He caught it, and sprinted in for a 50-yard touchdown. But everyone in the stadium could see that Zanellato was two or three paces out of bounds when the pass was thrown, and ran back onto the field of play to make the catch. I was about three yards away from the sideline, and I could have tripped Zanellato on his way by me. You can see video of that catch here.

The Westfield sideline pointed out the obvious, and expected the touchdown to be negated. But the officials ruled that Zanellato was forced out of bounds by the defender, which is a no no. The touchdown stood, and it would prove to be the game winning score. Lake Braddock won, 12-7.

Yes, the rain affected what Lake Braddock wanted to do. Coach Poythress said after the game that he never would have expected 12 points to stand up, but that his defense played well enough for it to count.

Lake Braddock never would have gotten even those 12, if it wasn't for the incredible performance from Matt Zanellato. 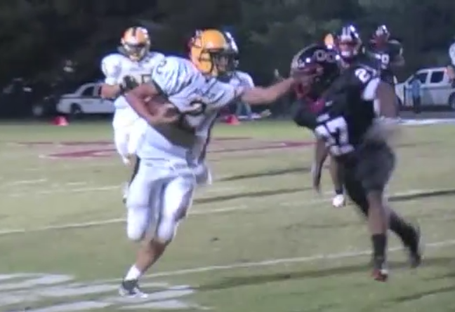 The atmosphere at last weeks game between Damascus High School and rival Quince Orchard was unlike anything I had ever seen at a high school football game.

There was a group of about 100 Damascus students forming a makeshift gateway that cars had to drive through on their way around the parking lot. They surrounded each car that pulled by booing any fans that wore red, and cheering everyone wearing green. My shirt was blue, by design, so I just got a handful of confused looks. I was caught a little off guard by this because the game was being played at Quince Orchard. It takes a lot of gumption to pull a stunt like that on someone else's turf.

Damascus is normally led by Brandon Phelps, a two-way player who is at the center of much of what the team tries to do on both sides of the ball. But when Phelps went down with a hip injury after a kickoff (yes, he kicks too) in the first quarter, there was a huge whole that needed to be plugged.

Damascus held an early lead, but consecutive touchdowns in the third quarter gave Quince Orchard a 23-14 lead entering the fourth quarter. That's when I decided to walk over and catch the rest of the game from the QO sideline. At the time, it was more fun over there. That's when Frazier stepped up and wrestled the game back from the home team. First, he had a 38-yard touchdown pass. Then, Damascus got a quick interception. At that point I quickly made my way back to their side of the field. Frazier then scrambled for a touchdown that put the Hornets back on top for good. Final score: Damascus 27-23.

That alone would be a pretty good performance from Frazier, but what makes him the player of the week is that he also filled Phelps' spot in the defensive secondary, playing shut down corner, and nearly intercepting a pass. It was easy to see how tired he was when Frazier participated in his post game interviews.

Coach Eric Wallich told me that putting Frazier in the secondary is something they only do during emergencies, but with Phelps out of the lineup, he knew his team needed a spark. "The heart in that kid is unmatched," Wallich said of Frazier.

Hey look! It's the first non-football thing to make Varsity News this season. How exciting.

Yes, football is king 'round these parts, but whenever the top ranked team in the area takes on the second, it gets our attention. And when that game is decided by only one goal, it certainly warrants space in the News.

Severna Park and South River are the top two teams in the area, and ever since they met in last year's 4A East Final (a game won by Severna Park) there has been a lot of tension between the two programs. South River was looking to shake a little bit of the bridesmaid syndrome when the two teams faced off on Wednesday.

The lone goal of the game was scored by Madeline Ross, on what appeared to be a simple cross. Ross' deflection changed the direction of the ball just enough to roll it into the net.

The biggest play of the game, however, was not a goal, but rather the prevention of one. Severna Park goalie Cait Colletti saved a penalty shot right at the end of the first half that would have given South River a narrow lead heading into half time. Who knows how the game may have turned out if South River had a lead, and the opportunity to build some confidence, when it headed back to the locker room.

As it was, South River was deflated after the penalty shot, and it failed to create any more real scoring opportunities throughout the rest of the game, and Severna Park walked away with a 1-0 victory.

Severna Park proved that they are the number one team in the area by beating its closest challenger. That makes Severna Park the Varsity News team of the week.

The most recent, was a 36-0 win over Laurel. On Friday, Roosevelt will face High Point, which has lost 23 straight contests. It'd be a lot to ask for Roosevelt to reach three wins without allowing a point, but I'm not going to bet against the squad.

This Weeks Games To Watch:

After good Good Counsel lost, Dematha took the throne as the number one team in the nation. After narrowly escaping Friendship last week, DeMatha gets a date with the team Good Counsel lost to.

Gilman was the Varsity News team of the week last week. I'm assuming this means Dematha has this one in the bag.