Five Keys For A Redskins Win: Is Kyle Shanahan The X-Factor Against The Texans?

Will Kyle Shanahan play a positive or negative role this Sunday when his former employer, the Houston Texans, travel east to take on the Redskins? Five keys to ensure an encore performance for the 'Skins in Washington.

Share All sharing options for: Five Keys For A Redskins Win: Is Kyle Shanahan The X-Factor Against The Texans?

The Redskins are coming off one of the most important victories for the franchise in years in front of the largest crowd at a home opener in team history. A win over archrival Dallas is always a perfect way to start the season, but the Redskins still have plenty of work to do if they wish to live up to the hype of the new Mike Shanahan era.

Some have criticized the Redskins for their "flawed" victory over the Cowboys, and they are right when pointing out Washington struggled to put the game away. But hold the phone. You tell me the Redskins would have won this past week's game last season. I dare you.

That's right, you can't. Last year the team couldn't catch a break and they would have lost that game someway, somehow. This year, things are working out a little differently so far as luck smiled on the Redskins in the form of Alex Barron putting Brian Orakpo in a chokehold.

Of course the team admitted they had some work to do in the postgame locker room. We know the team isn't perfect and the players expressed the need to tighten up in several facets of the game this week against the Houston Texans.

So what can the Redskins do to ensure an encore performance in front of the home crowd this Sunday? Here are your five keys to seal the deal on the Redskins second win of the season. 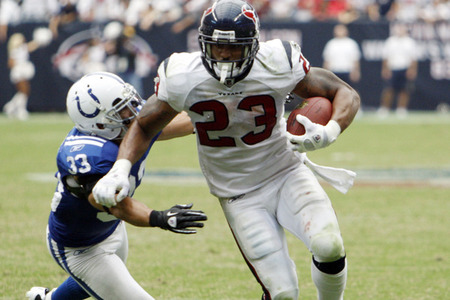 This just in: Arian Foster had a pretty good day against the Colts last week, and the Texans rushed for 6.1 yards per carry as a team. In other breaking news, the Redskins gave up 4.7 YPC to the Cowboys last week. That adds up to what could be a rough day defensively if Washington fails to adjust their scheme against the run.

The Texans were a pass-first team last year, but they showed they will use whatever philosophy necessary to win against the Colts. The run-pass ratio for Houston last week was 41-19. You might see more of the same this week if the Redskins don't improve their run defense.

Albert Haynesworth played with his usual disinterest at nose tackle and was completely ineffective. The lateral speed of the linebackers is somewhat suspect as well, but they would have more room to operate if there was a NT occupying two blockers. Anthony Bryant was the strongest nose tackle in the preseason, and there's a chance you could see him activated this week especially if Haynesworth can't go due to his sprained ankle. 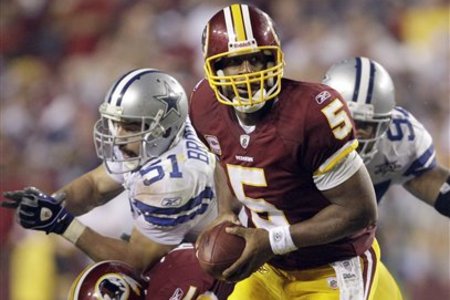 The Redskins didn't need an offensive touchdown last week, though DeAngelo Hall's fumble return for a score proved to be enough. It's a different story this week, as Washington will need a big day from their offense to keep pace with an explosive Houston team who ranked fourth in total offense in 2009.

Fortunately, Houston's defense is not on the level of Dallas', meaning Donovan McNabb will have more time in the pocket and Clinton Portis should have more room to run. The Texans have two young corners whom McNabb should be able to exploit, while Houston gave up 4.3 YPC last season against the run.

The Texans' corners are second-year man Glover Quin and rookie Kareem Jackson. Quin had a solid rookie season, giving up zero touchdowns and defending 11 passes in 12 starts, while Jackson made his debut against Peyton Manning last week.

Manning posted huge numbers in the Colts loss, shredding the Houston secondary for 433 yards and three TDs. McNabb has to be licking his chops after watching the game tape. His completion percentage must improve (a lowly 46.9 percent in week one) and he will have to spread the ball around after relying primarily on Santana Moss and Chris Cooley against the Cowboys.

If McNabb can pick apart the Houston secondary (ranked just 18th in 2009), then things will open up in the second half for Portis and the Redskins should spend more time in the end zone this Sunday. 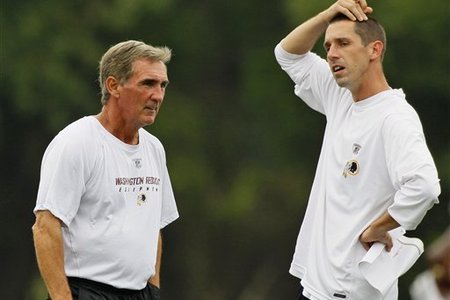 Use Kyle Shanahan As The Inside Man

Shanahan was a big reason why Matt Schaub was able to take his game to another level last season. Now it's time to for Shanny the Younger to show the Redskins what makes Schaub tick.

Shanahan is familiar with the Texans offensive scheme and he will undoubtedly enlighten Washington's defense as to how to prepare for it. On the flip side, he will have to disguise the Redskins offense so Houston won't be able to figure out what he's cooked up for them.

Houston's offense must have certainly evolved after Shanahan's departure, but he will be watching for tendencies and similarities that could lead to big plays. The Texans will have to be very careful not to tip their hand to their former offensive coordinator.

It's a game of give and take, and I wonder how much stock each team puts into the fact that Shanahan called plays for the Texans last year. It will be intriguing to discover how much of an affect Shanahan's experience in Houston will actually have on this game. 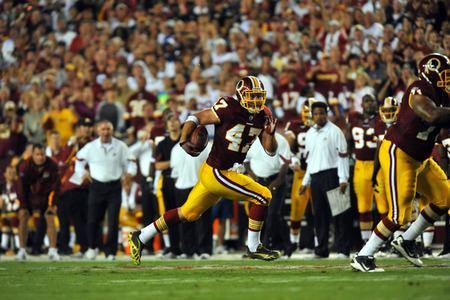 Chris Cooley had a monster game against the Cowboys. He had six catches for 80 yards, which are solid numbers, but they didn't tell the whole story.

Cooley was moving all over the place last week. He was in motion before the snap, lining up at tight end, lining up at H-back, blocking, catching and playing one of the most well-rounded games I'd ever seen him play. His downfield blocking was very strong and his instincts are uncanny when it comes to being in position to make a play. As much as I preach the need to have a second wide receiver emerge in the passing game, I stress the following even more so:

Get Cooley the ball in the red zone.

The tight end is the quarterback's best friend inside the opposing team's 20-yard line. The Redskins have Cooley and they have Fred Davis who was the number one red zone option for the back end of the 2009 season. Both know how to score and both should be on the field when the Redskins are knocking on the door. 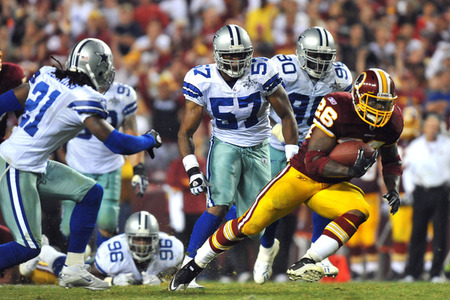 The Redskins probably don't have the firepower to go punch for punch with the Texans. They need to win the time of possession battle by controlling the ball and moving the chains if they want to withstand the offensive onslaught Houston brings.

Washington had 17 first downs and possessed the ball for just under 26 minutes against Dallas. Somehow they managed to keep them off the scoreboard for most of the game, but the Redskins won't win too many games when their opponent dominates control of the ball like that.

To control the clock against Houston, the Redskins will have to establish the run in the first half. Last week, they wore down the Cowboys in the fourth quarter when Portis had about half of his 63 yards, but the rushing game was non-existent to that point. Although it was good to see the offense remain committed to the run throughout the game, the Redskins must run the ball effectively from the first snap of this week's showdown if they want to keep it close.