Age Is Just A Number: The Best Athletes In D.C. History Over The Age Of 35

Share All sharing options for: Age Is Just A Number: The Best Athletes In D.C. History Over The Age Of 35

It's a golden age to be a golden oldie in Washington. At the age of 35, Livan Hernandez is having one of his best years, with a 3.49 ERA, nine wins and a new contract. At a position where speed is everything, Joey Galloway appears to be locked into a roster spot on the Redskins at the young, young age of 39. Even though every team in the area is doing what they can stock up on young talent, veterans are still finding ways to turn heads.
With all the recent success of players still finding success in their later years, let's take a look at some of the finest D.C. performances by players 35 and older on each local squad. 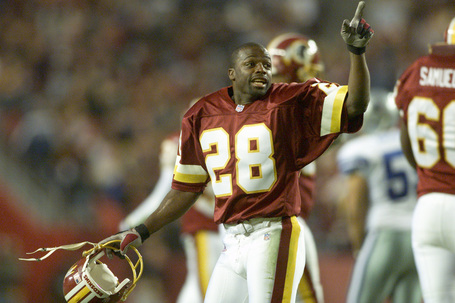 Darrell Green - Probably the athlete most people would point to when they think of a D.C. athlete with staying power, and with good reason. He had 17 of his 54 career interceptions after the age of 35 and made it to the Pro Bowl at 36 and 37. Though he wasn't a regular starter in his final three seasons, his ability to continue to produce at a NFL level in his early 40s is nothing short of remarkable.
Sonny Jurgensen - If you're looking for the most impressive single-season performance by a player 35 or older, Jurgensen takes the prize. Less than a month after he turned 35, he embarked on arguably his best season. He led the NFL in passing yards, completion percentage and pass attempts. For his efforts, he earned a Pro Bowl selection and was named First Team All-Pro at the end of the season.
Chris Hanburger - Though it's tempting to go with Mark Brunell or Todd Collins, who both led the Redskins to the playoffs -- Brunell at 35, Collins at 36 -- we'll give the nod to Hanburger. He was named to a Pro Bowl in 1976 at the age of 35, and played for two more seasons. If it had not been for a bout with appendicitis in 1977, he very well may have been able to extend his streak of consecutive starts from 1968 until the end of his career in 1978.

Adam Oates -The Capitals were, for me, the hardest team to pick just three players from because hockey players age far better than football or basketball players. Chris Chelios retired this week at the age of 48, for crying out loud. But Adam Oates was one of the easiest selections of any player from any of the Big 4 teams.

While many of the other players on this list still had good years after the age of 35, Oates had his best seasons after 35. He is the oldest player to ever lead the NHL in assists, pacing the league at the age of 38 and 39. Granted, he was traded at the trade deadline in 2002, so Washington can't entirely claim Oates' final season leading the league in assists, but he still played 66 games for the Capitals, which is good enough for me.

Dale Hunter - Hunter bridged the gap from the glory teams of the eighties and the Capitals' Stanley Cup run in 1998. Though he wasn't quite the same force he was in eighties, he still provided a steadying force as the team's captain in his later years. More importantly, he found ways to keep his edge in his later years. He logged 442 penalty minutes with the Capitals after he turned 35.

Mike Knuble - It was tough not to go with Peter Bondra here, since he was a stellar player for so long in Washington. But keep in mind, he only played 54 games with Washington after he turned 35 before he was shipped to Ottawa. His numbers were still nice and would have only been better if he had the firepower around him that Knuble had last season, but I'm giving the nod to the man who had the second-highest shooting percentage in the NHL last season. Yes, those numbers are inflated by limiting his shot attempts to close-range shot attempts, but part of getting older is knowing how to play to your strengths. In doing so, he gave the Capitals another dimension and played an important role in the team's success last year. 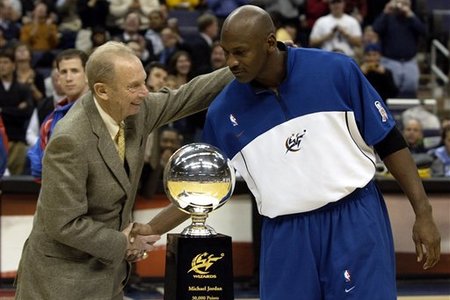 Michael Jordan - Don't let Jordan's dropoff from his Bulls days keep you from appreciating just how good Jordan was in his final days. He may not have been Air Jordan, but he was good for 20 points a game, as well as five rebounds and almost four assists in his final season, during which he turned 40 years old.

For a little perspective, consider that only seven players averaged 20 points, 5 rebounds and at least 3.5 assists last season. The oldest player in that group is Kobe Bryant, who just turned 32 last week. Everyone else on the list was 28 or younger. In a young man's league, Jordan's ability to maintain a high level of production against players who were literally half his age strengthens, rather than weakens, Jordan's image in my mind.
Elvin Hayes - Like Jordan, Elvin Hayes had clearly fallen off by the time he hit the age of 35, but he still put up numbers that most NBA players would covet. Hayes turned 35 in 1980, and was still good for 17 points and nine rebounds in his final season as a Bullet.
Otis Thorpe - Thorpe was the other Sacramento King sent to Washington as a part of the Chris Webber trade and during his one season in Washington, put up some solid numbers. Injuries limited him to only 49 games, but when he played he was good for 11 points and six rebounds per night. He didn't make anyone forget about Webber, but he gave the Wizards a nice stopgap at the power forward position while the team began moving in a new direction.

Livan Hernandez  - Sometimes you have to remind yourself that Livan Hernandez is only 35. He's been getting by on accuracy and a veteran savvy well beyond his years. He won't ever leave anyone wondering if their radar gun is broken, nor will he ever be a Cy Young threat, but his ability to eat up innings is valuable.
When you can count on someone to eat up innings consistently, it puts less pressure on those young bullpen arms to compensate for the starter's misgivings. No, Hernandez couldn't save Stephen Strasburg, but his consistent outings will help the Nationals avoid a similar fate with Tyler Clippard and Drew Storen.
Vinny Castilla - The first National to homer at RFK Stadium, Vinny Castilla was a key cog in the Nationals' flirtation with playoff contention in the first half of the 2005 season. A nagging knee injury kept the 37 year old from finishing the season the way he would have liked, but even still, I like to think he made an impact during his final days as a National, mentoring some young up-and-comer by the name of Ryan Zimmerman.
Hector Carrasco - Like Hernandez and Castilla, Hector Carrasco enjoyed unusual success in the Nationals' first year in Washington. He posted career highs in almost every category at the age of 35. What's especially remarkable about Carrasco's late career renaissance is that he was out of the league just a year before. After a dismal 2003 campaign with the Orioles, Carrasco had to go to Japan to before he got another chance with the Nationals.

Jaime Moreno - No, the MLS' all-time leading goal scorer isn't the player he once was, and won't be coming back next season, but give the man some credit for keeping up at his advanced age. I can only hope that I'll still be able to run around with guys in their early twenties for 90 minutes when I'm 36. 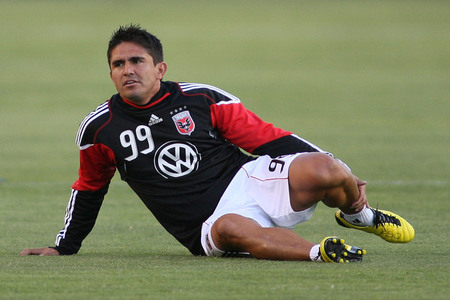