The Redskins took a step backwards in Week 2, thanks in part to their lack of a ground game and their poor defense.

Before we dive into this week's "Chain Reactions," I'm happy to finally see points on the board at FedEx Field by the Redskins. The bitter taste of blowing a 17-point lead should not overshadow the fact that this franchise is a LOT better than it has been in a long time.  However, it is still far from the glory days, as evident by yesterday's second-half meltdown to the Texans.

... with the Redskins lack of a running game.

Passing game gets a passing grade

McNabb was 28-38 for 426 yards and a 119 QB rating with NO turnovers. Better yet, those 28 completions were spread out to nine different receivers, including Joey Galloway. The bomb to Fred Davis reminded me of an old play out of Joe Gibbs' playbook that had Mark Rypien roll right throw across field to Terry Orr. And, of course, there was Clinton Portis with a devastating block to finish off the play.

The student learned a lesson the teacher apparently did not teach

That lesson? Icing Kicker Graham Gano. It proved to be the right call by Texans coach Gary Kubiak, who was being ripped across Twitter Nation for electing to punt and not let Neil Rackers attempt a 53-yard field goal on their first overtime possession. Given a chance for payback, Mike Shanahan passed on icing Rackers on his 35-yard field goal attempt, giving him the one shot at the game-winner.

D for the Defense

Jim Haslett's group won it in Week One, but took a huge step back in Week Two, getting torched for 497 yards passing. This negated the fact that Carlos Rogers was actually able to hold onto an interception.

Any doubt LaRon Landry is the most valuable defensive player on the team?

He misses two snaps, and those two snaps kill the Redskins. Replacement Chris Horton jumped offsides on the first one, and then was beat down field for a big pass play on the second one. 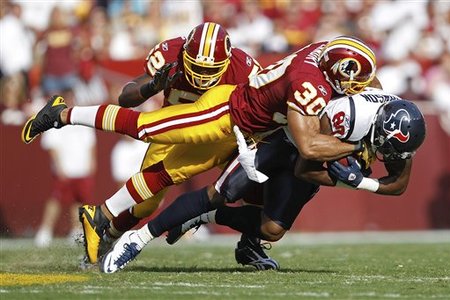 Win as a team, lose as a team

Graham Gano is not the lone culprit in the loss to the Texans. Sure, he missed a chance to win in overtime from 52 yards away on his second take, but do not forget Fred Davis missed a block that caused a Gano chip shot to be blocked in the fourth quarter. That play was set up by a false start on a 3rd and 1 by Jammal Brown. Also, McNabb and Galloway missed by inches on a fourth quarter deep ball that would have sealed the win. There's plenty of blame to be shared.

At least Albert's "headaches" are gone

Albert Haynesworth not playing because of an "ankle" will be second-guessed this week. Certainly, in a game of inches where one player can win or lose a game, it is easy to say No. 92 could have been a difference maker.  However, don't forget how mediocre he was last week against Dallas before you jump back on that bandwagoon.

It should not be shocking that Maryland lost at West Virginia

However, it still has to be frustrating to Ralph Friedgen and his staff because the Terps made it easy for the Mountaineers. There was laundry list of mistakes from missed tackles, blown coverages, costly penalties and a even dropped touchdown by WR Torrey Smith. For those of you that still care, the ACC is just 1-9 against opponents from the other BCS conferences this season. 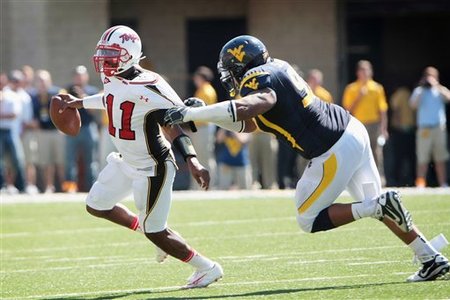 Since the opening week loss to Maryland the Midshipmen have won two straight. Quarterback Ricky Dobbs threw 239 yards in Navy's 37-23 win over Louisiana Tech. Don't look now, but Navy has the same record as the Terps.