Friendship Collegiate is only about a decade old, but its already asserted itself as an up and coming football power in D.C. We talk to head coach Aazaar Abdul-Rahim about what it's like to be the new kid on a very crowded and difficult block.

Friendship Collegiate has had a football team since the school opened its doors in 2000, but that means that the program is still just about a decade old. Friendship has spent the last 10 years trying to prove to everyone in the area -- and itself -- that it belongs in the conversation as one of best teams in Washington. But that is not an easy group to break into.

Two weeks ago, Friendship had a 12-point second half lead over then No. 1 DeMatha, only to give up that lead with a series of costly turnovers late in the game. The final score was 35-32 DeMatha.

Coming within three points of beating one of the best teams in the area is a hell of an accomplishment, particularly for such a young program. But Friendship coach Aazaar Abdul-Rahim isn't satisfied with good enough.

"Maybe three years ago, [it would be]." Abdul-Rahim said in a telephone interview when asked if the loss would be good for his program. "This year, we expect to win every time we come out and play." 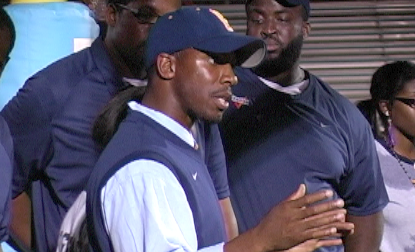 But to beat the best teams in the area, or any team for that matter, Friendship first has to schedule them, which Abdul-Rahim said has been "extremely difficult, to impossible."

"We follow the same rules as D.C. public schools, as well as the catholic schools but because we don't have someone vouching for that outside of Friendship, it's been difficult," he said.

One of the biggest roadblocks is that Friendship doesn't belong to a conference, meaning every school that plays against Friendship must do so outside of its conference schedule.

"Usually teams won't want to face a strong opponent early on in the season," Abdul-Rahim said. "Or, coaches maybe view it as they definitely want to win their out of conference games."

"I think as a coach you should want to compete and play against some the better teams, and I don't think all coaches really view coaching in high school football like that."

You can see Abdul-Rahim's philosophy in the games he schedules for his own team. Because the school does all scheduling on its own, there is no governing body that ensures it gets a full slate of games to play. Friendship will play any team, whenever Friendship can fit it into its schedule, but it prefers to play the best teams when it can.

As a result, Friendship find itself between a rock and a hard place. It wants to play the best teams so that it can prove it belongs, but the best teams don't want to play a team that is playing with so much at stake and nothing to lose. 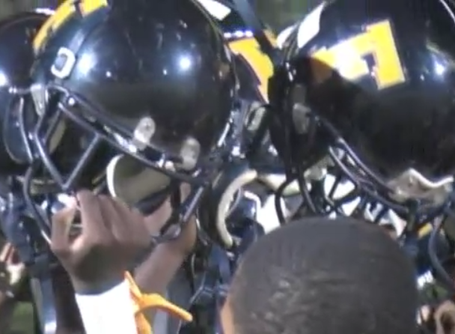 Which brings to light the bigger issue at stake: the position of charter schools in the greater D.C. athletic scene. As of right now, they don't really belong to anybody. But Abdul-Rahim is confident in what the future holds for these schools that have been struggling to find their way.

"[New D.C. mayor Vincent Gray] has assured me that he's going to do something about charter school athletics," Abdul-Rahim said. "I don't know if that means going into the DCIAA or just creating oversight for charter schools with another organization so that other school districts will recognize our governing body, but I think that will help our program a lot."

But even the disorganization in the charter school system hasn't stopped Friendship from growing, both as a legitimate football threat and a program that enables student athletes to get the most out of their opportunities.

"I'm more proud of the amount of kids that are in college and are playing college football," Abdul-Rahim said. "I think our championship is on signing day when we're on stage and we have nine or 10 kids that are getting a free education."

Friendship bounced back from that loss to DeMatha with a win last week over West Virginia school Wheeling Central Catholic on the road, which shows you the kind of hoops it has to jump through to put together a full schedule of games every year. Friendship now stands at 3-1, with another away game against Wyoming Seminary College Prep in Pennsylvania tomorrow.

I consolidated the Performance and Player of the week awards this week for a couple reasons. I needed to talk about what Darius Jennings just did to Dematha, but I also had to give him credit for doing it to top ranked teams all season long. He's been too good to focus on anyone of his performances, so we're gonna go mega award this week and devote the whole thing to Jennings.

We'll start with the performance

The DeMatha Stags started off the season as the second ranked team in the D.C. area by The Washington Post, but they quickly rose to number one when Good Counsel lost in the second week of the season. That's a spot DeMatha is used to occupying. The Stags almost lost it when Friendship gave them the scare we talked about earlier, but they found a way to hold on.

They were back at it this past week against Gilman, the top team in the Baltimore area and one of DeMatha's best in-state opponents. There's a lot of bragging rights on the line when these two teams play, as they both represent their city's football tradition.

It was expected to be a hard-fought, closely contested game between two teams that wanted to prove something to one another. As is usually the case when expectations get as high, the product itself was a bit of a disappointment, at least in terms of competitiveness. That was mostly due to the efforts of young Mr. Jennings.

Jennings rushed for 276 yards on 31 carries, doing much of his damage in the first half when Gilman was able to build a quick 14-0 lead. His longest rush was only 11 yards, but he was just relentless in wearing down a DeMatha defense that has proven to be much less stingy than it appeared heading into the season.

DeMatha was able to bottle Jennings up in the second half, at least better than they did in the first, but the Stags were never able to overcome the deficit they dug for themselves in the first stanza. The final score was 35-10, and it wasn't really even that close.

Darius Jennings is also the Varsity News Player Of The Week this week because he's made a habit of turning in performances like the one that earned him the previous honor. A few weeks ago we gave Gilman our team award after it knocked off Good Counsel, the loss that allowed DeMatha to overtake the top spot in the Post Poll, and another game that was decided in large part because of the running exploits of Jennings.

Darius Jennings is the main reason Gilman is off to such a great start. I know the school is in Baltimore, but it has twice beaten the top-ranked school in the Washington area. This means he's eligible to be mentioned in this column, and apparently take the whole thing over.

There's a very simple explanation as to why the Episcopal boys soccer team is the Team of the Week award winner, and it has to do with the number 51.

Fifty-one is the number of matches Episcopal has gone without suffering a loss. Sure, it has had two ties last year if you want to nitpick, but it hasn't been in the short end of a match since 2007. Hollywood was still making Bourne movies in 2007.

On Wednesday, Episcopal put its streak on the line in a non-conference game against Gonzaga, which has won the last four WCAC soccer titles. Episcopal flexed its muscles and walked away with a 3-0 win.

But it isn't just the streak that lands Episcopal here. According to Paul Tenorio of the Washington Post, this past game against Gonzaga wasn't just a normal game on the schedule, it was one Episcopal had been waiting a few years to schedule.

"We've been waiting for this game, we've been trying to schedule the game since before I came here but because of games we had in IAC and other tournaments we couldn't fit the match in," Ntokozo Tshuma (An Episcopal midfielder) said. "But Gonzaga has been a good program in soccer and we scheduled it just to test us this season and just prove ourselves. It was a game to prove ourselves, that's why we had a lot of fans coming out because everyone knows Gonzaga is good and we are trying to prove ourselves, [prove] that we're better."

Episcopal deserves a lot of credit for refusing to rest on its laurels, even when its laurels look so darn comfortable. Going out of the way to play difficult opponents when it has nothing left to prove is what makes Episcopal our team of the week. (Because a 51-match winning streak clearly isn't enough on its own. We have high standards over here).

Last Tuesday, a few Pallotti football players decided to hang around the locker room after practice to make a rap music video. That was their first mistake. Their second mistake was publishing that video on YouTube.

It didn't take long for that video to get back to the school's administration. They have since removed the video from the web, and decided the school would forfeit its next game in response, claiming that the video contained obscene language, and was degrading to women.

Since the video is no longer available  anywhere on the web (believe me, I've searched extensively) we'll never know just how offensive it was, or how ill their flow was. The only thing left to remember it is the loss Pallotti took without even taking the field.

This Weeks Games To Watch:

Some teams get all the breaks. Osbourn took Osbourn Park's quarterback this summer, and now Osbourn has home-field advantage when the two rivals meet this weekend.

Dominique Terrell, who now orchestrates the Osbourn triple option offense, transferred from Osbourn Park shortly before the season began. He has led Osbourn to a sparkling 4-0 record so far this year.

Osbourn Park hasn't been as good as it would like to be, sitting at just 1-2, but the defense has been very tight this year. If it can contain Osbourn's rushing attack, maybe force a turnover or two, then who knows. They might be able to throw enough points on the board to pull a big upset.